Edna Pontellier’s unwomanly vocation in ‘The Awakening’ by Kate Chopin

In Kate Chopin's 1899 novel "The Awakening", the protagonist, 28-year-old Mrs. Edna Pontellier, is bored to distraction by marriage and motherhood. She does not feel like one of the "mother-women," whom she perceives as those "who idolized their children, worshiped their husbands, and esteemed it a holy privilege to efface themselves as individuals and grow wings as ministering angels." Instead, Edna becomes increasingly interested in realizing herself as an individual.

To her, becoming an individual involves artistic expression. The crafts that are socially permitted to women like herself do not entirely fulfill her desires, at least insofar as she must remain faithful to a restrictive gender role and cannot use the art to discover herself. Listening to children's recitals and knitting winter garments while it is still summer on the Louisiana bayou leaves her artistic needs unfulfilled.

The book raises the issue of how Edna's fellow white society-members treat their black servants, especially where crafts are concerned. This is not overt, but is embedded in the way Kate Chopin turns her phrases. In one paragraph, Chopin places the character "Madame Lebrun" at a sewing machine, with "a little black girl" under it at the pedal, accompanied by the comment that "The Creole woman does not take any chances which may be avoided of imperiling her health." The comment exposes the ridiculousness on two counts: first, that a woman might be injured or exhausted by pushing her own pedal while sewing, and second, that the mature white woman is concerned for her own well-being but not for that of a young black girl who could easily be accidentally kicked.

In another paragraph, "two black women" make ice cream for party guests. As Chopin was writing in the nineteenth century, she did not bother to say, but the modern reader must infer, that making ice cream was an especially laborious process before the invention of electric refrigerators. The white man watching over the servants' work is depicted as "proud of his achievement."

Thus, even where crafts like sewing or dessert-making could be a form of artistic satisfaction among the white elite, these jobs are outsourced to black servants, and the white people do not fully acknowledge how they have partially removed themselves from the artistic process.

At one dinner party, everything changes for Edna. A woman plays the work of the composer Frédéric Chopin, sending "a keen tremor down Mrs. Pontellier's spinal column." The tremor is a joint product of the artist and of the appreciator. "Perhaps it was the first time she was ready" to hear it, the writer muses, "perhaps the first time her being was tempered to take an impress of the abiding truth." 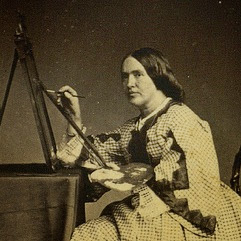 Later, when Edna tells this same pianist that she has taken up painting, the pianist responds reflexively that Edna has "pretensions" for thinking of herself as an artist. This comment sticks with Edna, who later forms a response to it in her own mind: "The artist must possess the courageous soul that dares and defies."

As a young woman, Edna gave up "the realm of romance and dreams" and married a wealthy man to "take her place with a certain dignity in the world of reality." But what is dream, and what is reality? Her father believes that "authority, coercion" are needed to "manage a wife"; her doctor believes that women are "moody and whimsical"; her husband insists that her wifely duties should be prioritized above her art. She begins to wonder if this is not the only world available to her. "I suppose this is what you would call unwomanly," she says, "but I have got into a habit of expressing myself."

Married to a man whose possessiveness and direction offends her, she "began to feel like one who awakens gradually out of a dream...to feel again the realities pressing into her soul." Her wealthy husband provides for her "external existence." But what of her internal existence, her identity? In a fit of frustration, she stomps on her wedding ring and smashes a glass. She perceives that her need to express herself as an individual is suddenly more real than any pragmatic concerns. One such "reality" is her acknowledged "symptoms of infatuation" for another man.

Edna earns enough money selling her sketches to move into a separate house, leaving her husband and two young children behind. She is haunted by the voice of a younger man she adores; his voice is "not pretentious," "musical and true."

The novel's title, "The Awakening", refers to Edna "beginning to realize her position in the universe as a human being, and to recognize her relations as an individual to the world within and about her." Her husband unfortunately "could not see that she was becoming herself and daily casting aside that fictitious self, which we assume like a garment with which to appear before the world." Indeed, "her own soul had invited her" to find "the deeper undercurrents of life." Her growing artistic sensitivity plays a central role in her awakening.