Why the US scuttled the rainbow-colored terrorism threat chart 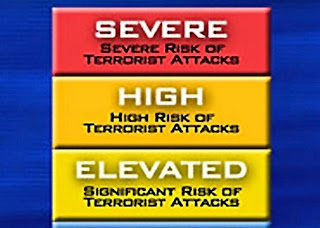 The new National Terrorism Advisory System (NTAS) took effect in the United States on April 26, 2011. It replaced the Homeland Security Advisory System (HSAS) which was introduced on March 12, 2002 by a presidential directive.

History of the iconic rainbow-colored chart

HSAS was originally developed by the U.S. Department of Homeland Security to warn the public of the possibility of imminent terrorist attack. It was represented by the iconic rainbow-colored chart in which red is "Severe," orange is "High," yellow is "Elevated," blue is "Guarded" and green is "Low." With yellow as the default, the threat level was raised to orange five times in the first two years. Each of these so-called "orange alerts" lasted an average of 19 days and did not specify the nature of the threat about which the public was supposedly being warned.

HSAS subsequently began to provide more information about the threats. Only days after the Democratic National Convention in 2004, there was an orange alert that lasted 102 days regarding the financial services sectors in New York, New Jersey and Washington, D.C. This alert was based largely on intelligence that pre-dated 9/11. In 2005, an orange alert for mass transit lasted 36 days. In August 2006, all commercial flights were placed on an orange alert which was never lifted until the HSAS was dissolved in April 2011.

Critics complained that the color-coded HSAS was vague and offered no practical guidance that individuals could use to protect themselves. "The terror alert system may be contributing to the very panic and confusion in our society that the terrorists seek to generate," Sen. Frank Lautenberg, D-N.J., said in a press statement in 2003. In a 2005 op-ed for the New York Times, Stephen E. Flynn, of the Council on Foreign Relations, complained U.S. intelligence is not actually able to analyze information quickly enough to provide useful public warning and that the government should not portray a monolithic threat level when certain areas are at more risk than others. Flynn cited figures that show a public outlay of about $10 million for each day the country is on "orange alert."

On July 14, 2009, DHS Secretary Janet Napolitano announced there would be a 60-day review of the effectiveness of the HSAS. A month later, former DHS Secretary Tom Ridge alleged he had been pressured to raise the threat level the night before President Bush's re-election in November 2004. (He said the incident was detailed in his forthcoming book "The Test of Our Times.") Although alerts could be issued without Ridge's approval by the members of the Homeland Security Advisory Council - who, at the time, included Attorney General John Ashcroft, FBI chief Robert Mueller, CIA director George Tenet, Defense Secretary Donald Rumsfeld and Secretary of State Colin Powell - Ridge said he successfully argued against raising the threat level in Nov. 2004. The orange alert was actually lowered to yellow on Nov. 10, and Ridge announced his resignation on Nov. 30.

The introduction of a new system

With Napolitano's acknowledgement that HSAS "has faded in utility except for late-night comics," her task force recommended eliminating the never-used lower levels of blue and green. The new NTAS system unveiled on April 20, 2011 reduced the number of alert levels to only two. Under the new system, there is no default alert level. If there is a specific threat, an alert will be issued on either the "elevated" or "imminent" level (the latter being the more severe). Details specific to the threat will be announced on television, radio, Twitter, Facebook, and on www.dhs.gov/alerts. If there is no reason to extend the alert, it will automatically expire after two weeks.

The system is improved

Andrew McCarthy, a former federal prosecutor who went after suspects in the 1993 bombing of the World Trade Center, told Fox News: "I never thought that color coding made America safer to begin with." Many Americans held the same opinion, and they were probably right. The average airplane passenger has all but forgotten that the permanent "orange alert" was removed in 2011, and air travel seems no more risky today for its lack of a color-coded fear level.

Trump’s War is suffused with “war on terrorism” rhetoric. The deployment of officers into cities is a “surge.” The New York Post labels demonstrators damaging property as “insurgents.” The Pentagon calls protesters and journalists “adversaries.” The Department of Homeland Security circulates “Baseball cards” identifying protesters, as the military did for former ministers and generals in Saddam Hussein’s government in Iraq and al-Qaeda terrorist leaders.