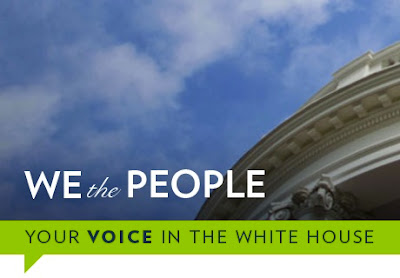 The U.S. White House website contains a petitions section that allows anyone to create a petition and gather signatures with the goal of obtaining a response from the White House. Suddenly, since the inauguration of Donald Trump, these petitions aren't working. Bug or feature?

The site promises: “Petitions will only be removed under the Moderation Policy — no petition will be removed because of the viewpoint it expresses.” This assurance was still available as of Jan. 27, 2017, one week after Donald Trump was inaugurated as President. Nonetheless, a number of people noticed that certain petitions did not seem to be working.

"received hundreds of tweets from proud signees but the official count (at the time of writing) reads: '27 signed'." Jillian Steinhauer wrote for Hyperallergic on Jan. 25 that it "shows only 44 signatures, despite hundreds of people having tweeted that they signed it. Many have noticed the discrepancy, with one tweeter claiming that the petition had nearly 100,000 signatures yesterday [Jan. 24]; another says the number was originally in the tens of thousands. The other petition shows 734 signatures, a small climb from the 724 listed earlier today, but does not seem to be accurately counting those who’ve signed based on the sharing rate suggested by social media. It also appears to have been set up only after a previous petition vanished."

Update: On Jan. 28, the count was at 176 and it was visible on the White House petitions webpage. An attempt to sign it was successful, incrementing the count to 177.

Not all petitions were working as of Jan. 28, however. For example, a petition titled "End the media blackout on the Environmental Protection Agency (EPA)" created on Jan. 25 still displayed only 1 signer as of Jan. 28, despite repeated attempts by several people to sign it. Accordingly, it showed the counter: "Needs 99,999 signatures by February 24, 2017 to get a response from the White House." Similarly, "To explain to the American people why President Donald J. Trump is such a needy little bitch," created Jan. 23, only had 1 signature five days after its creation, despite having a link distributed in a BuzzFeed article. That, to be fair, runs afoul of the site's 'Terms of Participation' banning "Defamatory or fraudulent statements" and "Terms commonly understood to constitute profanity or abusive or degrading slurs or epithets," but that does not fully explain why the petition still exists and is simply apparently not working.

Blake Montgomery wrote for BuzzFeed: "President Obama’s administration created We The People in 2011...whether the Trump administration will respond to petitions is unconfirmed. On the day of his inauguration, Trump’s administration archived all existing petitions on the platform." In other words, the Trump administration is not accepting new signatures on any petition created during the final days of the Obama administration, and one may speculate that they may not intend to respond to any of those petitions that may have reached the 100,000-signature goal. In that article, a White House spokesperson was quoted as attributing the malfunction to a technical bug: “It’s a question of high volume at the end of the day, but the signatures are being captured. Because of high volume they’re having to change how they’re being captured.”

Under this administration, technical difficulties — or, depending on your interpretation, diminished accountability to public comment — are not limited to the petition website. "Since at least the end of the Obama administration," Tyler Pager wrote for the Boston Globe on Jan. 26, "the White House’s phone line for comments has not been taking calls. It is unclear exactly when the line was closed, and it is equally unclear when it will be back." A recorded message directs callers "to send us a comment online...or send us a message through Facebook messenger.'"

As quoted in an LA Times article about the closing of the telephone comment line on Mon. Jan. 23, the first business day after the inauguration, press assistant Giovanna Coia said, “We’re still learning how to work our computers."

Update: People were calling the Capitol about their political concerns even though they couldn't call the White House. U.S. Sen. Brian Schatz (D-HI) tweeted at the end of the day on Feb. 2: "The last three days have been the BUSIEST IN CAPITOL SWITCHBOARD HISTORY. By almost double."

The following table shows all available petitions on the White House website as of Friday night, Jan. 27 and continuing through Sat. morning, Jan. 28. During this brief time period (about 15 hours, overnight), only one petition newly reached the 150-signature threshhold to be published to the site. This was the "Preserve the National Endowment for the Arts and the National Endowment for the Humanities" petition referenced above, suggesting that it may be necessary for the White House website to receive negative press from an internationally recognized newspaper like The Independent before any specific petition will be published. Also during this time, no petitions newly crossed the 100,000 signature threshhold. Only two had over 100,000 signatures, and both of them had been created on Inauguration Day, Jan. 20, suggesting that the new administration had not yet begun to change the way the petition site worked.

The domain WHPetitions.info, purchased in 2013, contains simple content that appears to confirm the above. It says: "Helping the White House keep its promise" and as of Jan. 28, 2017 it indicates that "0 White House petitions have met their signature thresholds". It appears that some values are supposed to auto-calculate, as suggested by what appears to be bogus output as a result of calculating with 0. "The White House has responded to 0 of them (-9223372036854775808%) with an average response time of -106752 days". The site credits Eli Dourado, whose active Twitter account identifies him as an "economist working on accelerating the pace of technological change."

No petitions were given responses in 2017, although some had crossed the threshold number for earning a response. Around New Year's 2018, the following message appeared on the homepage:

To improve this site's performance, the platform is currently down for maintenance and will return in late January.

All existing petitions and associated signatures have been preserved and will be available when the site is relaunched. Following the site's relaunch, petitions that have reached the required number of signatures will begin receiving responses.

When visited Feb. 27, the petition site was back online. Seven petitions had received responses from the White House.

By May 4, no additional petitions had received responses. There were 44 active petitions, 13 of which had long since reached their signature threshhold and were due for White House responses, and the remainder of which were still in their 30-day period to reach the threshhold.

By February 22, 2019, no additional petitions had received responses. There were 71 active petitions, 27 of which had reached their signature threshold and were due for White House responses.