On March 1, 1896, the Battle of Adwa "cast doubt upon an unshakable certainty of the age – that sooner or later Africans would fall under the rule of Europeans." In this battle, Ethiopians beat back the invading Italians and forced them to retreat permanently. It was not until 1922 that Benito Mussolini would again initiate designs against Ethiopia; despite Ethiopia's defeat in 1936, the nation ultimately retained its independence. "Adwa opened a breach that would lead, in the aftermath of world war fifty years later, to the rollback of European rule in Africa. It was," Raymond Jonas wrote, "an event that determined the color of Africa." (p. 1) It was also significant because it upheld the power of Ethiopia's Christian monarchy that controlled an ethnically diverse nation (p. 333), a nation in which, in the late 19th century, the Christian Emperor Yohannes had tried to force Muslims to convert to Christianity. (p. 36)

The Victorian English spelling popular at the time was Adowa; in Italian, it was Adua.

All page numbers, unless otherwise noted, are from Raymond Jonas's book The Battle of Adwa: African Victory in the Age of Empire. All the information presented here comes from this book. 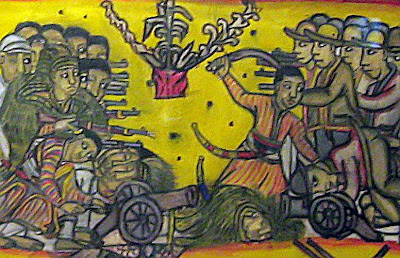 The Italians turned their defeat at Dogali into a rallying cry. On Jan. 25, 1887, they defeated the Ethiopians at Sahati, but the next day, five thousand Ethiopians confronted a force of only "540 Italians and fifty native soldiers." Only 80 of the Italians survived. The five hundred dead were lionized back in Italy, where they were referred to as the cinquecento. Their names were inscribed under an obelisk that had been brought back in ancient times from Egypt to Rome. The designer's "inspired choice" of the obelisk "suggested continuity between old Rome and a new Rome being born," Jonas wrote. Today the square is still known as Piazza dei Cinquecento. Italy used the defeat to drum up support for increasing their military conquests in Ethiopia. (pp. 40, 42)

Following Emperor Yohannes' combat death in 1889, Menelik became the Ethiopian emperor, calling himself "negusa negest, king of kings" (p. 72). He had a "carefully cultivated image as a wise, humane, and Christian African leader," yet his rule was marred by a laxity in enforcing laws against slavery; basically, he tolerated the enslavement of Muslims, prisoners of war, and "domestic servants." (p. 56) One issue was that Menelik tended not to pay his soldiers, so they tended to loot the property of the people they defeated, as well as seizing the people that were already enslaved by the defeated people. "Richard Pankhurst, in his magisterial Economic History of Ethiopia, cites a source to the effect that a slave caravan left Shoa every three months in the 1880s. By the mid-1890s, Menelik was actively suppressing the trade, destroying notorious slave market towns and punishing slavers with amputation." However, Jonas continues, "slavery persisted as a feature of the gift economy: enslaved people remained a staple of imperial largesse under Menelik — as wedding gifts to friends of the court, for example — as late as 1903." (p. 81)

In late 1895, Menelik began moving soldiers north of Addis Ababa. The volunteer Ethiopian soldiers were fed by the villages they happened to pass through, and they were paid only in terms of what they could strip from dead bodies. This included cash, weapons, and things of symbolic value. Eventually, on March 1, 1896, they met and defeated the Italians at the Battle of Adwa.

The Italians were fighting with the assistance of askari — local Ethiopian mercenaries, who, for their own independent reasons, preferred to work for the Italians.

What's the meaning of battlefield castration?

Sending soldiers home alive with any kind of mutilation creates a lasting reminder of the nation's defeat in that battle. Because the castrated soldier would never reproduce again, Jonas says, the mutilation "exacts a price not only a man but also on a people." He added: "Even on the battlefield the distinction between real and symbolic gestures never entirely breaks down."

But usually soldiers would not survive such a wound (assuming it had even been perpetrated on their living body; more likely, it was perpetrated on their corpse). In that case, it is a souvenir of the killing. Castration, Jonas says, proved that the fallen enemy had been male, subjugated in battle, and (by suggestion) lacked valor. Since only one scrotum can be taken per victim, it is "metonymy – a stand-in for the entire subjugated body of the vanquished." (As does a severed head, let's say.)

And for the Ethiopians, specifically, what did it mean?

In Ethiopia, the castration of an Italian symbolically paralleled "the political emasculation of Ethiopia that Italian rule would have entailed." The body parts, as relics, may also have been considered in the late 19th century to possess "talismanic, restorative, or therapeutic qualities." According to Vanderheym, the argument from reproductive control was used by the Ethiopians themselves.

Jones says that castration was a powerful and effective threat to soldiers during combat, particularly when coupled with the belief that only men who refused to drop their weapons would be subject to castration. Also, he points out that Ethiopians, living under a Christian emperor, would have heard of the Biblical passage that prohibited castrated men from entering "the assembly of the Lord." (Deut. 23:1) He said that some of them saw David's killing and circumcision of the Philistines (1 Samuel 18:27) as a reference to castration. It was not only Christians who engaged in the practice, as many of the soldiers who practiced castration were Muslims in the Oromo cavalry, who decorated their horse's necks "with daisy-chained scrotums". Edmond Combes and Maurice Tamisier reported in their Voyage en Abyssinie (Paris: L. Desessart, 1838, 2:322-323) that the Oromo's enemies had a song describing the wives of castrated Oromo soldiers as "widows whose husbands are still alive." (in Jonas, pp. 223-228)

Ethiopians did not typically take prisoners, even for criminal violations (in which case there would be "literal or symbolic restitution," potentially including capital punishment, instead). (p. 223) Curiously, in the rare case that an Ethiopian was sentenced to imprisonment, the prisoner would be dropped in a natural stone cell in an amba (mesa, as Ethiopia is a country at high elevation) reachable only by a rope and guarded by eunuchs. "Emasculation was a condition of employment; the position meant job security for life." (p. 224, citing Augustus Blandy Wylde, Modern Abyssinia (London: Methuen, 1901), p. 310) Ethiopians usually either killed or enslaved the soldiers they defeated. However, when Menelik said, "Bring me the man, not the testicles," he was asking for prisoners.

At Adwa, 1,900 Italians and 1,500 of the askari who served with them were taken prisoner. The askari were punished for their treason by amputation of their right hand and left foot. The Italian prisoners were to be used to bargain with Italy for their safe return. (pp. 233-235) Eduardo Ximenes buried the Italian dead at Adwa and said that about half of the forty corpses buried one day were castrated. Furthermore, 30 of 461 wounded Italians who returned from Adwa were castrated, according to the historian Raffaele Ciasca, writing in 1938 in Storia coloniale dell'Italia contemporanea: da Assab all'impero. (p. 227) The Ethiopian dead were never counted. (p. 198)

Alberto Woctt, a captain in General Dabormida's brigade, saw "mutilated bodies" illuminated by "a horrifying whiteness under the silver moonlight." The sergeant Giovanni Tedone – who was "quite possibly a victim of such practices," according to Jonas (p. 226) – described the mutilation as "two lateral cuts, and then a cut from the bottom up and that's it." Tedone claimed that it did not usually lead to blood loss if it was done properly. He reported seeing one wounded soldier who had been stripped and castrated but left alive; he described the wound as yellow in color, and the man calling for water modestly covered the wound with his hand. Luigi Goj, a soldier who surrendered, heard someone calling for water ("acqua") from a pile of dead bodies, and he saw it was a man who was "horrible to say it – emasculated." (pp. 221-223) After the battle, Tedone spent time in a village in Harar where the most powerful man in the village was ever trying to demonstrate his manliness to Tedone, and who said, after one successful spear-throwing contest, "At Adwa, I killed eight Italians and I castrated them," and he showed off a necklace of scrotums. (p. 259)

Jonas mentions a few of the associations that Europeans had with punitive castration. In 12th century Paris, Abelard was castrated to punish him for his affair with Heloise. Again, in Paris, during the massacres of St. Bartholomew's Day in 1572, the corpse of the Protestant admiral Gaspard de Coligny was castrated, and, in the Paris Commune revolt on 18 March 1871, Georges Clemenceau reported seeing children "waving indescribable trophies" from fallen men. In Britain, following the foiled, treasonous Gunpowder Plot of 1605, the perpetrator was sentenced to castration and then execution. In the United States, castration was often part of lynching. This is described in William Faulkner's novel Light in August. (All of these references are on p. 225. St. Bartholomew's Day and the Gunpowder Plot are cited to Gary Taylor's Castration, p. 57. The quotation about the Paris Commune revolt was cited to Jean Martet, Le silence de M. Clemenceau, Paris: Albin Michel, 1929, pp. 293-299.) Apart from punitive castrations, Jonas neglects to mention a broader association with castration that was specific to Italy: Boy sopranos were castrated to maintain their voices, a practice outlawed by the government of Italy only 26 years prior to the Battle of Adwa.

Whether informed by their own history or not, Europeans complained about Ethiopia's practice of slave trade and castration of fallen soldiers. These were "invoked as examples of 'Abyssinian barbarism' and exploited as such to justify European pretensions to a civilizing mission." (p. 223) As a result, the Christian Emperor Tewodros, whose rule began in 1855, "decreed the abolition of the slave trade in Ethiopia" and "outlawed the soldierly practice of taking trophies – via castration – from the bodies of fallen enemies." (p. 14, citing Parliamentary Papers, Correspondence Respecting Abyssinia, 1846-1868 (London: Harrison and Sons, 1868), pp. 77, 146 and Clements R. Markham, A History of the Abyssinian Expedition (London: Macmillan, 1869) pp. 59-60.] The British consul at that time was Walter Plowden. He applauded Tewodros for having "signalized his career already by two great acts – the abolition of the Slave Trade and of the barbarous mutilation of fallen enemies." (p. 223, citing a letter by Consul Plowden to the Earl of Clarendon. Massawa, 3 March 1855, in Parliamentary Papers, Correspondence Respecting Abyssinia, 1846-1868 (London: Harrison and Sons, 1868), p. 146 and Sven Rubenson, King of Kings: Tewodros of Ethiopia (Addis Ababa: Haile Selassie I University, 1966, esp. 55) Jonas points out, however, that both of these practices continued under Tewodros, Yohannes, and Menelik. (p. 223) Menelik's soldiers commonly did it to their Welayta enemy in 1894-5, according to Jean Gaston Vanderheym, who traveled with Menelik's army. (p. 226-227) Jonas said that "the pratice proved to be too deeply embedded in the warrior culture of Ethiopia" for Menelik's edict to have any effect. (p. 228) In some cases, an Ethiopian soldier might even have been willing to commit fraud by castrating fellow fallen soldiers rather than enemy dead (see Augustus Wylde, Modern Abyssinia pp. 388-389).

Raymond Jonas. The Battle of Adwa: African Victory in the Age of Empire. Cambridge, Mass.: The Belknap Press of Harvard University Press, 2011.

- May 25, 2015
Email ThisBlogThis!Share to TwitterShare to FacebookShare to Pinterest
Labels: adwa, castration in battle, eunuchs in italy, orthodox christianity