Frank Cauldhame: Murder 'was just a stage I was going through’ 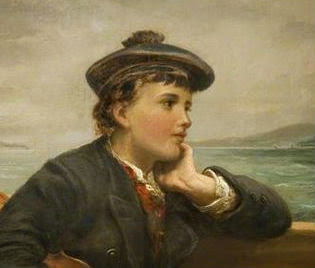 Frank Cauldhame is the fictional narrator of "The Wasp Factory," a novel by Scottish author Iain Banks (1954-2013). Published in 1984, it won the Kurd-Laßwitz-Preis in 1992. It is a controversial novel because of its graphic, unremitting depictions of animal and child abuse.

Frank's character, born in 1964 and "nearly seventeen" when the book opens, appears to be a psychopathic teenager enduring childhood traumas with a flat affect. He perpetrates crimes against others with no conscience. The main problem that drives his unusual personality is only partially known to him and is not fully revealed to him and the reader until the end of book. Because of his lack of self-awareness, Frank may be considered an unreliable narrator.

Frank reveals at the beginning of the book that he killed a playmate, a brother and a cousin in separate incidents, the last murder occurring in 1973. The manners of their deaths are revealed over the course of the novel. In no case did he use his own hands or a weapon to directly injure his victims. Instead, in all cases, he abused the victims' trust and engineered booby traps in which the victims' actions triggered their own deaths. Each scenario was more elaborate than the last. However, he does not intend to continue, he assures the reader: "It was just a stage I was going through."

Frank had an atypical childhood. His parents did not register his birth, so he has no legal documentation, "nothing to say I'm alive or have ever existed," and cannot attend school on the Scottish island where he has always lived. Publicly, he is supposed to pretend that his father is his uncle and that his brothers are his cousins. He is unclear what his father does for a living. His mother abandoned the family long ago, and he cannot remember her. His older brother, the one he didn't kill, is mentally unstable. Noting that his father keeps an explosive in the basement, Frank interprets it as "something about a link with the past, or an evil demon we have lurking, a symbol for all our family misdeeds; waiting, perhaps, one day, to surprise us."

There are additional stresses. When he was three years old, the family dog, Old Saul, bit off his genitals, according to family lore. His father shot the dog, recovered the body parts from his stomach, and preserved them in alcohol. This was said to occur on the same day that his brother Paul was born and their mother abandoned the family. His father only pokes fun at his castration, occasionally making comments that refer to "better men than you." Frank refers to the matter as his "little accident" resulting in his "unfortunate disability" and "my loss"; he is "not a full man," but perhaps "an honorary man" with "uncastrated genes." Based on what he believes about his hormones, he complains about being "too plump," and would prefer to look "dark and menacing" as he feels would befit a murderer. "It isn't fair," he says.

Faced with this double erasure of his existence – no legal substantiation of his family relationships or his right to attend school, and no physical testimony of the gender to which he believes himself to belong – Frank craves power. He is impressed by the power of the sea. "It does things to the world, and so do I; we should both be feared." His only friend is Jamie, identified as a "dwarf," whom he sometimes carries. After committing his first murder, Frank lies to a playmate and says that the "accidental" death appeared to be a judgment from God, clarifying that "the one I believed in was" a god who would mete out judgment like that. His father, by contrast, he says, only enjoys "little bits of bogus power" by attempting to keep secrets from him. These details reveal how he interprets life in terms of power that can be exerted.

With some frequency, Frank contradicts himself. Of his brother Eric, who burns dogs and sheep, rants and raves, and has been committed to a psychiatric hospital, he says: "He is mad and I am sane." The assertion of sanity is not convincing to the reader, arriving, as it does, immediately after the comment: "I would try to contact Eric through the skull of Old Saul." (Frank dug up the skull of the dog he believed castrated him, places a candle in it, and uses it as an occult device for spiritual communication.) He feels that one of his powers is "imaginative intelligence" and that, if he can't use it to deal with Eric, "then I deserved to be destroyed." Diagnosing himself as sane while reporting many details that imply the contrary is one way in which Frank is unreliable.

Another contradiction is his misogyny. He claims that women, who he knows best from fictional representations, "cannot withstand really major things happening to them" without breaking down and committing suicide. He acknowledges, however, that his own male relatives – not the female ones – committed suicide. Other assumptions about women's weakness compared to men is demonstrably untrue (including by using his own life as a counterexample, for reasons to be seen later).

While he claims that "there has always been a part of me which has felt guilty about killing Blyth, Paul and Esmerelda," this conscience, like an "opposition party in a parliament," is "not in power and unlikely to assume it." Later, he contradicts his own claim to having any conscience at all: "I am convinced that only my genuinely clear conscience let me convince the adults around me that I was totally innocent." He pretends to feel guilty about not being able to save his brother only for the purpose of throwing the adults off his scent. He even details a "romantic vision" of his cousin's final hours, saying, "I would like to think that...she died of starvation and dehydration..." This does not sound like guilt.

He excuses the murders with the analysis that "children aren't real people." They are "a separate species" that will one day become adults. This is an odd comment coming from a teenager, especially given that he was a child himself when he murdered three other children.

And, while his first murder was an act of revenge against a child who had burned rabbits, Frank himself burns rabbits, years later, and takes satisfaction in it. For all of these reasons, it is hard to trust what Frank says. However, he is the reader's only source of information about his life.

No longer a psychopath?

At the very end of the book, after learning that he is female, born with the name Frances, the character seems to soften. "My fathers' truth has murdered what I was," he says. He acknowledges his past crimes as "appalling" and begins to analyze his motivations for having killed: maybe he wanted to prevent other children from becoming adults, as he felt he had "no purpose in life or procreation" and regretted that he could not become an adult himself. ("There wouldn't be much point to me getting married perhaps," he said earlier in the book.) "I believe that I decided if I could never become a man, I – the unmanned – would out-man those around me, and so I became the killer, a small image of the ruthless soldier-hero almost all I've ever seen or read seems to pay strict homage to." The truth was always available to him, in his own body, but he never wanted to see it. "I was proud; eunuch but unique; a fierce and noble presence in my lands, a crippled warrior, fallen prince...Now I find I was the fool all along."

This transformation of the character at the end of the novel is a bit unrealistic. In real life, psychologists believe that the lack of a conscience is an inborn trait. It can be somewhat exacerbated or softened by parenting or culture, but it is basically unchangeable. The emotional abuse of Frances wrought by her father's story that she was a castrated boy would not be expected, on its own, to turn her into a psychopath, nor would the revelation of the truth be expected to cure her psychopathy. However, "The Wasp Factory" is probably not intended as a representative depiction of teenage psychopaths. It is, instead, a symbolic exploration of various kinds of power dynamics and the effect of family secrets.