The many literary works of Sir Richard Francis Burton

In his detailed work An Annotated Bibliography of Sir Richard Francis Burton, published in 1923, the British scholar N. M. Penzer presents everything he knows about the famous explorer's prolific writings. His information is primarily designed for book collectors who need to know the differences between editions and their value as art.

Penzer acknowledges seven existing bibliographies but complains about their inconsistencies and failings. In creating his own list of Burton's works, he not only aims to assure the correct title and publication date by viewing the actual copy of the publication when possible (many of them found, at the time, at the Central Library in Kensington, England), but he also describes each book's binding, maps and illustrations, differences between editions, and rarity and typical market price. Books are listed first, ordered chronologically, followed by a separate section for journal articles, also ordered chronologically. 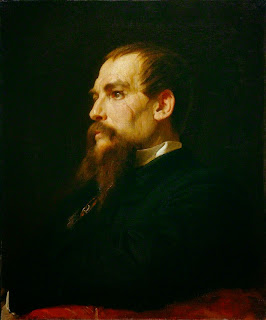 An Englishman, Burton traveled first to India and is best known for his descriptions of Africa and the Middle East, but in the early 1860s he also produced field guides of the western United States and, in the late 1860s, of Brazil and Paraguay.

Penzer's introduction highlights Burton's many gifts. Chiefly known as an explorer, Burton learned twenty-nine languages plus a dozen dialects and was skilled at blending in with local peoples. He traveled with relatively little money in dangerous areas where there were few defenses against disease. He was trained as a soldier, surgeon and lawyer and had a special talent for literature and understanding some aspects of human nature. In calling Burton an "Orientalist," Penzer explains that he had "always been strangely drawn to the East."

Burton lived from 1821 to 1890 and was buried at St. Mary Magdalen's in Mortlake, England. Penzer, born two years after Burton's death, said that Burton's few surviving friends "are, indeed, to be envied, for they have probed beneath the surface and have found the jewel which was but waiting to be seized by those who cared to search." He declared that the memory of him must be "the most cherished possession of their lives."

A preface to the bibliography was written by F. Grenfell Baker, who identified himself as Burton's "daily companion and his travelling medical adviser during the last three and a half years of his superstrenuous and romantic life." When he wrote the preface in Oct. 1922, Baker said he was the last surviving person among those friends who witnessed Burton's death. Baker described Burton as a "unique scholar and doer of great deeds," a meticulous diary-keeper of important information who cared neither for marketing his works nor pandering to opinion, and "the first Explorer, Orientalist, Linguist and Anthropologist of the great Victorian era." He furthermore referred to Penzer as "the foremost living authority on the subject" of Burton's writings.

Some books in the list include Goa, and the Blue Mountains (1851); Falconry in the Valley of the Indus (1852); A Complete System of Bayonet Exercise (1853); A Pilgrimage to El-Medinah and Meccah (1855-6), as he had been initiated into the Kadiri order; and Wit and Wisdom from West Africa, or, a Book of Proverbial Philosophy, Idioms, Enigmas, and Laconisms (1865). He published articles on the Moabite Stones from Syria (1872), today known as the Mesha Stele. His celebrated translation of the Arabian Nights tales, also known as the Thousand Nights and a Night, were produced in the late 1880s.

Penzer reserves special disdain for American reprints of the "Nights" known as the "Burton Club" and "Catch Word" editions because of their haphazardly commissioned illustrations and their poor binding and use of gold. "I sincerely hope these are the last of them, for by this time the electros must be absolutely worn out," he says, referring to electrotyping machines that apply gold.

A particularly significant work was The Perfumed Garden. Penzer writes, "not only did anthropological customs, curious vices, and personal experiences connected with Arabia and the Arabs go into the work, but comparisons and similes were made with those of other Eastern countries, as also with some Western ones, in both classical and modern times, as for example, Babylonia, Egypt, China, and Central America." He believes that Burton subsequently discovered Carter Stent's 1877 essay on Chinese eunuchs and intended to include its information within the existing note on eunuchs in a revised edition of the Perfumed Garden; however, Burton's wife burned the entire revision after his death, along with many other unpublished manuscripts.

A three-essay collection – The Jew, the Gypsy, and El Islam – was published posthumously in 1898, having subtracted mention of alleged Jewish customs of human sacrifice. Penzer's comment that these passages reflected Burton's "knowledge" of the customs suggests that Penzer believed the story. He acknowledges that an anonymous article on the subject of a "law-suit" about the manuscript was published in the journal "Plain English" on April 23, 1921 (The manuscript remains controversial to this day, having drawn approbation from anti-Semites. Christie's put the unexpurgated version up for auction in 2001, but it did not sell.)

Despite the Victorian Englishmen's evident interest in other cultures, occasionally their attitudes toward these cultures are obviously negative. For another example, when Baker, in his preface to the Annotated Bibliography, refers to "the 'literary' view-points of Orientals," he puts the word "literary" in scare-quotes. He says that Burton "blazed the first trail through many and immense jungles of primeval savagedom and 'cultured ignorance,' and pointed the way for later travellers to introduce, foster and establish nobler and wider channels of existence." Needless to say, it is presumptuous to assume that anyone needs to be introduced to an Englishman's "nobler and wider channel of existence."

With so many publications, using different pen names in different countries, Penzer said that "I have practically given up hope of ever completing my list" of Burton's works. Be that as it may, the bibliography he produced is quite useful. Researchers who desire a biography, on the other hand, must look elsewhere. In 1961, the Royal Geographical Society wrote in Penzer's obituary that his "gifts of scholarship were never as fully developed as many thought they might have been and it will always be a matter of regret that he did not write the definitive biography of Burton it was so well within his power to do."