The sad, private journal of 'The Sand Child' 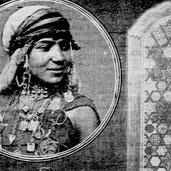 This storyteller character in Tahar Ben Jelloun's lyrical novel The Sand Child narrates most of the protagonist Ahmed's story. Ahmed has led an unusual life and has recently died when the novel begins. He has allegedly left behind a journal containing his private thoughts, many of which bend toward the mystical. The storyteller claims to possess Ahmed's journal but will not share it with anyone, preferring to retell his version of the journal's contents to a crowd gathered in a square in Marrakesh.

While The Sand Child may not quite "illuminate" the reader about any particular subject, it will likely intrigue and dazzle with the beauty of its sad language.

Ahmed's father is a dictatorial man who punishes his family with silence rather than violence. His wife bears him seven daughters, but because he only wants a son, he dismisses them as fatherless and says, "I cannot give them my affection, because I never wanted them." When his wife becomes pregnant for the eighth time, he decides that "the child to be born was to be a male even if it was a girl!" This child is to make his wife "a true mother." The child is indeed born female and, from its first day, according to plan, is raised as a boy called Ahmed, with the birth joyfully announced in the newspaper. "You have at last given me a child," the man tells his wife. Only the child's parents and the midwife know the secret; not even Ahmed's seven sisters know there is anything unusual about their brother.

"There is a truth that cannot be told, not even suggested; it can only be experienced in absolute solitude, surrounded by a natural secrecy that is maintained effortlessly," the storyteller reads from Ahmed's journal. Because Ahmed is thin and not especially masculine in appearance, he preserves his social identity as a man largely by remaining a recluse in his room. Silence and solitude are recurring themes. He avoids mirrors. He is cruel to his mother and sisters, none of whom are given names in the story. "He thought they had no world," the storyteller explains. Ahmed describes himself as feeling simultaneously like the shadow and the light, the master and the guest, the mirror and the reflected gaze.

His brief, celibate marriage to a disabled cousin reinforces his social identity as a man but does not afford him an opportunity to explore his authentic being. He calls her a "sacrificial woman." His family perceives the marriage as cruel – in part because he demands that his wife be isolated in his house – but they consent to it. The poor cousin dies nearly as quickly as she is brought to him.

Increasingly, Ahmed feels the urge to express himself as a woman in body and soul. "To be a man is an illusion, an act of violence that requires no justification," he says. Yet he knows all too well that being a woman in Moroccan society is not easy, either. "Simply to be is a challenge," he concludes.

A modern person might assume that Ahmed's life can be described as questioning or challenging gender norms – what some might see as boldly "transgressive" in the personal-as-political sense – but this is probably the wrong construct to apply to him. After all, Ahmed did not choose to transgress anything. He was given a social role and lived up to it, just as his seven sisters lived up to theirs. It would have required more guts and creativity for him to adopt a feminine identity, as this would have required him to cross his father and mother, shame his family, risk his life, and confront the unknown. He never even had a feminine given name to which he could return; he would have needed an entirely new name.

Within the novel, the people who gather in the market to hear the storyteller's tale about Ahmed habitually interrupt him with their own theories of what happened. Did Ahmed ever explore his identity as a woman named Zahra? Did he die alone in his bedroom? Was his end tragic and violent? The uncertainty builds a kind of hagiography around Ahmed. Most people are curious and sympathetic, while simultaneously disapproving of his secretive, unconventional life. A sort of transcendent, magical quality is superimposed upon the depression and loneliness described in his journal.

The novel was originally written in French. Tahar Ben Jelloun was born in Morocco in 1944 and now lives in France with his family. The novel was first published as L'Enfant de Sable in France in 1985 and was subsequently translated into English. The story is set some time in the mid-twentieth century. It is continued in the sequel, The Sacred Night.

- December 09, 2014
Email ThisBlogThis!Share to TwitterShare to FacebookShare to Pinterest