George W. Bush's memoir on Sept. 11 and the wars in Afghanistan and Iraq

"Decision Points" covers a range of issues that defined the presidency of George W. Bush. These are the memoirs of an American president. This article was originally published to Helium Network on Nov. 15, 2010. Photo: Televised phone conversation from the Oval Office in the White House in Washington, D.C. on Sept. 13, 2001. White House photo by Eric Draper. Public domain. Wikimedia Commons. 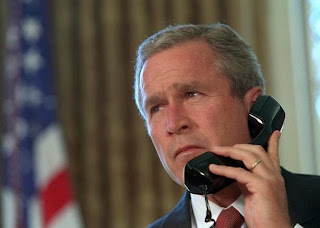 "Decision Points," released in November 2010, is the long-awaited memoir from former U.S. President George W. Bush about his eventful eight years in office. He describes his experience leading the country during the terrorist attacks of Sept. 11, 2001, the subsequent U.S.-led wars in Afghanistan and Iraq, Hurricane Katrina and the financial crisis.

Rather than opening the book with these weighty issues, Bush begins with personal vignettes about the childhood death of his sister Robin, his struggles in school, his decision to quit drinking, his interest in the preacher Billy Graham, his reluctance as a young man to settle down with a career and family, and his intention to adopt children with his wife before she unexpectedly became pregnant with twins. Following the personal introduction, the rest of the book is organized around political issues. There are separate chapters for the wars in Afghanistan and Iraq. Even those stories are not always told in chronological order, but are often framed instead by descriptions of Bush's relationships with other key political figures. The sentence structure and vocabulary is extremely simple; portions of the book could be assigned to a bright sixth-grader.

Part of the drive behind this book may have come from Bush's desire to correct the record when, in April 2004, a journalist asked him to name a mistake he had made and he could not. This memoir is a little more open about some of his shortcomings.

Sept. 11 and the war in Afghanistan

Of the suicide bombings of Sept. 11, 2001 and the U.S. response to them, Bush writes: "The story of that week is the key to understanding my presidency." The event led directly to the war in Afghanistan. Bush asked the ruling Taliban in Afghanistan to cooperate with his investigation into and response to the attacks, but they refused. So, less than a month after the terrorist attacks, Operation Enduring Freedom was launched. "The liberation of Afghanistan had begun," as he puts it. The plan was for the US to join local opposition to "avoid looking like a conqueror or occupier. America would help the Afghan people liberate themselves."

Bush defends the practices of waterboarding of suspected terrorists (an "enhanced interrogation" technique that many described as torture) and wiretapping under the Terrorist Surveillance Program (something else no one wants to happen to them).

Not finding Osama Bin Laden, the man responsible for organizing the Sept. 11, 2001 attacks, was one of Bush's "great regrets." (Bin Laden was killed a few months after the release of Bush's memoirs, under Obama's presidency.) But at least, Bush says, Bin Laden never attacked the US again. That the US did not again suffer any significant international terrorist attack for the remainder of his term is, to his mind, "my most meaningful accomplishment as president."

The war in Iraq

Bush recalls that France, Germany and Russia stood together in refusing to help the US invade Iraq. "I understood why people might disagree on the threat Saddam Hussein posed to the United States," Bush says. "But I didn't see how anyone could deny that liberating Iraq advanced the cause of human rights." The opening "shock and awe" bombing campaign of government buildings began on March 19, 2003, and by that fall, 30 other countries had ground forces in Iraq.

Bush admits that "we had not adequately prepared" for the scenario of Baghdad being taken by looting and violence. Saddam released tens of thousands of criminals from jail prior to the arrival of the U.S. forces, and to make things worse, the Iraqi police "collapsed" and the army "melted away". Later, the American man in charge of post-liberation organization "formally disbanded the Iraqi army, which had largely disappeared on its own," and Bush did not anticipate that these armed men would join the insurgency rather than signing up for the new army. The Sunnis in particular feared they would not have a place in the new Iraq. As a result, Bush wonders whether his de-Baathification program was too severe.

He reveals that the scandal at Abu Ghraib prison in 2004, in which U.S. soldiers photographed themselves abusing Iraqi prisoners, was "a low point of my presidency," but he doesn't elaborate what corrective action needed to be taken.

Of the ultimate discovery that Saddam Hussein had not been hiding the weapons of mass destruction that were the original basis of the invasion, Bush said, "No one was more shocked or angry than I was when we didn't find the weapons. I had a sickening feeling every time I thought about it. I still do." For someone who is shocked and angry, Bush devotes a surprisingly small space in this book to the vindictive outing of CIA operative Valerie Plame after her husband questioned the accuracy of the "16 words" claim in Bush's 2003 State of the Union address: "The British government has learned that Saddam Hussein recently sought significant quantities of uranium from Africa." Bush does not mention the name of former White House press secretary Scott McClellan, whose 2008 tell-all memoir "What Happened" alleges that Bush "deceived" him in asking him to assure the press - inaccurately, in hindsight - that Scooter Libby was not involved in the leak.

After Saddam was captured, he explained that he'd inflated the appearance of his weapons capability as a bluff because he wanted to make a show of strength to Iran and because he did not believe the US would really invade. If Saddam indeed received "mixed signals" about the seriousness of Bush's intent, Bush blames it on the joint statement issued by France, Germany and Russia that they would not participate in the invasion and - rather noncommittally and gratuitously - on "antiwar demonstrators around the world" whose actions "didn't help," whatever that might mean. (One imagines that those critics could have proved very useful indeed, had Bush listened to some of their arguments.).

When Hurricane Katrina hit Louisiana in 2005, the city of New Orleans flooded and was plunged into chaos. Bush says he didn't immediately recognize that local authorities were failing to lead, and he acknowledges that "I took too long to decide" when assuming federal control of the situation in New Orleans. He says he should have appeared on the scene more rapidly and communicated more empathy. "My biggest substantive mistake," he clarifies, "was waiting too long to deploy active-duty troops." Being accused of racism in the response to Katrina was "the worst moment of my presidency."

As Bush neared the end of his presidency, a crisis hit financial markets, severe enough that they "ceased to function," as Bush put it. He says it was unfair to use taxpayer money to fix problems that the banks had caused, but it would have more unfair to do nothing and to let Americans suffer enormous economic problems caused by multiple bank failures. Bush was involved in September 2008 when the government chose to allow Lehman Brothers to fail but purchased most of insurance giant AIG which was $85 billion in debt and put government-sponsored mortgage companies Fannie Mae and Freddie Mac into conservatorship. He supported the Troubled Asset Relief Program to help fix the problem. Additionally, in "Decision Points, he takes both credit and blame for the "bailout" of the automakers that is often pinned on his successor, Barack Obama.

Bush covers many other topics, including:

There are also some curious omissions, such as energy policy, climate change and the popular debate over same-sex marriage.

While Bush doesn't spend much time analyzing Democrats, a pleasing feature is that he doesn't spend much time attacking them, either, and his criticism is muted and civil. It is more bothersome that he gives scant attention to the opinions and experiences of the American population at large. In the book, Americans serve as occasional statistics on education and Medicare and as symbols of the effects of 9/11 and the subsequent wars, but they never appear as experts who provide competing worldviews. Because of that, this hefty book is limited to Bush's own personal narrative, and it doesn't tell the larger story of the country during the Bush administration. It leaves the reader with the impression that Bush didn't accept much advice or insight from anyone outside his inner circle.

Although this book does not contain surprising revelations, it is worthwhile for those who are interested in a story of the eight years of the Bush administration narrated from the perspective of the President.