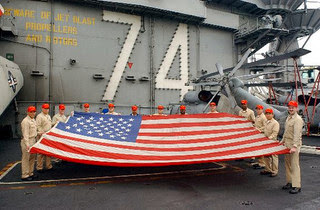 A memoir of the killing of Osama bin Laden was published by Penguin on Sept. 11, 2012, the eleventh anniversary of the terrorist attacks on U.S. soil perpetrated under bin Laden's direction. The publisher describes the book as a "blow-by-blow narrative" that "is an essential piece of modern history." (Read a review posted to Goodreads on Sept. 19, 2012.)

No Easy Day: The Firsthand Account of the Mission that Killed Osama Bin Laden was written by a U.S. Navy SEAL using the pseudonym Mark Owen. Owen was one of 24 men who participated in the raid. Navy SEALs meet strict requirements for physical fitness, mental aptitude, and psychological resilience before entering rigorous training.

Even before his book hit the shelves of bookstores, "Owen" was expected to face legal charges for publishing it. His contract with the Pentagon forbid him to reveal information about the raid. When, on Nov. 5, 2014, the author sued his attorney for $8 million for incorrectly advising that the book did not need to be reviewed by the Department of Defense, he revealed in the lawsuit that the government was demanding a penalty of $4.5 million from the author. The amount represented the current and expected future proceeds of the book.

The author's real name was revealed by Justin Fishel in a controversial story for Fox News on Aug. 23, and his name is now widely known. Within a day of that story, the book soared to the position of the single best-selling book on Amazon, even though the book was still only available for pre-order.

Fishel had previously blogged about Navy SEAL Team 6 following the famous mission. In a post for Fox News shortly after the 2011 killing of bin Laden, Fishel noted that the small team of elite service-members "have expressed concerns about their safety and the safety of their families now that details of the mission have been made public."

Indeed, the US government did not even want the name of the unit to be made public; Obama did not mention it in his address to the nation immediately following the raid.

The government also declined to release photos of bin Laden's corpse, fearing that the risk of sparking violent retaliation outweighed the benefit of assuring the public of the terrorist's demise.

Why did Fishel, who understands the role of privacy in protecting the SEALs' safety, write a story using the memoirist's real name? Perhaps he believed that the memoirist had put his fellow soldiers at risk and therefore was fair game for retaliation. Fishel quoted a SEAL who said, "How do we tell our guys to stay quiet when this guy [Owen] won't?" and a military spokesman who said, "He’s [Owen's] the one who started this so he bears the ultimate responsibility for this.”

Other major news outlets distanced themselves from Fox's stance. Even though the author's real name had already been revealed, NBC News said it would not use the name in its news stories, and CNN expressed a similar position. Both organizations acknowledged that the publisher of No Easy Day had requested that the media not perpetuate the publication of the author's real name.

Unsurprisingly, the revelation of the SEAL's real identity had prompted terrorist websites to publish death threats against him. It seems likely that news organizations that refrain from publishing the man's real name might feel a lessened sense of responsibility for hate speech that uses the man's real name.

Being "outed" to the press is risky for someone who has participated in classified activity. There are numerous examples of this.

In 2003, White House deputy chief of staff Karl Rove told Matt Cooper, a journalist for Time, that former ambassador Joseph Wilson's wife Valerie Plame was an active CIA agent. Days later, Robert Novak published a column in the Washington Post identifying Plame's role. Plame, of course, could no longer serve in the same career once her identity had been made public. It is generally believed that this was done intentionally to punish her husband for publicly disagreeing with one of the White House's positions.

In 2012, another identity disclosure affected a Pakistani man who assisted the US in locating the residence where bin Laden was subsequently killed. A Pakistani tribal court sentenced the man to 33 years in jail on charges of treason.

This article was originally posted to Helium Network on Aug. 27, 2012.

The 2012 film Zero Dark Thirty follows the manhunt of bin Laden. "As an act of myth-making, Zero Dark Thirty is inescapable," Dan Jackson wrote for Thrillist in 2019. "It established the narrative that all future counter-narratives must push back against or attempt to upend."

"The film's dramatic arc," Daniel Klaidman writes, "follows Maya's near-messianic quest to take out 'UBL.' Intense and headstrong, she battles the weary fatalism of her bosses, suppresses all moral doubt about the use of torture to extract leads, and sticks to her theory of the case with feverish conviction. The movie's harrowing, climactic kill operation is Maya's vindication. But then, having identified bin Laden's body in a hangar at Bagram Air Base, she finds herself all alone in a cavernous cargo hold, a thousand-yard stare on her face." ("Will Obama End the War on Terror?" Daniel Klaidman, Newsweek, December 24, 2012, p. 28) "No movie has captured the ethos of the 'we need to kill these people' era better than Zero Dark Thirty." (p. 31)

This American flag was photographed aboard an aircraft carrier on Dec. 7, 2001. San Diego Air and Space Museum Archives. © No known copyright restrictions. Flickr.