‘Memoirs of an Arabian Princess’: A nineteenth-century princess’s home life

Sayyida Salme (1844-1924), Princess of Zanzibar and Oman, grew up in a palace in Zanzibar called Beit Il Mtoni. Unlike most of her family members, she was literate, and, later in life, she wrote her "Memoirs of an Arabian Princess from Zanzibar" in German, having married a German businessman and moved to Hamburg with him. Her story is devoted to her memories of her childhood in Africa and barely mentions her marriage. She particularly focuses on the women's lifestyle because that is what she experienced.

Zanzibar is an island off the east coast of Africa, and the dominant religion was Islam. In her culture, she says, assets were always tangible, as there was no concept of abstract investment, except in “half-cultured States as Turkey, Egypt, and Tunis.” Her father, the Sultan, owned 45 plantations with thousands of slaves. He had one legitimate wife, by whom he had no children, and 75 concubine wives, by whom he had 36 children. 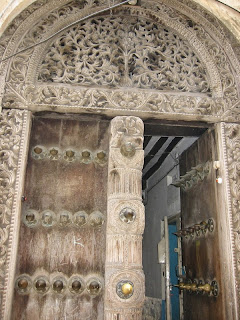 Including the servants, the household of Bet Il Mtoni numbered about a thousand people who lived under rules of formality. Wives dressed in the Arab style, and slaves dressed in the Swahili style. The children were supposed to be fully dressed, including hair ornaments for the girls, whenever in their father’s presence, and they were supposed to speak only Arabic in front of him. (Multiple languages and dialects were spoken privately in the household.) Children ate meals with their father, but wives never did, and at mealtimes the wives segregated themselves by their skin color (Circassian or Abyssinian). Much time was spent in the baths; there, people ate, slept, worked, read and prayed.

Most of the family was superstitious, although the princess personally was not. They frequently held exorcisms for children supposedly possessed by the devil. They once sacrificed a bull to a spirit said to reside at the spring of Tschemschem on the island of Zanzibar. Although they called doctors in cases of extreme illness, they tended to categorize all ailments as either “headache” or “stomachache” and did not quarantine sick people or follow prescribed diets, and they sometimes disregarded the doctor’s requests and advice.

They celebrated two main religious holidays: the “little festival” and the “great festival.” On the little festival, ladies perfumed themselves so strongly that the windows had to be opened, and they laid still for three nights to obtain a henna tint that lasted four weeks, while eunuchs distributed small coins among the poor. The “great festival” was celebrated by sacrificing a bull.

As a young girl, Princess Salme moved to a different, smaller household. This occurred after the death of her mother’s close friend among her fellow concubines, Sara, when Sara’s grown son insisted that the author’s family move in with him into the much smaller Bet Il Watoro. Two eunuchs, including Old Djohar, accompanied their move by ship.

Because most of the residents of these royal households were illiterate, when communicating with relatives in other households, they preferred to recruit slaves to convey verbal messages. Sometimes they would write letters, but in these cases, it was necessary to employ people on both ends to write them and read them, and what was written was often not faithful to the intent of the one sending the message.

Princess Salme’s education was discontinued when she was nine years old. Due to a conflict between women, they moved again to Bet il Tani, where she taught herself secretly to write.

The status of women is addressed within the book. Princess Salme acknowledges that, although Muslim law permitted a man to have up to four legitimate wives (horme singular, harino plural), only a rich man would ever take a second wife, and she was never aware of any man who had more than two. There was no restriction on the number of his concubines (surie singular, sarari plural). When a Persian doctor (hakim) visited a woman, he was allowed to inspect only the affected body part – the rest of the woman’s body being wrapped in a shawl – and to speak only to her father, brothers, or eunuchs.

She emphasizes that, in her culture, a woman was not the “cypher” – or, in a vernacular translation that would ring more familiar to modern ears, the “doormat” – that Europeans rumored her to be. Many women were respected by their husbands. She accords partial credit for the Arab conquest of Zanzibar to her great-aunt, who risked her life by disguising herself in men’s clothes and inspecting military outposts.

When she refers to “slaves,” she seems to exclude the servants called “eunuchs” and to consider slaves as a separate category. Plantation slaves performed physical labor or menial tasks. They were exempt from the Ramadan fast, generally having “no religion at all.” Princess Salme is an apologist for slavery, acknowledging that, while the slave transport was rough and slaves were subjected to corporal punishment, slaves were treated better by Arabs than they were by Westerners, having relatively little work and expecting to be freed after about ten years rather than sold to a new master. She believes that this slavery is a necessary institution, as “the black race cannot be induced to work, but only forced.” (Her mother was Circassian, so she was one of her father’s lighter-skinned children.) She does not refer to any of the slaves by name.

Eunuchs are also omnipresent in her recollections. “The slender and weak eunuchs are likewise on horseback,” she recalls, while “the black slaves, however, are on foot.” It was a eunuch who instructed the five-year-old children to ride horseback at Bet Il Mtoni; at Bet Il Watoro, her riding instructor was a eunuch named Mesrur. The chief eunuch Djohar was allowed into the treasury with her father and helped him assign jewelry gifts to wives and children. The chief eunuch was also responsible for the ceremonial shaving of an infant’s head and for assigning slaves to each concubine. Eunuchs perfumed the rooms with a rare fragrance called oud (agarwood) and sprinkled women, including visiting European women, with attar of roses.

“a detachment of negro guards came first; then a number of young eunuchs headed by the chief eunuchs; behind these my father, followed by his sons, the youngest closing up the column. In front of the entrance to the braze the guards and eunuchs formed into double line, through which my father, with his sons, passed into the chamber. All rose to salute him, and the same order of procession was repeated when he retired from the assembly.”

Her father would verbally settle disputes. If the business was “petty,” it might be decided by the chief eunuch, who also had the authority to declare that lengthy proceedings would have to continue the next day. Such an impressive ceremonial display was also performed when the family gathered in their grand piazza, “the trim and well-armed eunuchs being ranged at some distance in rank and file along the gallery.”

After her father’s death, family life changed forever when there was a rivalry between her brothers: the generous Madjid and his would-be usurper, the cruel Bargasch. She joined a women’s faction that sided with Bargasch. The violent rebellion failed, and many slaves died as a result of her and her sisters’ efforts. Bargasch was banished to British India. Madjid was lenient with the princess and her sisters, but their family relations were forever altered, the family having become permanently factionalized.

Some time later, Princess Salme met a German man who was on business in Zanzibar. She became pregnant and traveled north with him to Aden (in present-day Yemen), where she was baptized as a Christian and married him, changing her name to Emily Ruete. They continued to Hamburg, where she bore three children over the course of three years, until he died in an accident. Years after that, she was able to bring her children to visit her home country of Zanzibar, which is where her story ends. Her memoirs afford a glimpse into a little-understood nineteenth-century culture.