The false eunuch's end of innocence in 'The Northumberland Shepherd'

The Eunuch: Or, the Northumberland Shepherd is a short story published in London in 1752 by an anonymous author. The preface suggests it is a fictionalization of a true story; the author's intent was to expose a moral issue without exposing the actual people involved. The prose is a little rough around the edges but serves the purpose of the "false eunuch" farce well enough. 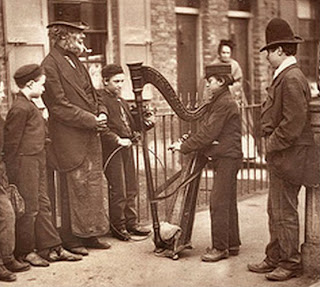 The fictional narrator, Harry Collison, grew up sleeping outdoors in a bucolic environment in Northumberland in England. He was the oldest of five children raised on a diet of bread and water. When some visitors from the nearby castle overheard the fourteen-year-old boy making music, they bought him from his parents for one crown and brought him into their wealthy household. He was primarily entrusted to a thirty-something woman as his music teacher, her husband being frequently absent; they had a daughter about his age and a couple of female servants.

At seventeen, Harry was "thin, and of an effeminate and clear countenance…and called handsome." One night, his mistress—who is never given a name—pretended to be afraid of some noises in the house and crawled into bed with him. "Harry," she said, "you know your father told me at first, how it was with you…such a one as you are, is next of kin to one's own sex…I have nothing to fear, I am sensible of your defects, and pity you." Although he did not understand her words, she was implying that she had always believed him to be a castrato, and that she believed he could not impregnate her.

The next day, she explained to him, stammering all the way around the embarrassing word, that she believed "you was an—such a sort of a—that is—one of those—that—like a keeper of the eastern kings [sic] mistresses—or as—like the Italian singers at the opera, whom you have heard, when you have attended me thither—that is—they call them—eunuchs." She argued that his father was at fault for misleading her, and that, since their affair had already begun, there was no crime in continuing it.

Eventually, she became pregnant. So did her teenage daughter, Dolly. So did their servant, Betty.

Whereas the mistress seemed to have schemed, lied, and manipulated, the servant seemed to be genuinely naïve. Even after having slept with Harry, Betty wondered how she could possibly be pregnant, once again stammering around the forbidden word: "only—because—some people—were not like other people—" Learning too late that he was not a eunuch, she dismissed him as a "base deceiver."

While the master of the house never learned that his wife's child was by their "castrato" slave musician, and while the servant simply left the employ of the house to give birth privately, there was no way to hide the fact of Dolly's pregnancy. The girl lay in bed for months, pretending to have dropsy, but at the end there was a baby. Harry was obviously implicated, and he fled the house to avoid the wrath of Dolly's father, his master. Dolly was sent overseas to stay with a family member.

Harry lodged with a barber (the unstated irony being that barbers during this time period also served as professional castrators of musically talented boys). The barber disguised Harry as an old man, such that he was able to make a living as an itinerant singer under the nickname "Old Daddy."

Returning to the castle, he privately sang his old songs for his mistress so she would recognize. He expressed no remorse for having gotten three women pregnant and showed no curiosity in the offspring. (His mistress's young son, named after him, was presumably in the house, but wasn't mentioned to the reader.) Rather, Harry only wished to blame his mistress for spreading the false story around the household that he was unable to father children.

Harry quickly completed an "honest marriage" with a woman he had just met. She did not know his name until she accepted his marriage proposal; the reader is never told her name. There the story came to an end, with the author's warning: "The man who purchases an house, considers how long it may stand, and rates his price accordingly; but he that purchases only sinful delights, neither knows their continuance, or the price they will cost him."

The reader may find it odd that, of Harry's four love interests, the two with the most significant speaking roles remain nameless. Not only does it seem a bit odd that Harry's real gender status would have remained secret for years, given the eventual importance of this information, but it is nearly incomprehensible that Harry was unaware that everyone in the household believed him to be a eunuch. Harry's callous, teenaged indifference to his conquests is a little off-putting, and the author's intended moral lesson is unclear.

This is a peculiar example of a story sold for a shilling in the mid-eighteenth century, and it is amusing to imagine how people might have read it aloud and acted out the silly dialogue for entertainment.

- December 10, 2014
Email ThisBlogThis!Share to TwitterShare to FacebookShare to Pinterest
Labels: eunuchs in literature, fiction about eunuchs