The character of Abdullah in Ann Chamberlin's 'The Sultan's Daughter'

Ann Chamberlin's historical novel The Sultan's Daughter (1997) has a character, Abdullah, who is a classic example of a eunuch character in fiction. He is self-aware and articulate. This is a good book to read for a presentation of the theme of personal loss as expressed by a fictional eunuch character. 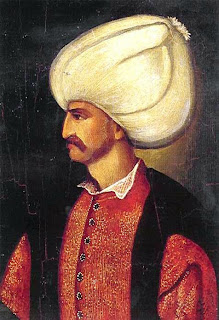 This story takes place in the 1560s during Suleiman's reign. Suleiman's 40-year-old son, Selim, is a drunkard. His grandson, Murad, has taken as a concubine the beautiful Venetian-born Safiye, formerly known as Sofia Baffo. Safiye acquires a eunuch servant of Hungarian origin. She witnesses him being punished by having the soles of his feet whipped (the punishment is carried out by other eunuchs, specifically those who are categorized as racially "black"), and his nose, teeth, and fingers are also broken before she rescues him. She names him Ghazanfer. He speaks "in the laconic, hissing way the lack of teeth and outward masculinity forced him to." (p. 90) Safiye orders him what to say and what to believe (pp. 110, 120)

Murad's sister is Esmikhan Sultan. She is married to Sokolli Pasha, and she has a eunuch servant named Abdullah, who narrates most of the book. He is a young Venetian who was recently castrated in Pera. Abdullah has a relatively egalitarian relationship with Esmikhan. For example, he sits in her presence. (p. 37)

Esmikhan has not been able to bear a surviving child. Of his relationship with her, Abdullah says: "We were two halves suddenly one, the failed single sexes suddenly whole. Or if we were whole the way we were, which her presence often made me feel, together we had double the space in which to stretch our humanity." (p. 170) And he speaks this defense of her: "At least she never thinks me inferior for a loss that is not my fault. She thinks I have gifts to offer, even as I am. Exactly as I am." (p. 186) He suspects that women perceive him as "nothing but a cold, dowdy eunuch who can never have known true attachment" (p. 312), but he is indeed attached to Esmikhan.

Abdullah thinks to himself:

"The real, enduring Esmikhan, I decided, was neither the physical, living body who had bloomed and caught Ferhad's young eyes, nor the thing that hung like a dead weight from Sokolli Pasha's marriage contract. Her essence was something else again, no easier to describe than the nature of a reflection. I remembered the first evening I'd met her, dressed as a bride, and that secret, invisible thing that had passed between us on the road from Kutahiya which has made me say on occasion that we were married, she and I. Being neither male nor female, but having in me the attributes of both, it was I who was most qualified to love the eternal reflection of my lady that was neither living nor dead. Indeed, I believe, when there is true love between mortals of any sex or between man and God, that is the part that is loved.

Eunuchs (khadim, singular; khuddam, plural) in this society may travel between men's space (public space) and women's space (private space). They must ensure that women do not leave the harem unless they are veiled and guarded, and that the veil is maintained in the presence of any male guests who come into the harem. Their role is not merely organizational, but also involves the implementation: They open and close doors, hold up curtains, and carry messages. In rare cases, they are addressed as Ustadh as a greatly respectful honorific. (p. 180) By contrast, being called a "capon" is a great insult. (p. 184)

Eunuchs are often given feminine names. Abdullah's former male name was Veniero, and after his castration, he was originally supposed to be called "Lulu," but he managed to refuse that name and to go by Abdullah instead. (p. 37) Safiye's servant was originally called Hyacinth, but she renamed him Ghazanfer ("bold lion"). (p. 84)

They are said to have a manner of folding their arms across their chest, which seems to represent passivity or patience. (p. 21) Esmikhan says: "I'm afraid it's a khadim's lot in life to be ignored much of the time." (p. 37) They are fed the meat of calves rather than adult cattle. (p. 317) With effort, they may become "immune" to the "infection" of the influence of beautiful women. (p. 22, 57, 334) Abdullah is wary of becoming a "gossipy khadim and a talemonger" (p. 38) and resolves "to refuse the image of the eunuch, the wounded boy in need of mothering..." (p. 180)

Safiye thinks to herself that they are "whiny, shrill, gossipy, silly half-men like so many geese. They were worse than the lay sisters in the convent....That's where all you men keep your brains. One cut takes it all." (p. 56) She complains of being stuck in a place "crawling with dour eunuchs". (p. 320) Abdullah wonders: "Had the ability to feel Christianity been cut from me along with the rest?" (p. 174) When he gains four assistants, he notes that they "typified the worst infamy of eunuchs: the dull, fat, lazy stereotype from which we suffer." (p. 302)

The permanence of a eunuch's condition

This book does not have any castration scenes, but the reader gradually gains small amounts of information about what happened to Abdullah at the house in Pera. The house was dark (p. 21); he was given sweets laced with opium (p. 148); a man named Salah ud-Din had castrated him (p. 291); the severed parts may have been eaten by dogs in the street (p. 202); and his friend, a Syrian merchant named Husayn who was a husband and father, had avenged him by stabbing Salah ud-Din in the heart and then castrating the corpse. (pp. 186, 291) Husayn escaped punishment for committing murder by disguising himself as a Sufi dervish, a belief system he genuinely adopted as his own.

He asks a midwife if his maleness can be restored. She answers no. "By heaven, I was almost relieved to hear it, her sentence of lifeless life. A sort of desperate panic that had been eating at my heart – most would have called it hope – took love's poison and died." [Here, "love's poison" refers to aconite.] The midwife mentions that she could introduce him opium-smoking to assuage his existential problems, but that if the problem is the lack of a penis, she might as well justify a similar habit in herself. (p. 43)

Abdullah has a good amount of self-awareness of his own emotions and of his role in his society, as expressed in these statements:

One cruel cut had put all hope of love forever beyond my grasp.
Esmikhan Sultan owns my body, I reminded myself. But not my heart, not my soul. My still-raw pain told me I would die before I gave those to anyone. (p. 16)

But the manhood left to me was not considered the equal of pirates or shipwreck anymore. I was meant to have no purpose other than the protection of this sanctuary behind the grilles. (p. 19)

It had been so long since anyone had consulted my desires in anything, perhaps that part of me had totally atrophied. Did I even know how to want anymore? (p. 185)

I made my way thus far through acre after acre of nothing but men, carrying no more news than that my lady had bathed this morning and was once more willing, anxious to receive her lord. And these were the manliest of men who smoothed their chest-long moustaches protectively as they watched me pass. They guessed my message. This embarrassed me to the very root of all I was missing. (p. 206)

What else is a eunuch for if not to take his lady's most urgent messages to the outside world? (p. 251)

That a noblewoman's virtue is sometimes set but low on men's scale of values does not erase the fact that it was my whole reason for being." (p. 302)

Abdullah has an ironic awareness. He lacks "manhood in vague generality" yet must guard his mistress against the threat posed by masculine individuals. (p. 19) He thinks about "how overwhelming the task of a eunuch was – to somehow be stronger than men who are real men" (p. 237). His fellow eunuchs – dressed in robes and cone-shaped turbans, and anointed with "very feminine perfumes" – filled their "thick and heavily jeweled fingers" with fattening sweets (honey pastries and sherbets), making it less likely that they would ever do men's work aboard a ship. (p. 20) The springtime reminds him of new life but also of the anniversary of his castration (p. 21) and specifically of "when the pain and shame of my condition had been new upon me and I had been unable to feel anything beyond that." (p. 291) In the presence of a newborn boy, he feels "a bitter sort of awe" at being reminded of his own loss of that which was "only flesh" and also of his ability to make a "miniature self," that is, to reproduce. (p. 217)

Image at the top of the article: A 16th-century painting of Sultan Suleyman I the Magnificent of the Ottoman Empire. GNU General Public License Wikimedia Commons.

- December 06, 2014
Email ThisBlogThis!Share to TwitterShare to FacebookShare to Pinterest