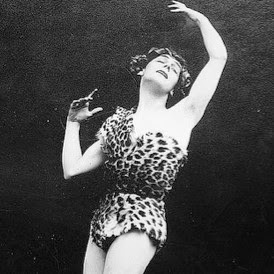 Effects of Castration on Men and Women is a lesser-known work of the early twentieth-century sexologist David O. Cauldwell, M.D., published by Haldeman-Julius in 1947. The 32-page book is written in clipped, direct sentences that rely on fairly simple vocabulary and a very basic medical understanding of glands and hormones, making it accessible to a wide audience.

Cauldwell defined castration as the removal of the testicles or – as became possible as a deliberate act much later in human history – the ovaries.

The discussion of the castration of women is restricted to the third and fourth of ten chapters. He pointed out that abdominal surgery is dangerous, and he complained that some "eugenically minded" surgeons of the time preferred to thus sterilize a woman than to offer other forms of birth control.

Although he lamented that some women are unnecessarily operated upon, his opinion was that, while a man prefers losing "a leg or an eye" to castration, a woman is bothered by castration no more than by losing "the tonsils or the appendix." Furthermore, while a man tends to hide such an affliction, a woman "goes about broadcasting her condition to almost anyone who will listen." No doubt this overstatement contributed toward his overall focus on men.

He found it either important or entertaining to reference the ancient Babylonian myth of the Descent of Ishtar, in which, when the goddess went underground, humans and animals stopped having sex. The other gods decided that Ishtar must be brought back, but they believed that it would be inappropriate to send either a man or a woman, so they castrated a man and sent him to recover the goddess. Cauldwell's opinion is that this myth originated to provide "some reason...for this particular kind of man's inhumanity to man."

The Biblical kings Solomon and David mutilated their enemies. This forcible sexual mutilation was, he opined, less civilized behavior than the scalping practiced by American Indians who were generally deemed by the Europeans to be entirely uncivilized. This kind of racialized appeal has an interesting, if unclear, effect in a work that generally defends the eugenic approach popular in that era.

A castrated male child, Cauldwell wrote, "never actually becomes a man," and though intelligent will be "invariably devoid of the ability to exercise mature judgement in matters of consequence"; he contrasted this with eunuchs who may "have regular coitus" if castrated in adulthood. He complained of the irony that, "like religious celibates, they [eunuchs] often undertake to legislate a pattern or a set of patterns for sexually normal people."

Other famous eunuchs he cited include Potiphar, the servant of the Pharaoh in the Book of Exodus; Domitian's favored boy, Earinus; and Tarses, eighteenth-century general and king of Persia.

He explained that Judge Frank Collier in California had recently set a precedent for offering convicted child molesters the Hobson's choice of lifelong prison or castration; it became popularly known as "Collier's Choice."

Cauldwell (1897-1959) is known as one of the first sexologists to have used the word "transsexual." In this book, he titled the fourth chapter "Desire for Surgical Sex Transmutation: An Insane Fancy of Near Males." This sounds like it tells you everything one needs to know about Cauldwell's opinion about gender nonconformism. Indeed, he goes on to refer to crossdressing men as having a "mental twist" possibly indicating "glandular pathology." He colorfully introduces the topic with this hypothetical: "Should someone tell you that your next door neighbor, a hard-working man by day, discarded his rough work clothing upon reaching home at night, bathed, shaved closely, and donned feminine make-up and finery for his evening's relaxation, you might be both startled and surprised." Some might feel that this slightly sensationalizes the topic. However, if he did not exactly defend the dignity of transsexuals, he at least provided some validation of their feelings and their existence.

Of "inverts," a.k.a. "homosexual" men – which he confused somewhat with transsexual women, who in turn were conflated with people with a Freudian "castration complex" – he was careful to say not that they are guilty of criminal sex acts, but rather that they are "guilty of what the law chooses to call criminal sex acts." After all, some people are "willing to label almost anything connected with sex as criminal." This language that seems too subtle today would have been read as a pointed objection to the criminalization of homosexuality when it was published 56 years before the U.S. Supreme Court ruled that sweeping laws against consensual sex acts known as "sodomy" were unconstitutional.

Cauldwell's opinion was that doctors were in a better position than legislators "to remedy sick minds," and he looked forward to the day when "the leprous hands of thin-brained censors are forever purged from the affairs of mankind." Censors of books, he said, prevent the general public from obtaining information and are "so-called humans who are worse social misfits" than many psychiatric patients.

He indicated that, when he received a letter of inquiry from a gay man who said with respect to his lover "I want to change my sex for him," he told the individual that such surgery was irreversible and occasionally fatal. He advised the man to act on behalf of his own authentic self and not for the sake of what he thought his lover wanted, and he suggested that the man request testosterone or psychiatric medication before seeking surgical sex reassignment. (Testosterone had been isolated and synthesized only a few years earlier; he did caution later in the book that "any attempt at self-treatment with hormone preparations is a foolish waste of money.")

After he published this letter of response – which one might anticipate would be somewhat off-putting to parties interested in sex reassignment – "innumerable requests were received for further information" about "surgical sex transmutation." Evidently, there was an unmet need for information about the topic. It is sobering to think that this book might have been the first meaningful information resource that some people in the 1940s put their hands on – and that, decades earlier, there was even less available to the public.