‘Glory in the task of it’: The life of a fictional eunuch in Iran

Like many other books that feature eunuch characters, "Equal of the Sun" opens with a description of the main character’s castration. The eunuch narrator in this instance recounts his story for a princess, upon her request.

Yet this story differs significantly from other books that employ the same gambit. Equal of the Sun, set in mid-sixteenth-century Iran by novelist Anita Amirrezvani and published in 2012, is one of the deepest and most complex treatments of a eunuch character in modern literature. 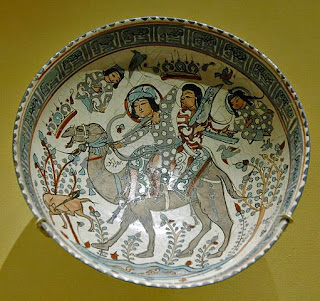 The story is narrated by a young man of noble birth. Distraught that his father has been fingered as a traitor and summarily executed, he promises himself that he will ferret out his father’s persecutor, but to do that, he needs access to the palace. So, at seventeen years of age, he voluntarily submits to castration and applies to the palace as a eunuch servant. He is accepted as the personal servant of the quick-witted Princess Pari, daughter of the Shah, who privately declares the eunuch to be her “chief of information.” He is taken under the wing of other high-ranking eunuchs who give him his palace name, Javaher, meaning “jewel.” His mentor is Balamani, who came from India as a child slave and who is second in command to the chief eunuch Anwar, who came from Africa.

Javaher feels a close bond with his princess, whom he often calls “the lieutenant of my life.” She tells him, “How curious it is that you were sent to me: I would never have expected to feel such kinship with a eunuch.” And he thinks to himself: “I began to feel, when we were alone, that we were not just princess and servant – we were hamrah, companions on the same road.” Smarter than her brothers, the princess wishes to rule alone and thinks of Javaher as her “acting vizier.” She even presents him with a religiously engraved, gilt steel dagger in a leather scabbard as a symbol of their pact.

She reflects on their bond: “My job is to mother my country, not bear children. Yours is the same.” In silent response, Javaher thinks: “How different we were from ordinary men and women!” Reconceiving his personal mission as the “grand and strange” goal of leading the country to a brighter future makes him feel hopeful.

Javaher is selected by the princess in part because he presents a well controlled demeanor at court. However, he is capable of passive aggression. While arguing with Balamani over how they will respond to news of a murder, his nonverbal language reveals his anger indirectly: “I lifted the blanket off my bedroll with so much force that it flew onto the floor.” He is not often molested, presenting himself as a force to be reckoned with.

Not all the eunuchs in the story are described in complimentary terms. Abteen the scribe is “sunken-chested” with “rounded shoulders,” humorless and bored by gifts. Fareed is a messenger who is never assigned to stay long because his botched castration causes him always to smell of urine. A nameless guard lolls in sleep outside the women’s chamber, enabling Javaher to sneak in. Seen in the eunuchs’ private bath, Anwar and his friend look like women with “pendulous breasts and flat pubic areas.”

Javaher, on the other hand, is described as more masculine in appearance because of the relatively late age at which he was castrated. He retains sexual interest in women and manages to have an active sex life (which is described explicitly) despite the complete loss of all of his male organs. At first, while relearning how to urinate, it seems that “the vertigo was so great I feared I would slip into the latrines. Was I male? Female? What was I?” Yet soon he comes to feel that “my freshly healed wound had reinvented my capacity for pleasure.”

Javaher has a strong sense of self. He knows himself “as a man, not just as a eunuch. I was, after all, more than a mutilation, in my own eyes.” He finds inspiration in other eunuchs, including the Chinese eunuch Cai Lun who was said to have invented paper and Alexander’s lover Bagoas who “led the ancient empire of Iran, crushing even mighty Egypt,” whose names he invokes prayerfully. He sympathizes with other eunuchs, as when he throws stones to anonymously wake a guard so he will not be punished for sleeping on the job.

He is ambivalent about his situation. He fears that women will leave him as they graduate to marriages. “Most women crave children, and that was the one thing I could not provide,” he acknowledges. “Yet I was still a man, wasn’t I?” In a nightmare, a woman asks him in bed: “What are you?” Yet he is able to recognize that “something deep within me wanted to sacrifice myself for my father, just as he had given his life for us,” and this sacrifice lends meaning to his life choice and its consequences. When his princess writes a poem celebrating him and his “third sex” nature, he glows: “My birth as a eunuch had finally been recognized and recorded with as much fanfare as the moment a male child enters the world.” Just as he recalls hearing a blind poet who puts great feeling into each word, he finds that “there was glory in being half, not whole, glory in the task of it.”

For Javaher, this mythic “task” is not so much to be physically whole but to live honestly. After separate altercations with two men, Javaher explains to Balamani:

“I may pay the price of my life for my words, but at least I said them. I don’t care that I made an enemy. I don’t care that I may lose my posting. For once, I did not feel as if what was true in my heart as as different from what was on my lips as day to night. I became like hot white light, pure and clean. I felt as if my testicles had grown to the size of mountains and I had earned the right to shout out, 'I am a complete man!'"

In many novels, eunuchs are villains or objects of pity or scorn. Where they are supporting characters, they often have nearly non-speaking roles and are typecast in terms of their job functions rather than being allowed to convey a sense of self and autonomy. Anita Amirrezvani has bucked the trend by depicting a eunuch who is indisputably a full human being. She reveals that she began writing the novel with "six alternating narrators" until, unsurprisingly, Javaher "emerged as the most compelling of the bunch."

Originally posted to Helium Network on May 1, 2013.