An abused boy is a tragic figure in M. A. McRae's novel 'Not a Man'

Shuki, a young eunuch, is repeatedly abused by men in the novel Not a Man. He and his fellow adolescents learn a good deal about sex as they grow up. Originally posted to Helium Network on May 13, 2014.

M. A. McRae's novel Not a Man is a sordid tale of a child sex slave. Written with a good amount of tenderness, the subject matter is nonetheless hard to take, especially with such a great quantity of words and repetitive anecdotes about abuse. 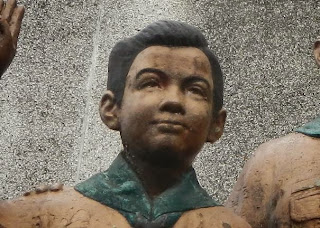 Not a Man is set in the modern world, probably in the mid-20th century, given the references to technology. The story opens in an Arab nation that is never named. Shuki, whose family is impoverished, is a 10-year-old sex slave to a wealthy man named Hassanel Daoud who is of English descent and was raised Arab according to his stepfather's culture. Hassanel often puts the boy in restraints and allows other men to have their way with him. The boy puts up with it because he knows his family needs the money and because he sees "Uncle Hass" as his caretaker.

Hassanel asks Shuki if he will consent to a "small operation" that he likens to a circumcision but does not explain any more fully; he bribes Shuki with the promise of gifts. Shuki is drugged and gagged as a doctor performs an illegal castration on a bed, cutting off his testicles and shortening his penis. Hassanel sentimentally retains the awful mementos of this procedure, and ever after, he takes pride in the idea that Shuki consented to this for him. Shuki, however, knows that he did not consent, and he privately determines to run away at his first available opportunity. Subsequent events are set in England.

The story makes clear that the practice of castrating "bed-boys" used to be fairly common in this culture, but that it became illegal and is now so uncommon that people no longer immediately recognize a eunuch as such when they meet him on the street. It is only when Shuki's nudity is revealed — which he assiduously avoids — that others understand that he was castrated. One man tosses Shuki out of a holy area, telling him that he is an "affront to Allah."

Shuki is taken advantage of by many men throughout the story. Hassanel's sex-mad teenage son, Hasquitri, upon learning that Shuki is a eunuch, appropriates his father's boy toy for his own purposes. A wealthy businessman pays him for sex. His friend makes love to him. Even Shuki's teachers and a doctor to whom he turns for help have inexplicable stirrings for him as soon as they learn that he is a eunuch, and some act impulsively on that attraction. It happens so many times that Shuki believes he can obtain British citizenship by "offer[ing] myself to the Home Secretary in return for what I want."

This seems unrealistic in its thorough creepiness. It feels as though Shuki is surrounded by psychopathic molesters wherever he goes in his native land and also when he travels to stay in England. If this were a true story, it would be a horrid confessional.

The story is repetitive and excessively long, having roughly the same word count as "Harry Potter and the Goblet of Fire", except that, in this case, the golden egg can never be retrieved.

What redeems the book is that Shuki evinces an unstereotypical personality. He often plays along with the perception that eunuchs are biddable while really he is waiting for the right moment to ask for more money and gifts or to run away. He loves horseback riding, and he cares about training himself as a fighter as well as working on his literacy.

Some time after his castration, he tells one of his bed partners that

"it's only recently I've realized what I really lost that day...A man and a woman, together, in a relationship that will probably last until one dies...that sort of love is inevitably based on a sexual relationship. It's not sex that I miss, but what sex can lead to."

It is a mature thing for a young teen to say, but then, he's had plenty of opportunity to contemplate it.

For those who wish to read it

The e-book can be purchased cheaply on Smashwords, a self-publishing platform. Not a Man was released in 2011. The two subsequent books in the Shuki series are The King's Favourite and To Love and To Protect. The Australian author, M. A. McRae, keeps a blog.

The story drags on inexcusably and could have been told in a quarter of the number of pages. As it is, there is no subplot, but just an endless series of rapes and mishaps, with rather limited insight from the teenage characters into their situation. The book is nonetheless a useful reminder of a sort of life that does not exist only in fiction; sex slavery has been a reality for children, castrated or not, throughout history and even today in the underground economy.

- December 06, 2014
Email ThisBlogThis!Share to TwitterShare to FacebookShare to Pinterest
Labels: eunuchs in literature, fiction about eunuchs, m a mcrae, not a man, novels about eunuchs, sex crime