"The Sheen on the Silk" is a novel about intrigues in the Byzantine empire, centering around the main character of a woman posing as a eunuch. Written by Anne Perry and published in 2010, the story opens in late thirteenth-century Constantinople.

Anna Zarides, a widowed physician, travels a hundred miles from her home in Nicea to the city of Constantinople. She intends to learn more about the circumstances of the exile of her twin brother Justinian Lascaris so that she may rescue him. Realizing that she will need to speak with men as well as women, she poses as a eunuch called Anastasius upon her first arrival in Constantinople. This enables her to speak to men on professional pretenses, as a woman physician would not be allowed to treat male patients. It also relieves her of pressure to remarry.

This issue of personal concern happens against a backdrop of the Byzantine empire's decision whether to ally with Rome. The inhabitants of Constantinople have only recently returned to their city after being exiled for a half-century. (The reader knows from history that the two churches will not reconcile and Byzantium will suffer a series of defeats, ultimately falling to Mohammed II the Conqueror in the mid-fifteenth century.) The story explores the psychological concerns of individual characters who believe they stand to benefit or lose from an alliance with Rome.

Disguising herself as a eunuch

Although Anna consistently presents as a eunuch in public and indeed risks death if her deception were to be uncovered, she is referred to as "she" throughout the story.

Anna does not have much difficulty passing physically as a eunuch. Recalling that a woman named Marina once successfully posed as a eunuch in a monastery (this is a probable reference to a fifth-century Lebanese saint), she simply binds her breasts, pads her waist, cuts her hair at her jawline and leaves it unveiled and unadorned. There is no reason for her to expose her body to anyone else. When she sails to Jerusalem, "she insisted on privacy for bodily functions, but as a eunuch that was granted her, even if for quite mistaken reasons. No one wished to embarrass her for the organs they rightly assumed she did not have." She appreciates that traveling alone is generally safer for her when she is perceived as a eunuch compared to when she is perceived as a woman.

Deliberately behaving as a eunuch is more challenging for her. Her eunuch servant Leo, described as "tall, slender-shouldered, and round-faced, with hairless cheeks," accompanies her to Constantinople and she copies his movements so habitually that she even finds herself reaching for food that is distasteful to her. Sometimes she feels the need to "make some uniquely eunuch gesture," yet recognizes that any such attempt would appear "absurd." The deceptively simple solution is for her to behave more or less normally while taking care not to reveal herself as a woman. A eunuch tends to be socially "invisible, like a servant," which in Anna's situation is a benefit, because less affectation is needed if no one is watching anyway.

How eunuchs were perceived

Eunuchs as a category are not clearly defined or understood in this society. This is made apparent by the very title of the book which is a metaphor for the eunuch sex. "The character of eunuchs," Perry writes, "was like the sheen on the silk-fluid, unpredictable. A third gender, male and female, yet neither." Yet elsewhere a eunuch is described as "a womanish creature with a man's name and no gender at all." One might question whether there is a difference between being a "third gender" and "no gender."

The "sheen on the silk" metaphor appears more than once. In one instance, it emphasizes that the character of Anastasius seemed "almost as if there were nothing innate that defined him." Eunuchs are, nevertheless, considered to be their own category. Early in the story, one eunuch is expected to be "pleased to have another of his kind" and a eunuch's voice is said to convey "the strange, altered tone of his gender." The eunuch Bishop Constantine believes that members of his sex tend to have "patience, suppleness of mind and instinctive understanding of emotion." So part of the mysterious sheen on the silk is the question of whether eunuchs are a separate category and whether they have any innate qualities that distinguish them.

Anastasius - who, again, is Anna in eunuch garb - is described as "not a man, but not a woman, either, yet still a passionate and highly intelligent being. He was what she was pretending to be." Anna is unhappy, longing to solve the mystery of her brother's disappearance and lonely for more people who know her secret and who can see her as she really is. "She was incomplete, maybe as much as the eunuch she pretended to be," as Perry puts it. 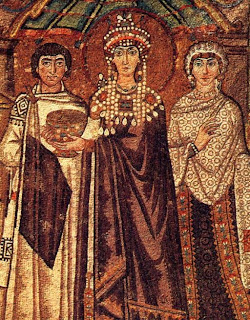 Eunuchs are frequently misunderstood and ridiculed. One man observes that they are "without temptation of the flesh, and therefore without the possibility of true holiness. Is it not better for all that their species die out?" A powerful woman taunts, "What gives you pleasure, Anastasius?," adding, "Do eunuchs have pleasure?" A common response is to fear the unknown, as in this passage: "What an incomprehensible mixture of beauty, wisdom, and barbarity eunuchs were. Rome should fear them more than it did."

They can also be highly ranked and highly trusted. Posing as Anastasius, Anna was allowed to medically treat the bishop and the emperor. Furthermore, when she sent Nicephoras - who was, in this story, one of Emperor Michael's highest-ranking eunuch courtiers - to buy medication for the emperor, Nicephoras brought his personal poison taster with him, suggesting that he was important enough that he had to employ someone to worry about his safety.

Bishop Constantine faces special challenges because he is a eunuch

History leads Bishop Constantine to believe that Constantinople is more tolerant of his gender than Rome would be. He fears that Rome might disenfranchise standing eunuch officials. For that reason, among others, he opposes contemporary suggestions to ally the Orthodox Church with the Roman Church. "The days are gone when a eunuch could be everything except emperor," it is noted.

Emperor Michael Palaeologus, however, desires to unite with Rome. He appoints John Beccus, a "whole man" and a supporter of union, to be church patriarch. Constantine would have aspired to this position and he feels "doubly castrated" by this betrayal. "A whole man, an insult to Constantine's existence. As if organs made the soul!" he rails. "A man was his passions of the heart, his dreams, the things he longed for, the fears he had overcome, the wholeness of his sacrifice, not of his body." Logically, of course, if men are not to be judged by their bodies, a eunuch should not judge an uncastrated man on that basis either. The point is that Constantine believes that the emperor was making a comment slighting his manhood. In his rage, he fantasizes about castrating Beccus and seethes that this would make them "equal."

Constantine is an angry character overall. When he sees the murdered body of a formerly attractive lady, Perry writes that "his mutilation burned in his soul." In this sense, people's bodies - or at least their sense of their own bodies - can indeed impact their spirit and character.

In Anna's case, it is difficult to pin down to what extent her character was determined by her female sex or by her eunuch behavior when she was disguised as Anastasius. So much of her gender presentation was a deliberate ruse, but it did become second nature over time, so one might question to what degree she began to privately feel that she was indeed a member of the eunuch gender.

- December 09, 2014
Email ThisBlogThis!Share to TwitterShare to FacebookShare to Pinterest
Labels: eunuchs in literature, fiction about eunuchs, novels about eunuchs