The Unsullied in 'Game of Thrones'

The Unsullied are an army of eunuchs commanded by Daenerys Targaryen, a woman who seeks to claim the Iron Throne.

Each season of "Game of Thrones" has ten episodes, one hour each. The Unsullied do not appear until Season Three. This post covers their activity through the end of Season Four.

I'm thrilled that this post has received thousands of views, and I wanted to let you all know that in October 2018 I've released a book on fictional eunuch villains. Painting Dragons: What Storytellers Need to Know About Writing Eunuch Villains is available as a Kindle eBook and in paperback.

Daenerys Targaryen, who commands three dragons, is in search of an army so that she can attempt to conquer the Iron Throne. In Astapor, she meets Master Kraznys who is selling 8,000 slave soldiers he calls “the Unsullied”. 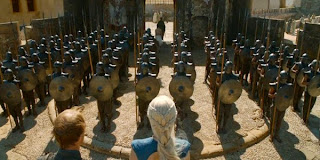 Speaking through a translator, Kraznys explains to her that only one in four boys survives the required weapons training, and that “to win his shield, an Unsullied must go to the slave marts with a silver mark, find a newborn and kill it before its mother’s eyes. This way, my master says, we make certain there is no weakness left in them.” When Daenerys sees them, they have been standing for a day and a night without food or water. Kraznys' translator tells her: “Their discipline and loyalty are absolute. They fear nothing.” When challenged, “Even the bravest men fear death,” the translator responds that "the Unsullied are not men. Death means nothing to them.” To demonstrate this principle, Kraznys bids one soldier step forward. He takes the man's own dagger, cuts through his leather breastplate, and slices off his right nipple. Daenerys begins to speak to stop him, and Kraznys complains in his native tongue, Valyrian, which he believes Daenerys does not understand: “Does the dumb bitch know we’ve cut off their balls?” “This one is pleased to have served you,” the mutilated Unsullied says, stepping back into the ranks.

Daenerys debates buying them. Her confidant tries to persuade her to do it:

"The Unsullied are a means to an end."
"Once I own them, these men..."
"They’re not men. Not anymore."
"Once I own an army of slaves, what will I be?"
"Do you think these slaves will have better lives serving Kraznys and men like him, or serving you?"

Daenerys, strong but with a principled approach to the use of force, is finally persuaded to buy the Unsullied by this argument: “There’s a beast in every man, and it stirs when you put a sword in his hand. But the Unsullied are not men. They do not rape. They do not put cities to the sword unless they’re ordered to do so. If you buy them, the only men they’ll kill are those you want dead.”

She feigns trading her largest dragon for the Unsullied. However, as Master Kraznys learns, dragons are not slaves to be bought or sold, and Daenerys does not believe in human slavery, either. She frees the Unsullied, and they serve her willingly.

In this episode, Daenerys meets Grey Worm, the new leader of the Unsullied. 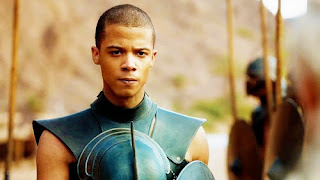 “You did not choose this life. But you are free men now. And free men make their own choices. Have you selected your own leader from amongst your ranks?" [One soldier stands aside.] Daenerys commands him, "Remove your helmet.”
“This one has the honor.”
“What is your name?”
“Grey Worm.”

Someone explains: “All Unsullied boys are given new names when they are cut. Grey Worm, Red Flea, Black Rat. Names that remind them what they are. Vermin.”
Daenerys declares:

“From this day forward, you will choose your own names. You will tell your fellow soldiers to do the same. Throw away your slave name. Choose the name your parents gave you, or any other. A name that gives you pride.”
“‘Grey Worm’ gives me pride. It is a lucky name. The name this one was born with was cursed. That was the name he had when he was taken as a slave. But Grey Worm is the name this one had the day Daenerys Stormborn set him free.”

When Daenerys proposes joining forces with the Second Sons, one of their vulgar captains mocks her: “Show me your cunt. I want to see if it’s worth fighting for.”

Grey Worm, standing there, quickly offers, “My Queen, shall I slice his tongue out for you?”

Daenerys calmly replies: “These men are our guests.”

In this episode, Daario Naharis and Grey Worm – both of whom serve Daenerys – go head to head with a little friendly competition.

Daenerys' army of the Unsullied is standing idle in the sun. Daenerys asks: "Where’s Daario Naharis? Where’s Grey Worm?" She's told they've been "gambling" since midnight. She finds them, sitting on the ground with their arms stretched out, each holding his own sword parallel to the ground. Daario says: "Ser Worm is stronger than he looks. But I can see his arms beginning to shake." He tells her that they are competing for "the honor by riding by your side on the road to Meereen." Daenerys replies: "That honor goes to Ser Jorah and Ser Barristan as neither of them kept me waiting this morning. You two will ride in the rear guard and protect the livestock. The last man holding his sword can find a new queen to fight for."

They immediately drop their swords, and she leaves.

Daario: You like this girl? Must be frustrating.
Grey Worm: You are not a smart man, Daario Naharis.
Daario: I’d rather have no brains and two balls.

At the end of the episode, outside the city of Meereen, Daenerys is verbally challenged by a drunken, vulgar, belligerent man. Missandei translates his tirade for Daenerys: “He says that we’re an army of men without man parts. He claims you are no woman at all, but a man who hides his cock in his own asshole.” Daenerys responds by sending one of her men to duel with the challenger.

Missandei sits by a roaring fire with Grey Worm and gives him language lessons. She teaches him to say: “My name is Grey Worm. I come from the Summer Isles. I am from an Island called Naath.” He speaks haltingly.

“Do you remember your home?” she asks.
“Unsullied. Always Unsullied. Before Unsullied, nothing.”
“That’s not true.”
“Perhaps one day you will return to the Summer Isles.”
“I don’t want return...Kill the masters,” he says, asserting his desire for revenge against those who had made him a slave.

In the next scene, slaves are debating whether to revolt. Grey Worm walks in and tells them, more fluently, in his native language: “All men must die. But I promise you, a single day of freedom is worth more than lifetime in chains.” Upon request, he then introduces himself. "This one," he says, referring to himself,

"is called Grey Worm. I was taken as a baby by the Masters of Astapor, raised and trained as Unsullied. Now I fight for Daenerys, the Mother of Dragons and Breaker of Chains.”
“You are Unsullied? They taught you how to fight before you could walk. We are not soldiers!”
“We have no training, no weapons.”

Grey Worm removes his rucksack. It’s filled with weapons for the slaves' use. He advises: “There are three slaves in this city for every Master. No one can give you your freedom, brothers. If you want it, you must take it.”

Season Four, Episode Six: "The Laws of Gods and Men"

The Unsullied are mentioned in this episode by Varys – himself a eunuch – who reports to the council that Daenerys has used this "powerful army" to conquer Meereen.

Season Four, Episode Eight: "The Mountain and the Viper"

The Unsullied are bathing on the shore of a lake opposite the women, around a bend, where there is some visual privacy. Grey Worm swims to the center and sees Missandei with the other women. She is not wearing clothes. Missandei sees Grey Worm watching her, and she stands, allowing him to look on her nude body.

Missandei privately tells Daenerys what happened. Daenerys replies that the Dothraki aren’t ashamed of nudity, which is not helpful, since Missandei isn’t Dothrakki.

Daenerys shrugs: "Well, I don’t see why it matters. Grey Worm isn’t interested. None of the Unsullied care what’s under our clothes."

The women briefly puzzle over the question of whether the castration of slave boys includes both "the pillar and the stones."

Later, the same day, Grey Worm finds Missandei in the empty throne room. "I have come to apologize," he says. He tells her that the language lessons she gives him are "precious" – a word he has learned not from her, but from Jorah. Missandei tells him that he doesn't have to apologize, and that she wasn't frightened. She asks him if he remembers his birth name or when he was castrated. He says: “I remember nothing. Only Unsullied.” She says, "I'm sorry they did that to you." He replies:

He then repeats his apology and turns to go, but Missandei calls after him: “Grey Worm. I’m glad you saw me.” He replies: "So am I."

Daenerys takes supplicants in her throne room as Grey Worm and Missandei look on. One of the supplicants says that Daenerys’s dragon incinerated his small daughter. In the next scene, Daenerys consults in a private room with Grey Worm and Missandei. Daenerys asks where her dragon is. Grey Worm replies: “Sailors saw him flying over the Black Cliffs three days ago, my Queen. Nothing since then.” She asks for Grey Worm's assistance at the catacombs, where she lures her remaining two dragons, chains them, and seals the entrance.