What can we do with awareness of the world's unfairness? 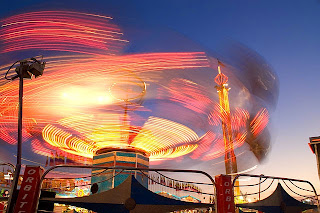 Some say the universe is balanced and has some justice or fairness woven into it, a righting of wrongs in the end. This idea has obvious appeal to those who are suffering. But what can it mean to those who experience joy? Does it mean that their joy will eventually be taken away? Kathleen Dean Moore:

I’m one of the votes for caution, because I go through life slightly unnerved by Ralph Waldo Emerson. I half believe him when he says that Every sweet has its sour; every evil its good. For everything you gain, you lose something. Nature hates a monopoly. This makes sense to me. I think it’s at least plausible that everyone’s life finds its own equilibrium, a natural balance of joy and pain. But if happiness has to come out even with sorrow in the end, then I am in big trouble. I try to take my joy in tiny sips, hoping my sorrow will be equally shallow. But usually I end up swallowing happiness in gluttonous gulps, believing all the while in justice, and so rejoicing at little setbacks and petty unpleasantness, courting small disasters, hoping to eat away at the deficit. I know that if the universe is as reciprocal as Emerson says, I have already had more than my fair share of happiness, and in the end I will have a tremendous, bone-crushing debt to pay.

If the universe is fair in the end, then perhaps this would mean that there is no real evil, since all injuries will somehow be compensated. Many people go about their lives as if they believe this, but upon reflection, it appears obviously untrue. There are many who suffer and are never soothed. Lance Morrow, responding to the sort of Emersonian influence that Moore raised above:

Americans are Emersonians, and Henry James was right when he said of Emerson, "A ripe unconsciousness of evil is the sweetest sign by which we know him."

Once conscious of evil, or at least of unfairness, one may become, as Jennifer Finney Boylan put it, are "angry at the whole brutally unfair world, which distributes its blessings and burdens so unequally."

Confronted with awareness of unfairness, what can we do? If we are well off, it is not because we deserve it in any ultimate sense. Our fortune is mere accident. We might just as easily have been cursed. This is precisely the import of unfairness. To respond to awareness of others' deprivation with glee and possessiveness about our own gains and privileges is to be like a person in a death camp who is smug that today he has not been selected for execution. Primo Levi:

Now everyone is busy scraping the bottom of his bowl with his spoon so as not to waste the last drops of the soup; a confused, metallic clatter, signifying the end of the day. Silence slowly prevails and then, from my bunk on the top row, I see and hear old Kuhn praying aloud, with his beret on his head, swaying backwards and forwards violently. Kuhn is thanking God because he has not been chosen.

Kuhn is out of his senses. Does he not see Beppo the Greek in the bunk next to him, Beppo who is twenty years old and is going to the gas chamber the day after tomorrow and knows it and lies there looking fixedly at the light without saying anything and without even thinking any more? Can Kuhn fail to realize that next time it will be his turn? Does Kuhn not understand that what has happened today is an abomination, which no propitiatory prayer, no pardon, no expiation by the guilty, which nothing at all in the power of man can ever clean again?

If I was God, I would spit at Kuhn's prayer.

But if being pleased with our own temporary deserts is not a sufficient response, what is? Here is one potential lead: Nicolas Berdyaev wrote that "Boehme says that suffering is the source of the creation of things."