Schahabarim's role as a eunuch priest of Tanit in 'Salammbo'

The character Schahabarim is the high priest of Tanit in Gustave Flaubert's historical novel 'Salammbo.'

This article was originally posted to Helium Network on March 26, 2011. 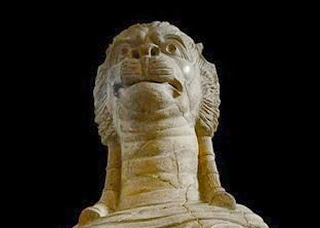 The character Schahabarim is the high priest of Tanit and a eunuch who, although infrequently mentioned, plays an important supporting role in "Salammbo," Gustave Flaubert's fictionalized retelling of the Mercenary War in 241-238 BCE in North Africa. The novel was originally published in French in 1862. Religion is an important motivator for the characters in this novel and Schahabarim is a guardian of many of these spiritual secrets and traditions.

It is possible to tell the story excluding mention of Schahabarim. The main characters include Matho, a Libyan soldier in the Carthaginian army who leads frustrated soldiers in a revolt against their leader Hamilcar, and Salammbo, Hamilcar's beautiful virgin daughter. Matho falls in love with Salammbo at first sight and becomes obsessed with her, feeling love and hate simultaneously and losing all sense of judgment.

As Salammbo is unaware of Matho's existence, he resolves to find her again. Matho and his sidekick Spendius break into the temple looking for the Carthaginian's fabled sacred veil called the "zaimph." In so doing, Matho makes a fatal cultural misunderstanding; it is criminal even to cast one's eyes upon the zaimph. Matho steals the zaimph from the temple and then presents it to Salammbo who is asleep in bed. She is horrified – according to superstition, her life is now at risk – and calls for her servants as Matho escapes. Salammbo, who feels a mixture of attraction and repulsion to Matho, later presents herself in his tent with the intention of either stealing the zaimph back or bargaining her body for it if necessary. Matho begins to seduce or rape her but falls asleep. Salammbo takes the zaimph and upon her return to her father Hamilcar, he betrothes her on the spot to his ally Narr'Havas, a serial rapist on the battlefield who feels only a lukewarm excitement about the opportunity to possess a beautiful woman, and about whom Salammbo likewise feels indifferent.

The Carthaginian army then takes a turn for the worse; starving under siege, soldiers resort to eating each other. In despair, the city's inhabitants turn away from the relatively gentle goddess Tanit (sometimes called the Rabbet, the feminine form of "ruler"); they build a great bonfire and sacrifice dozens of their own children to the bloodthirsty god Baal (also called Moloch). This seems to provide a change of military fortune. The Carthaginians then blame the rebel Matho for all their troubles and decide to execute him by allowing a mob to slowly torture him in the streets on the day of Salammbo's wedding to Narr'Havas. Matho finally falls dead in Salammbo's presence, and a few seconds later, she keels over and dies of no apparent physical cause. The narrator attributes this to her crime of having touched the zaimph in the process of rescuing it from Matho.

While not essential to the plot, the eunuch Schahabarim adds layers of color to the story. He appears infrequently but his actions are always of great significance.

All of the goddess Tanit's priests are eunuchs. They live in the temple's "third enclosure" and ceremonially, they appear in groups, as "pallid men, wearing white robes with red fringes falling right down to their feet. They do not have beards, or hair, or eyebrows; in their hands, sparkling with rings, they carry immense lyres and they were all singing, in shrill voices, a hymn to the divinity of Carthage." They have "black skin." They are "weaker than old women" and understand Salammbo's songs in "an old Canaanite dialect." When the high priest Schahabarim is first distinguished as an individual he is described in this way:

"His deep-set eyes shone like the lamps in a tomb; his long thin body floated in his linen robe, weighted with the little bells which alternated at his heels with lumps of emerald. He had frail limbs, a slanting skull, a pointed chin; his skin looked cold to the touch, and his hollow face, furrowed by deep wrinkles, looked as if it was contracted in some eternal longing, some grief."

He tells Salammbo the secret origins of the cosmos, referring to primordial "monsters without feeling" while he himself appears "more unfeeling than the stones". He is described as having "divinity." He is the one who first mentions and explains the meaning of the zaimph for the reader's benefit. After Matho awakens Salammbo and shows her the zaimph, she is plagued by nightmares, and Schahabarim is her constant solace during this time. When the Carthaginians want to burn Salammbo as a human sacrifice to compensate for the loss of the zaimph, Schahabarim orders her to recover the relic. He goads her on, counsels her to be willing to submit to Matho sexually if necessary, establishes a date that she must set out, and instructs her servant Taanach to beautify her for the journey.

The bulk of details about Schahabarim's background is delivered on several pages in the second half of the book. He was castrated for the worship of Tanit. He recalls "that the high pontiff, years ago, had come forward to the clanging of cymbals to take away his future virility under a dish of boiling water." He once "studied at the college of Mogbeds, at Borsippa, near Babylon," traveled widely, and became the most knowledgeable man in Carthage, coming to believe that the Earth is round and in motion. He is adored personally, as he helped raise Salammbo when she was a child and is now her dearest friend. "She could not live without the relief of his presence," Flaubert wrote. She feels "terror, jealousy, hatred, and a kind of love" for him.

When Salammbo falls ill, Schahabarim believes that Tanit has attacked her, and he unsuccessfully tries to produce a cure by having

"her apartment sprinkled with verbena and maidenhair; every morning she ate mandragora; she slept with her head on a sachet of perfumes blended by the pontiffs; he had even used baaras, a flame-coloured root which drives away evil spirits to the North; finally, turning towards the Pole Star, he murmured three times the mysterious name of Tanit..."

Tanit is an enigmatic goddess whose ways are partially revealed through Schahabarim. When the mercenaries revolt and search the tent of their superior, they find "three images of Tanit, and, in a monkey skin, a black stone which had fallen from the moon." The relic of the black meteorite is a historical reference to the worship of the goddess Cybele whose worshippers castrated themselves and were spreading the practice westward from Mesopotamia during the century in which this story takes place. That Carthage's goddess Tanit might also be served by eunuch priests is therefore not far-fetched from a historical perspective. The black stone, as it appears in this one instance, represents this eunuch cult and the mystery and terror it inspires. Schahabarim is a living representation of and a spokesman for Tanit and her eunuchs.

Although Flaubert suggests that the eunuchs as a group are timid creatures, as when he writes that "Salammbo, used to eunuchs, was lost in wonder at this man's [Matho's] power," Schahabarim knows he has non-physical sources of power. He explains that the gods, the "hermaphrodite Baals," reveal themselves only to castrated priests because eunuchs are "men in spirit, women in weakness." (Later there is reference to a different sort of eunuch priest, the Kedeschim, who are said to have "painted eyelids, symbolizing the hermaphrodite nature of their Deity, and, perfumed and robed like the women, these eunuchs resembled them despite their flat chests and narrower hips."

Schahabarim is empowered insofar as he has his own man-servant who is "used for dangerous missions" and who he sends to accompany Salammbo in her quest to retrieve the zaimph. During a period of anxiety, while the rest of Tanit's priests remain in their "third enclosure" habitation in the temple, only Schahabarim leaves to visit Salammbo. By this time, the strict fatherly figure has lost all tenderness and simply appears monstrous. "By some inconceivable inconsistency," Flaubert writes, "he could not forgive the young girl for following his orders – Schahabarim had guessed all – and obsession with this idea fitted the jealousy caused by his impotence. He accused her of being the cause of the war." Schahabarim's anger and irrationality develop into a kind of weakness that undermines Carthage.

During a desperate period when the Carthaginian mob has forgotten the goddess Tanit and her eunuch priests, Schahabarim appears to them in a white robe and opens

"one of the doors in the trellisses intended for those who were to go in and offer victims. This, thought the priests of Moloch, was an outrage he had come to perpetrate against their god; with sweeping gestures they tried to repulse him. Fed on sacrificial meats, dressed in purple like kings and wearing triple tiaras, they spat on this pale eunuch worn out by fasting, and angry laughs shook their black bears, spread over their chests like the rays of the sun."

Schahabarim, however, makes a reverential gesture toward the statue of Baal, which is an "apostasy" against the relatively benign goddess Tanit.

"One could feel the last bond snapping which linked mens' souls to a merciful divinity. But Schahabarim, because of his mutilation, could not take part in the worship of Baal...the priest, henceforth without a god, disappeared into the crowd, which drew away at his approach."

In the last scene, Matho has just submitted to execution by torture. "Except for his eyes his appearance was no longer human; he was just a long shape, completely red from top to bottom...He fell over backwards and did not stir." Schahabarim, now dressed like the priests of Moloch and carrying their typical sacrificial carving knife, approaches Matho's "corpse," carves out his still-beating heart, lifts it on the "golden spatula" and presents it as an offering to the sun. Only after this awful sacrifice does a divine force strike Salammbo dead. Although the last line of the book claims that her death is her punishment for having violated the sanctity of the zaimph, one might argue that her death also serves as a punishment for her father figure Schahabarim who has renounced the goddess. The reader has witnessed Schahabarim's evolution from a stereotypical "jealous" and "unfeeling" eunuch who nevertheless dotes on his female ward to an apostate man-slayer who pledges himself to a bloodthirsty god and will henceforth no longer benefit from the mitigating influence of a gentle girl.

[Quotations are from Gustave Flaubert's "Salammbo," translated into English by A. J. Krailsheimer.]