The movie Life of Pi is faithful to Yann Martel's award-winning novel of the same name.  Fans have had to wait since the book's 2001 publication for a film adaptation, finally released in 2012, about a boy trapped in a lifeboat with a tiger after their menagerie-bearing cargo ship sinks in the Pacific Ocean.  The human-tiger interaction was made possible by CGI technology and is available with and without 3-D.  The animal looks quite real, and actor Suraj Sharma is inspiring in his role as the persistently God-directed boy who must tame the tiger.  The story is told as a flashback as the adult narrator relives his experiences.  (Would-be filmgoers prone to seasickness might want to stay home on dry land.) 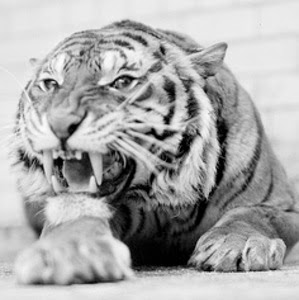 Before the shipwreck, the boy's father warns him not to anthropomorphize the zoo tiger.  "When you look into his eyes, you're seeing your own emotions reflected back at you – nothing else," the rationalist father maintains.  The viewers are thus reminded of the need to struggle with their own assumptions about the tiger's behavior throughout the movie.  This adds depth to the viewers' likely experience of being unable to look away from the tiger's gaze during the riveting journey.

Some of the book's more memorable elements were left out, probably because they would have been too disturbing for a popular audience.  The book's raw depiction of starvation is merely suggested by a brief view of a skin-and-bones animated tiger.  The period of hallucination also feels abbreviated compared to what was in the book, but that is probably a good thing.  Likely for the sake of the PG rating, gone are the excruciating details about bowel movements as a consequence of surviving on raw fish and being confined to a small boat.  Also likely for purposes of keeping the film appropriate and comprehensible to children, a failed rescue attempt with gruesome results was entirely omitted, as was the narrator's temporary blindness due to the ravages of exposure.  (Were it a different kind of film, it might have been interesting to attempt to depict the narrator's blindness as he floated alone on a sparkling ocean he couldn't see.)

So, although purists may quibble over how the movie differs from the book, the adaptation was done well, and every moment of the movie is entertaining.  Its entertainment value, in fact, is an essential part of its purpose and message.

At the conclusion of the movie, investigators are skeptical of the rescued boy's story and demand from him "a story we can all believe."  "A story without things you've never seen before," the boy clarifies.  "That's right," the investigators agree.  The intimation is that many people will only believe what they already know how to believe.  The movie challenges this practical approach, highlighting instead the value of what entertains and inspires people, if they will only suspend their disbelief.

The proposition that the story will "make you believe in God," which is more subtle in the novel, is heavy-handed in the movie.  This lofty promise could make the film popular with a religious audience.

The story does indeed embody an argument for God, but it's not an overriding, knock-down argument.  The events involving the tiger in the lifeboat are shown at length.  A briefly offered competing narrative – provided verbally, not visually – is that the boy was in a lifeboat with some human survivors until they killed each other, and then he was alone, with no tiger.  The provided conclusion is that, because the hero was stranded on a lifeboat with no other human being, he is the only person who can provide a narrative about what happened during that time, and since it makes no difference in the end what really happened, the best criterion for judgment is what makes the best story.

This raises the question of what makes one story "better" than another.  Is it simply the story that is more entertaining?  It cannot be so; the entertainment value of a theistic narrative would be a poor basis for deciding the factual matter of whether God exists.

According to Betsy Sharkey in the Los Angeles Times, "so magical and mystical is this parable, it's as if the filmmaker has the philosopher's stone." Philosophically, this is only a version of the ontological argument, in which God is deemed to exist because he is defined as existing:  QED.

The philosophical principle of Ockham's Razor says that, if two explanations are equally good, one should gravitate toward the simpler narrative that makes fewer assumptions.  The principle one might call Martel's Tiger is in direct competition:  the grander the assumption, the better the story, which is the option that should be embraced.  In this way, the film opens up – but does not directly address – meaningful questions about the role of story in religious narratives.

After being treated to two hours of stunning animation, the viewer must acknowledge that the drama that illustrates courage, hope, and amazement and features charismatic animals is indeed a "better story" than a short, depressing sketch of a shipwreck bringing out the worst in human nature.  This does not, however, mean that the viewer must agree that God exists.  Thus Nick Schager's review in the Dallas Observer rightly referred to film's ending as its "nadir".

There is a third story option:  many would say that the tiger story is improved after it is interpreted it as an allegory in which the animals represent humans.  So might it be with God.  If one finds that stories with supernatural elements are more entertaining, educational, and ultimately redemptive when they are understood as allegories, then, according to the law of Martel's Tiger, God could be best understood as a useful fiction.

As this third option is not made explicit in the movie, it will probably not be a major part of most discussions about the movie.  Some viewers will no doubt manage the pabulous, incorrect take-away message that God must exist because the boy could not have survived his ordeal without God's help, as this is more consistent with the way God is discussed in American culture.

"God, I give myself to you," the hero says, floating in calm sea water that is at last ethereal and luminous, barely separated from the sky ringed by endless clouds, a Renaissance heaven.  "I am your vessel.  Whatever comes, I want to know.  Show me."

If some viewers find that moment more annoying than transformative, more arresting will be the Hinduism-inspired vision of the entire universe inside the god Vishnu's mouth, when all the boy's visible world consists of a bioluminescent ocean and a tiger's jaws.  The movie has something for everyone brave enough to watch it.

Image: Tiger at the Dublin Zoo, 1936. From the collection of the National Library of Ireland. © No known copyright restrictions. Flickr.