Ahausarus is a supporting character in Steven Saylor's mystery "Roman Blood." The story is set in 80 B.C.E. in Rome. Ahausarus is a servant of Caecilia Metella.

Steven Saylor's novel "Roman Blood" is a murder mystery set in Rome in 80 B.C.E. The story is narrated in the first person by Gordianus the Finder, who is hired as a detective by the accused murderer's defense lawyer Cicero. Cicero wishes to find out who the real murderer is in advance of the trial. Cicero's slave boy Tiro, who is explicitly rendered as a non-eunuch, accompanies them. The novel does, nonetheless, have one eunuch as a supporting character.

The eunuch Ahausarus: A 'scatterbrained' servant

When Gordianus, Cicero and Tiro come to the house of Caecilia Metella, they encounter an unexpected situation. The eunuch Ahausarus is introduced as follows:

"The announcer arrived, obviously disappointed to find that it was Cicero and not some groveling client from whom he might extort a few denarii before allowing further admission to the house. From small signs – his high voice, the visible enlargement of his breasts – I realized he was a eunuch. While in the East they are an indispensable and ancient part of the social fabric, the unsexed remain a rarity in Rome and are looked on with great distaste. Cicero had said that Caecilia was a follower of Oriental cults, but to keep a eunuch in her household struck me as a truly bizarre affectation."

This comment – that Ahausarus's presence is a "bizarre affectation" on the part of Caecilia – immediately paints Ahausarus as a sort of Eastern relic, a stereotype, not as a unique person and certainly not one with autonomy. His presence is rather a comment on Caecilia's autonomy. 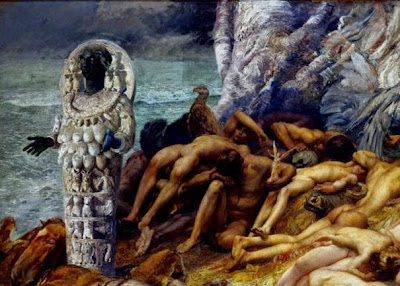 The trio are escorted into Caecilia's inner sanctum, heavy with the fragrance of burning sandalwood and myrrh, where she keeps an eight-foot-tall statue of a goddess. The statue's torso included representations of severed testicles, and the goddess held a bloodstained blade. Caecilia is extremely unhappy with the arrival of the three males into this particular room. Men are forbidden to pass beyond the curtain. "No, no!" she cries. "That stupid eunuch!...How could he have made such a stupid mistake?...I don't see how he could make the same mistake twice. Do you think he does it on purpose?...But Ahausarus is far too valuable to be gotten rid of, and too delicate to punish. If only he weren't so scatterbrained." Although Saylor does not explicitly state it, Caecilia likely finds Ahausarus useful insofar as, given his status as a eunuch, he is able to perform certain functions that are restricted to men, yet he is also able to join her in the sanctuary of the castrating goddess.

Cicero's client, the accused murderer Sextus Roscius, is staying in a different part of Caecilia's enormous house. Ahausarus appears multiple times in the story only within the context of his usual job function as a greeter and escort within the property. Gordianus narrates:

"The eunuch Ahausarus led us there through a network of increasingly narrow and less resplendent hallways...Ahausarus made a show of admitting us with a flourish through a final curtain. 'Sextus Roscius, the son of Sextus Roscius,' he said, bowing his head toward the figure who sat in the center of the room, 'a much-esteemed client of my mistress. I bring visitors,' he said, making a vaguely dismissive gesture in our direction. 'The young Messalla, and Cicero, the advocate, whom you have met before. And another called Gordianus.' [The slave] Tiro he ignored, of course, as he also ignored the woman who sat sewing cross-legged on the floor in one corner, and the two girls who knelt beneath the skylight playing some sort of game. Ahausarus withdrew."

Ahausarus is rarely called simply by his name, unless someone is addressing him directly. The narrator – who had been so surprised to see a eunuch in the first place – more commonly refers to him as "the eunuch Ahausarus," as in these sentences: "Caecilia, in fact, was unable to join us; the eunuch Ahausarus explained that the interview with Sextus Roscius had exhausted her." And: "Finally a slit opened and through it peered the calculating eyes of the eunuch Ahausarus."

The eunuch's officious personality, complete with arched eyebrows and rolled eyes, is revealed in this passage:

"Ahausarus refused to wake his mistress. Nor would he allow us to stay the night. ("Impossible," he sniffed haughtily, as if hosting Sextus Roscius and his family were taint enough on the household.)...After some hurried negotiations (mostly I begged while the eunuch arched his eyebrows and stared at the ceiling), Ahausarus was quite happy to see us off..."

His last task in the book is to clean up incriminating evidence, as ordered by his mistress Caecilia.

Ahausarus is a typical example of the way that many eunuch characters are presented in fiction: silly, with an overinflated view of his role, yet able to be bribed. He is also a typical example of a slave stereotype, as he does whatever he is told but often makes goofy errors, and the reader doesn't get to learn his private thoughts and thus has no idea whether he errs on purpose as a form of rebellion.

About the image above: Diana of Ephesus and the Slaves was painted between 1895 and 1899 by Giulio Aristide Sartorio (1860-1932). Location: Galleria Nazionale d'Arte Moderna. © public domain. Wikimedia Commons.