Waltenegus Dargie's novel "The Eunuch and the King's Daughter" is set in 19th-century Ethiopia. A princess wants to run away. She seeks the collusion of her eunuch guard. Originally posted to Helium Network on Oct. 13, 2012.

In Waltenegus Dargie's story The Eunuch and the King's Daughter (2005), set in the fictional kingdom of Méthi in 19th-century southwestern Ethiopia, the only child of King Badar's second wife, Mersabel, is unhappy. She is tutored by Temari, a Christian, who is fixated on destroying the sacred oak where the local people sacrifice to their gods. He attempts to teach the princess to recite the story of St. George and the Dragon (a story of one of Ethiopia's most popular saints who was said to have saved a maiden from a dragon). Mersabel's mother privately suggests that she would do well to marry Temari, but Mersabel finds the idea repulsive, and anyway has her eye on another man.

This novel does not depend too much on the suspense of what will happen next, but more so on the meaning of the characters' social roles and their choices. The king is embroiled in battles, his second wife is an angry person, the princess is bored, the prince is beheaded, and all their slaves are subject to their whims. The beautiful princess is always required to be accompanied by a guard and is never permitted to venture beyond the sacred oak. The eunuch Head Guard is Marebath, son of Maliwa, and he is ultimately responsible for the princess's welfare and is subject to punishment if any ill befalls her. The story is about the characters' awakening to what they need to do to save themselves.

The story turns on the odd arrival of Ferenj, a big, red-bearded, middle-aged Englishman who speaks the Ethiopians' Amharic language. A man tries to give Ferenj to the king of Méthi in exchange for 100 eunuch slaves, but the king ends up giving him only 30 eunuchs. He cannot manage more, having previously tried to motivate his slave soldiers to fight well in the battles against the king of Gimira by promising them that he would not castrate them, and he intends to keep his word to them; therefore, he cannot make more eunuchs, and may only barter with the eunuch slaves already in his household. The slave-dealer insists on eunuchs because he intends to sell them to Muslim nations that do not permit the act of castration to occur within their borders.

After the departure of the slave-dealer, the king learns that the high-priced Ferenj is not a riflemaker, as he was told, but merely a poet and historian. Ferenj is now put into a position where he competes with Temari, the other literature tutor in the king's household. They have a lot to talk about, as they are both interested in literature and religion, but Temari perceives Ferenj as a rival.

While deciding what to do with Ferenj, the king orders the eunuch Marebath to add the protection of Ferenj to his duties. One night, the king's second wife orders Marebath to kill Ferenj, but Marebath refuses, saying that he will obey the king before he obeys the king's wife. She calls him a "wicked, stiff-necked eunuch" and orders the bystanders to disarm him, but no one does.

The climax of the book builds as the princess Mersabel forms the idea of escaping from the king's household. Ferenj wishes to return to his wife and children in England, and Marebath has nothing to gain from his continued employment.

Marebath only becomes a significant character in the final quarter of the book, so one might ask why is the book is called "The Eunuch and the King's Daughter." Why not "The Red-Bearded English Poet and the King's Daughter"? I suggest that, although Mersabel likes the foreigner Ferenj who has opened her mind to the joy of literature, nevertheless it is with her countryman Marebath that she has a spontaneous moral awakening. She comes to see him as a loyal sufferer and to appreciate his service while simultaneously she reaches a better self-appraisal of her own assumptions and the limitations of her own experience. This explains why the book is named for their friendship. 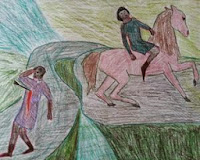 The story's final paroxysm of violence is reminiscent of Gustave Flaubert's Salammbo, a story set in ancient North Africa. That story followed the daughter of a military leader and her devoted eunuch Schahabarim. In The Eunuch and the King's Daughter, as in Salammbo, the eunuch is always on the periphery of the narrative, yet is a significant character who carries the final scene.

The novel's message is character-driven. Imagining the characters' various perspectives, the reader can try to understand their needs and their actions. It will be appreciated by people who would like a narrative from this time period in Ethiopia.

The novel was revised and republished as Princess Mersabel (2021). I also read that version, and you can read my thoughts on it in the publication Books Are Our Superpower.