US: Deepwater Horizon leaked 4.9 million barrels of oil into Gulf of Mexico 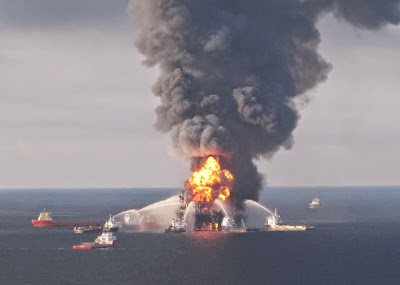 The BP/Transocean oil rig "Deepwater Horizon" caused a leak on the sea floor while drilling for oil in 2010. Oil gushed into the Gulf of Mexico for months.

On April 20, 2010, a rig called the Deepwater Horizon suffered an explosion while drilling for oil off the coast of Louisiana. Oil began leaking from the ocean floor, a mile beneath the water's surface, deeper than any human worker could travel to examine or fix it, and the flow was not completely stopped for nearly three months. At the end of 2010, the U.S. government's final estimate of the total spill size was 4.9 million barrels (over 200 million gallons), or an average of roughly 60,000 barrels per day over the course of the leak.

The size of the spill is relevant both in terms of its environmental impact and in the amount of fines the responsible company BP would owe to the U.S. government. Under the Clean Water Act, BP could be fined $1,100 per barrel and up to $4,300 per barrel if the company is found negligent, entailing tens of billions of dollars in fines, far outstripping the worth of the lost oil itself. (BP also paid over $10 billion to halt and clean up the spill and created a $20 billion fund called the Gulf Coast Claims Facility to settle hundreds of thousands of claims from affected individuals and small businesses.) In early 2011, BP was arguing the government should significantly reduce its estimate of the spill size.

In the short term, immediately after the explosion, estimates of the spill size also affected rational decisions about how to organize the cleanup response, as well as more visceral responses such as panic among the local population, public perception of BP, and satisfaction with the local, state, and federal government responses. Therefore, the U.S. government immediately began speculating about the magnitude of a possible leak, although the leak had not yet been confirmed to exist. Rates were typically reported in "barrels per day" or "b/d," where a barrel is 42 gallons (just shy of 159 liters).

The actual leak was detected four days after the explosion. Oil was leaking from the base of a mile-high "riser" pipe that connected the well on the ocean floor to the rig on the ocean surface. Although the leak could be seen on camera, its size remained difficult to calculate.

A confidential document from the U.S. National Oceanic and Atmospheric Administration (NOAA) dated April 28 expressed fear that deterioration of the riser pipe due to sand particles forced through at high pressure could cause the recently discovered leak to grow by an order of magnitude. That is, assuming a leak of 5,000 b/d, the leak could grow to 50,000 b/d.

On May 1, SkyTruth published an analysis by Florida State University oceanographer Ian R. MacDonald who placed the flow rate at a minimum of 26,500 b/d based on aerial imaging of the oil that had risen to the surface. The estimate was a minimum because he did not try to account for oil that evaporated, sank or mixed with water or that was recovered by workers.

After a closed-door meeting on May 4 with the three oil companies involved in the accident, Rep. Edward Markey (D-MA), chair of the House Energy and Environment Subcommittee, warned the press that the leak could increase to 60,000 b/d. "It's pretty clear that there was not proper preparation for the worst-case scenario," he said. The New York Times reported federal officials acknowledged that an unchecked flow could be over 100,000 b/d. Ira Leifer, a marine scientist serving on the government's Flow Rate Technical Group to estimate the spill size, said on June 7 he'd seen "nothing inconsistent with BP's worst case scenario" of 100,000 b/d. This impressively large, round number was "rediscovered" by the press on June 20. BP responded by saying the flow was unlikely to reach that point as long as the 450-ton blowout preventer remained atop the well. Although the blowout preventer had failed in its purpose of preventing a leak, by its sheer size it was partially plugging the leak, and BP said they had no plans to remove it until the flow was completely stopped.

On May 13, Steve Werely, a researcher at Purdue University, analyzed the visible particles in video of the underwater leak and told the press he believed the well was leaking 70,000 barrels per day. BP immediately publicly disputed this amount, pointing out that three-quarters of the apparent volume was methane gas. On June 9, Wereley, by then on the flow rate study team assembled by the Coast Guard and headed by the U.S. Geological Survey director, told the AP that 19,000 to 43,000 b/d would be a "reasonable conclusion." On May 27, scientists from the U.S. Geological Survey released estimates of the leak at 12,000-19,000 b/d, and possibly as high as 25,000 b/d, concurring with BP that what was leaking was mostly methane gas by volume.

With the release of ten-day-old data suggesting the total spill was between a quarter-million and a half-million barrels and still climbing, government scientists declared the spill to be the largest in U.S. history. The Exxon Valdez, the largest spill until that point, had leaked a quarter-million barrels into Alaska's Prince William Sound in 1989.

One difficulty in measuring the spill size was that much of the oil remains underwater. On May 16, Samantha Joye, a professor at the University of Georgia, said the underwater plumes of oil are too many to count. One was measured at 10 miles long and 3 miles wide. On June 4, researchers at the University of South Florida also confirmed the existence of plumes, of unknown lengths and up to 6 miles wide. BP Managing Director Bob Dudley argued:

"The science of the plumes hanging in the water doesn't feel right. What happens is dispersant [i.e., chemicals deliberately applied to disperse the oil] breaks the drops down into small drops, and they move around and break down."

Using robots on the ocean floor, BP cut through the twisted riser pipe to be able to fit a cap snugly over it, knowing that this could increase the flow of oil from the pipe but hoping to be able to capture most of that oil with the cap. After the pipe was cut, everyone agreed that the flow had increased - but by how much? Only by 4 to 5 percent, according to Marcia McNutt, director of the U.S. Geological Survey and chair of the National Incident Command's Flow Rate Technical Group. This increase was on top of a volume estimated, after BP's release of high-definition video upon Congressional demand, to have been 20,000-40,000 b/d. Or perhaps by 20 percent, according to Coast Guard Adm. Thad Allen on June 8. Or by "multiple factors" according to Ira Leifer.

Resolution of the oil leak

On June 10, BP said that its cap on the well was successfully capturing and funneling about 16,000 b/d. The total leak, then, had to have been at least that size. On June 15, the Deepwater Horizon Incident Joint Information Center - including Marcia McNutt, Secretary of Energy Steven Chu, and Secretary of the Interior Ken Salazar - issued a revised estimate of the leak between 35,000-60,000 b/d.

In mid-June, BP used remote-controlled submarines to deploy pressure sensors on the well to measure the flow, and the expanded containment system began capturing and burning oil at its peak capacity of over 1 million gallons per day (about 24,000 b/d). The government estimate of the leak was increased to 1.5 million to 2.5 million gallons per day, meaning that significantly more oil was leaking than BP was managing to capture and burn. Final government estimates resembled the higher end of this estimate. The leak was declared completely plugged on July 15.

There are various scientific methods for estimating the rate of an oil leak, all of which carry uncertainties. No one will ever know exactly how much oil was released into the ocean. It is important, however, to settle upon a rough number. This number is useful for scientists and others who work in ecological restoration; those who work in natural resource industries such as fishing; and for judges, lawyers and politicians determining BP's legal responsibilities.