The complexities of altruism

An article on Vox.com cited recent research that suggests that "extreme altruism" and "extreme psychopathy" are two polar ends of the same spectrum. Among people who risk their own lives to help others, an area of their brain called the right amygdala is usually above average in size and has increased activity. The amygdala is associated with the ability to feel emotion. This may explain why people who take extreme actions to help others will say that they act quickly without spending time calculating what to do. Psychopaths, on the other hand – that is, those who are immoral or amoral, and who manipulate or injure others for self-serving purposes – have less active amygdalas. They have a more limited emotional repertoire and are known as being more calculating.

Most altruism is not extreme. Where on the spectrum, by the way, would the "ice bucket challenge" fall? Last summer, the popular phenomenon involved people publicly daring their friends over social media to dump a pail of ice water over their head and post the video online. A charitable donation of $100 was usually part of the dare. Most of the money went to research for the degenerative disease ALS; a staggering $115 million was raised for that cause. Everyone, it seemed, was dumping ice on themselves. 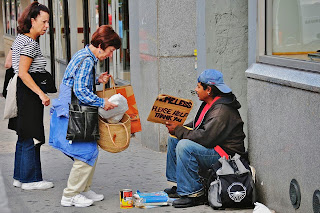 This highlights the fact that altruism is a very strange thing. People give money for reasons that fundraisers cannot always anticipate, though they would love to be able to. A recent New York Times Magazine article collected some observations. First of all, people often derive some kind of pleasure or satisfaction from giving to charity. Their giving is often self-interested to some degree. Other times, they give more purely out of compassion, and many people are aware that their feelings of empathy and guilt are at risk of being exploited, so they may "self-bind" by avoiding solicitations in the first place. They may also simply not want to expose themselves to solicitations that may force them to think about others' suffering simply because such thoughts are unpleasant or come at an inconvenient time. The "ice bucket challenge" did not evoke any image of the degenerative disease for which it was fundraising. Instead, it appealed to the forces of peer pressure and the narcissistic urge to post videos online. Additionally, it tapped into a quirk of human psychology: a law according to which feeling a measure of pain prompts us to confer more meaning or value upon an action. One can say that people gave for the wrong reasons – but they gave.

Sometimes charity that is given after prolonged, careful thought about "the right thing to do" – to help others who are less fortunate – does not achieve the desired effect. An article in The New Republic about international development aid pointed out that any action taken will have side effects, and we are bad at predicting these side effects. These side effects may be good or bad, and in some cases, they undermine the original purpose of the project. Giving charity to a community may result in that community's taking less interest in solving the problem themselves (since it is being solved for them) and failing to maintain physical and institutional structures (since people tend to value less what they do not pay for) or even to have the knowledge about how to maintain them. Addressing one issue, even a large one, may reveal it to be a symptom of another intractable issue. Charitable work remains "the right thing to do" – or, at least, the right reason to take some action. What action is best on practical grounds is often difficult to know.

"The science of extreme altruism: why people risk their lives to save strangers." Joseph Stromberg. Vox.com. Oct. 15, 2014.