How cocaine alters beliefs and feelings

Cocaine is a drug that is illegal in most countries. It delivers a powerful high that lasts only a few minutes. The person usually feels driven to take more of the drug in increasing amount and frequency. The addiction can have devastating effects on their behavior and physical health. Given the cost to the individual, what causes the brain to demand more cocaine?

The brain finds cocaine extremely rewarding. Perception of rewards is heavily influenced by the mesolimbic dopamine system, headquartered in the upper brain stem. Cocaine prompts the brain to send dopamine to the nucleus accumbens, a region at the base of the brain. This feels pleasurable, but the effect soon wears off, generating the desire for more cocaine.

With respect to neuroscience, addictions to cocaine and gambling work off the same pattern. “In other words, if we watch how people's brains respond, promising them monetary rewards and giving them cocaine, nicotine, or amphetamines look disturbingly similar,” writes Dan Pink in Drive: The Surprising Truth About What Motivates Us.

Via the thalamus, the nucleus accumbens connects to the orbitofrontal cortex. The orbitofrontal cortex is an important part of the brain. The surgery popularly known as “lobotomy” intentionally damages this part, resulting in an extreme lack of motivation to the point of incapacitation. (In the mid-twentieth century, tens of thousands of lobotomies were performed in the U.S. and Europe, but this is no longer considered acceptable standard treatment for mental illness.) Brain imaging of a healthy orbitofrontal cortex reveals how the area activates as part of pleasure-seeking. It is stimulated by pleasures like cocaine and chocolate.

In 2001, the Boston Globe quoted neuroscientist Hans Breiter as saying of fMRI images: "We cannot distinguish any difference between the brain pattern of someone while gambling or ingesting cocaine.” Robert A. Burton puts it metaphorically it in On Being Certain: “Winning at gambling turns the orbito-frontal cortex into pure neon.” The same holds for cocaine.

This extreme brain activity, while pleasurable, is not healthy in the long term because it interferes with the brain’s normal functioning. For example, the orbitofrontal cortex plays a role in decision-making. Cocaine users, even after a month of abstinence from the drug, display impairments in their orbitofrontal cortex, which may be part of the reason why they do not easily make the choice to permanently quit the drug; given the drug’s effect on their brains, it would be harder for them to make well-reasoned choices about anything. Cocaine users are also inclined toward risky sexual activity.

In Addiction: A Disorder of Choice, Gene M. Heyman explains that psychoactive drugs disrupt communication between neurons by influencing how they handle neurotransmitters. In particular, cocaine’s enhancement of dopamine activity may affect a person’s “movement and motivation,” since those are regulated by dopamine.

The increased dopamine generated by cocaine use may make people more likely to see patterns where there are none and to become superstitious. The inclination to superstition is mentioned in Joyce H. Lowinson’s textbook Substance Abuse. This phenomenon may be better documented as it relates to gambling addiction.

Jonah Lehrer writes in How We Decide that “slot machine” addicts, due to increased dopamine, will continue trying to find the pattern in the slot machine’s behavior (which of course isn’t there). People who inject dopamine agonists to treat Parkinson’s disease – as Nassim Nicholas Taleb explains in The Black Swan – are more likely to believe that they have found a pattern. They are likely to get sucked in by superstitions, and roughly one in ten will develop a gambling addiction. The lesson is that increased dopamine “appears to lower skepticism and result in greater vulnerability to pattern detection” and “lowers one's suspension of belief,” Taleb writes. Some of these patients feel certain that they see patterns in numbers that are, in reality, random. Additionally, cocaine use can promote the false sense of “supernatural experiences,” according to Bruce M. Hood’s book The Science of Superstition.

Cocaine addiction is sometimes treated using a U.S. Food and Drug Administration-approved drug called naltrexone. When people take naltrexone and cocaine at the same time, the cocaine does not give them the expected “high” because the naltrexone has disabled their capacity for this kind of pleasure. It does this by binding to the brain receptors to which opioids, the brain’s feel-good chemicals, would otherwise bind. Naltrexone is also effective at treating alcoholism.

Cocaine use has severe effects on the brain. It alters the user’s capacity for pleasure, motivation, and decision-making, and it may increase superstitious thinking. In the United States, people can find local treatment options through a government-sponsored database. 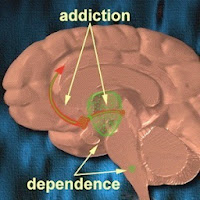