Why the U.S. government was right to conceal photos of Osama bin Laden’s death

Photos of bin Laden's death are classified as "top secret" by the U.S. government. A federal appeals court has allowed them to remain so. 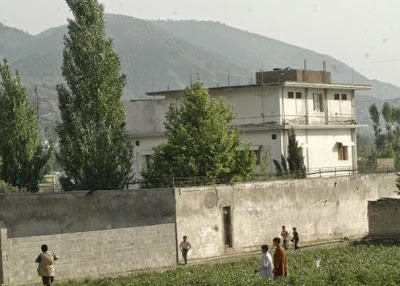 Photo:
Osama bin Laden lived with his family in this compound in Abbottabad, Pakistan. He was killed in the home in 2011. Image by: Sajjad al Qureshi © Creative Commons Attribution-Share Alike 2.0 Generic license. Wikimedia Commons.

Shortly after Osama bin Laden was killed at his fortified home in Pakistan by U.S. forces in May 2011, he was buried at sea. This was done to treat the corpse as respectfully as possible in accordance with Muslim custom while avoiding creating a gravesite that might become a "shrine" to the deceased terrorist and would require constant military security. By the time his death was announced on television, the body had already been disposed of. Although President Obama telephoned Pakistan's President Zardari to inform him of the completed operation (according to AAJ News Pakistan Ki Awaz, which reminded readers that tens of thousands of Pakistani civilians had been killed by terrorists in the previous several years), and although some officials such as Secretary of State Hillary Clinton watched a 38-minute video of the raid, the White House declined to release so much as a photograph of the final result of the operation.

Some Americans questioned that media decision. After all, the U.S. had invaded Afghanistan almost ten years previously with the hope of catching or killing bin Laden and it had started to seem like a mission that would never be accomplished. For some people, a photograph would make it seem more real. Understanding that the lengthy video might contain sensitive national security secrets, why couldn't at least a photo be released?

Iran's Defence Minister Ahmad Vahidi was quoted as saying on May 4 that “The United States forced 10 years of war on three countries (Iraq, Afghanistan and Pakistan), left a million people dead and spent more than 1,000 billion dollars to kill one person...[then they] said they threw his body in the sea. Why did they not allowed an independent expert to examine the body to say if it was bin Laden or not?" (Spelled as such in the article in AAJ News Pakistan Ki Awaz.)

There was no doubt expressed by the White House that they had killed the right man. President Barack Obama said in a "60 Minutes" interview that "we are absolutely certain this was him. We've done DNA sampling and testing." But, he explained, "it is important for us to make sure that very graphic photos of somebody who was shot in the head are not floating around as an incitement to additional violence...we don't trot out this stuff as trophies." He added that "there's no doubt among al Qaeda members that he is dead." Separately, White House press secretary Jay Carney said it would not be wise to let the photos "become icons to rally opinion against the United States." On May 13, the head of U.S. special forces ordered that anyone who possessed photos should turn them into the CIA or destroy them. This email did not become public until 2014.

A report in November 2012 confirmed that bin Laden did indeed receive basic Muslim funeral rites, including washing the body and reciting some Arabic, before he was buried at sea. It was not witnessed by many people, and deliberately, little documentary evidence was made.

The conservative legal group Judicial Watch argued in federal appeals court in January 2013 that the 52 photographs of bin Laden's corpse should be released under the Freedom of Information Act. On May 21 of that year, the court ruled in the government's favor. The photos are allowed to remain classified as "top secret" and do not have to be released to the public.

The case for withholding the photos

There are two main reasons for withholding the photos: first, their release would antagonize bin Laden's supporters who might launch new attacks, and second, it could seem like a crass celebration of death. On the other side, there are two main reasons for publicizing them: first, a photo would provide irrefutable evidence of bin Laden's death, and second, it would provide some measure of satisfaction to people whom he injured.

There are undoubtedly some radicals in the Middle East who will seize any perceived religious or military affront by the United States as an occasion for violent demonstration. Witness the fallout after a certain maverick American Christian pastor announced he had burned a copy of the Koran in Florida; an angry mob attacked a U.N. building in Afghanistan in retaliation for the pastor's actions, killing dozens of people. News of the death of the leader of al Qaeda could easily spur similar damaging mob violence or organized terrorist attacks. By advertising photographs of the exploit, the United States would be baiting militants.

Besides, many people argue that for Americans to view the photograph of the dead terrorist would smack of a kind of celebration. They feel intuitively that it is crass to celebrate anyone's killing - even a mass murderer who was a lifelong leader of other mass murderers, a man for whose death there were solid moral and practical reasons. It is one thing to dispatch bin Laden and another matter to gloat about it. Some people feel that, as a general rule, we are coarsened culturally when we celebrate the killing of any human being and that this negative spiritual effect cannot be completely eliminated even when the feted corpse is that of Osama bin Laden.

Isn't a photo necessary to prove to the world that bin Laden is dead? No. Those who are not convinced by news reports will not easily be convinced by a photograph either. Those who suspect the government of inventing the narrative of bin Laden's death are exactly the same people who will suspect the government of faking a photograph of his corpse. The people who have provided photos are the ones who are faking it; a hoax photo of bin Laden's corpse was picked up by newspapers in several countries, including Pakistan, in the days after his death.

Many other events have photographic evidence yet are roundly denied. NASA's moon landing in 1969, for example, was photographed yet even today some people claim the photos were faked. Scientific explanations for why the U.S. flag waved in the absence of air, why no stars are visible, and why there is no landing crater have failed to impress these skeptics. A photo of Elvis Presley lying in his coffin was published in the National Enquirer in 1977, but neither has this stopped his ardent fans from believing he still walks the earth to this very day.

As a different sort of example, after a high-profile trial, the 1962 execution of the Nazi Adolph Eichmann was shielded from the public eye, yet there was never any significant group of conspiracy theorists who believed he was set free. So the absence of visual images need not generate skepticism; neither will the presence of these images necessarily cure it.

Incidentally, the body may have been in poor condition and the face might not be recognizable to people without expertise in forensics. "No Easy Day," an unauthorized narrative of the killing written by a Navy SEAL who participated, said that bin Laden was shot in the head, causing part of his skull to collapse. A photo might generate more questions than answers for those who lack the knowledge base or the reasoning skills to interpret it correctly.

Not all skepticism is productive

Some kinds of skepticism are irrational, and it is not necessarily in the national interest to entertain that sort of pseudo-intellectual activity. Consider that when bin Laden was killed, the debate about Obama's birth certificate was fresh in the president's mind. During the 2008 presidential campaign, in response to allegations that he was not born in the United States, Obama revealed an image of his "short-form" birth certificate. For years afterward, detractors claimed it was a digitally altered fake and demanded to see his "long-form" certificate. Seeing that the conspiracy theory showed no signs of losing steam, Obama finally released the long-form certificate just days before bin Laden was killed. Yet again, conspiracy theorists insisted that the certificate was forged.

So, if a quarter of Americans believe that the President wasn't born in the United States and significant numbers believe that he forged his own birth certificate, and if, when the President indulged their demands for more documentation, they continued to disbelieve and harangue him, then why would the President indulge them yet again, less than a week later, when many of these same people demanded photos of a military operation? Why should he not expect that they would also make baseless claims that the photos from Pakistan were forged? There is no satisfying some people. To engage with unreasonable demands on this level would likely only result in negative publicity for the President and create an international embarrassment out of what ought to be seen as a clear military victory.

Would a photograph of Osama bin Laden's body do anything positive for the nation or the world? Maybe. It might provide emotional closure to those who were physically or psychologically scarred by terrorist attacks or who lost loved ones in these attacks. It might be an appropriate gift to service members of the international coalition who volunteered in the U.S.-led invasion of Afghanistan and who sacrificed a great deal for the sake of finding bin Laden and bringing an end to his terrorism. It might provide satisfaction to ordinary people who have been frustrated by passively watching years of seemingly fruitless military campaigns overseas and who may feel that, because bin Laden's assassination was funded by their tax dollars, they have a right to see the evidence of his death. It might send a warning to bin Laden's affiliates and admirers.

Then again, it might not accomplish these feel-good results. If anyone actually did see a photo of bin Laden's corpse, they might not feel any of these things. Individuals react differently and sometimes people cannot even predict how they themselves will feel. A photo might not give victims closure for their old wounds, veterans repayment for their service, taxpayers titillation for their dollar, nor terrorists tremors in their boots. It might, instead only give children nightmares and add to a roster of traumatically violent images available for our consumption today. Therefore, caution is warranted.

Two years after bin Laden's death, the hype surrounding the images has declined, but the federal appeals court has allowed the U.S. government to continue to conceal them. It is possible that eventually, at some far-off point in the future, when bin Laden's death seems more like a historic footnote than a current event, the government will release some photos. For the time being, however, especially because these images feed into a dangerous narrative that is used by terrorist organizations, the government's decision to conceal them is reasonable.