The following passage in an 18th-century magazine of prurient interest shows how castrati were perceived in England. The universalized "Signior Castrati" is portrayed as vain, "frequently viewing" himself in a mirror. He is "deprived of the grand essence of manhood" and is an "apology for a man," yet, as a singer, he is "almost deified" by his women admirers. Furthermore, as a sexless "piece of neutrality," he appeals sexually to both men and women, the latter especially because he cannot cause them to fall pregnant.

That, said Dick Ton, (as we were sipping our coffee at the Prince of Orange) who just came in the room, is Signior Castrati, who, you will observe, frequently viewing his pretty smock face features in a pocket glass. He is one of those mortals, who is deprived of the grand essence of manhood, in order to qualify him for the amusement of the delicate and polite part of mankind in the vocal way. He is descended from obscure parents in Italy; being bred to music, the chief study and pursuit of the inhabitants of that part of the world, he came over to England to try his talents, where having succeeded to his utmost wishes, he cuts what may be called a fine figure. He has made the tour of Great Britain and Ireland, and such is the depravity of the reigning taste, that this apology for a man, through the charm of sound, has as many admirers, as the first actors; and particularly among the female world, by which he has been almost deified.

You may wonder, as you please, at his universal reception among the ladies, as his excellency in one point, cannot make up for his deficiency in another; but you will wonder more when I inform you, that this piece of neutrality, neither male nor female, has charmed into the married state a very fine woman with a considerable fortune. These mutilated fellows are objects of choice to some wanton lascivious persons, because they are adapted to gratify the inordinate craving of those rank beldams, as they can keep the field in one regular series, and never decline the encounter ‘till they have the word of command. They are also extremely convenient for those precise ladies, of such extraordinary mock modesty, who are mightily concerned for their virtuous reputation, as they can indulge their little wanton sallies, without running the danger of any disagreeable consequence.

The above is the entire text of the article “A Character.” The Rambler's Magazine (London), February 1784, p. 74. Available to read for free on Google Play. 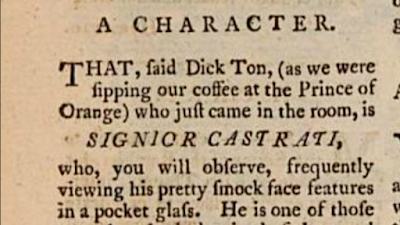