Young people joining a violent group in a search for meaning 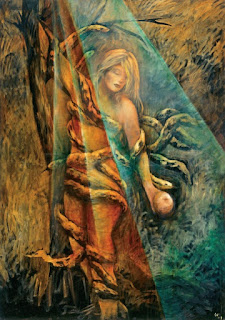 Data from the Centers for Disease Control and Prevention – as described by Emily Esfahani Smith in 2013 – shows that forty percent of Americans "either do not think their lives have a clear sense of purpose or are neutral about whether their lives have purpose." The government agency knows that a sense of purpose contributes to mental and physical welfare. Indeed, as Smith notes, in Holocaust survivor Viktor Frankl's 1946 book Man's Search for Meaning, Frankl said that a sense of meaning in one's life enabled many to survive. In a forthcoming study by Roy Baumeister in the Journal of Positive Psychology, Smith said, "participants reported deriving meaning from giving a part of themselves away to others and making a sacrifice on behalf of the overall group." Furthermore, while happiness was found in the present moment, meaning was found in thinking about the past and the future. Thus, meaning is about transcendence, both of "the self" and "the present moment".

Paul Brandeis Raushenbush, reading analyses of the ISIS cult phenomenon such as that by Prof. John Esposito ("The Challenges of Defeating ISIS"), noted "the continued use of the word 'meaning,' and how a lack of a sense of meaning and purpose in life, coupled with the experience of alienation within one's society, has led to many young (mostly) men, to turn towards such deadly violence." He said that the long-term solution to violent religious movements is that everyone to be

"invested in reaching out to young people. We have to be available to listen to their concerns, empathize with their sense of alienation, and help them find constructive ways to engage societal injustice. It is all of our responsibility to empower this generation with the knowledge and support they need to find a meaningful life and a positive identity that they can embrace and be proud of.

ISIS and other radical groups are deadly serious about reaching out to young people with their skewed version of meaning that leads to death and destruction. Are we just as serious in reaching out to offer meaning that results in affirming life and creating a better world?"

It's not just boys, Lee Smith wrote, in an article that began:

"Teenage girls are the West’s center of gravity: Virtually all of Western pop culture, the key to our soft power, is tailored to the tastes of teenage girls....Indeed, Western civilization is a success largely insofar as it has made the world a safe place for teenage girls—to go to school, get a job, and decide who and when to marry, or if they want to marry. When teenage girls turn away from One Direction and embrace ISIS, it means the West is losing."

He cited a recently released Washington Institute for Near East Policy poll showing that Middle Easterners (e.g. Egyptians, Saudis, Lebanese) tended to have negative opinions of the Islamic State, whereas opinions were more favorable in the U.K. and in France, especially among people of college age. "Thousands of young European Muslims have already left the continent for the Middle East," he wrote, "to help the organization’s leader, Abu Bakr al-Baghdadi, build an authentic Islamic caliphate. Doubtless thousands more are on their way, to kill and die for an idea they believe in." Despite the Islamic State's ideals and practices being "exceedingly stupid and vicious," for these foreign fighters, "the idea of a caliphate, ripped from the pages of Muslim history, resonates with a kind of existential authenticity missing from the vast and drab European suburbs warehousing Muslim youth."

Furthermore, "many hundreds" of European women "have gone to Syria and Iraq to marry Islamic State fighters," because, in his analysis, "the West seems weak and unmanly and they pine for real men who are willing to kill and die for what they believe in." Europe has social and commercial prowess yet, he says, "has become incapable of endowing the lives of its citizens, Muslim or not, with meaning" and "is devoid of values worth living – or dying – for." In particular, he says, Europe and the United States behave in embarrassing ways when confronting Middle Eastern powers, sometimes appearing to "roll over and take it," suggesting that "we don’t really believe there’s anything worth fighting for."

For similar reasons, Robert Zaretsky and David Mikics criticized the Western use of the term "nihilist" to describe the Islamic State.

“'Nihilist' is almost precisely the wrong way to describe groups like ISIS. Not only does it fail to define the group’s worldview, but from their perspective, no word better defines the world of Western, enlightened, and liberal values – in a word, our world – than does 'nihilist.'”

The idea of nihilism – and the proper "just and considered" nonviolent response to it – was originally developed in the West, where it has been engaged by philosophers "for the past century and a half."

Nihilism was understood as "the conviction that no conviction – religious, metaphysical, or moral – was possible" and that the absence of religious guarantees means that we should focus on taking responsibility for our actions. Still, the human tendency is to "tend to cling to traditional beliefs for the comfort they offer" even though modernity has discredited many religious arguments and even though "existential religious thinkers like Soren Kierkegaard and Karl Barth have argued that any faith worthy of the name must co-exist with doubt and disillusion." The task is "to feel discomfited by and not indifferent to this abyss," the awareness that "that knowledge is elusive and truth nonexistent." It should spur us to action. We must recognize "that human nature and human knowledge are imperfect: We cannot win the war against injustice, but only achieve provisional victories."

By contrast, Zaretsky and Mikics explain, ISIS offers a "thrilling new belief system" that "recoils from such an encounter with doubt." For them, violence is an acceptable means to an idealistic end. So, it is inaccurate to label ISIS fighters as nihilists and to imply that the West should be in a philosophical war against nihilism.

"Nihilism is not the enemy – this is not a war of meaning versus meaninglessness – but, instead, it is a description of the human condition. Our real enemies are those who, afraid of this prospect, seize on brutality as a means to religious or ideological ends; our real friends are those who, recognizing this possibility, are willing to work together toward human solidarity and dignity on our shared earth."

“ISIS and the Crisis of Meaning.” Paul Brandeis Raushenbush. The Huffington Post. 8/28/2014.

"Why the Teenage Girls of Europe Are Joining ISIS: Because they want the same things that teenage boys want: a strong sense of meaning and purpose." Lee Smith. Tablet Magazine. October 22, 2014.

Is ISIS an army of nihilists? Just the opposite: How politicians’ favorite word for the jihadist group obscures what’s really at stake." Robert Zaretsky and David Mikics. Boston Globe, Aug. 31, 2014.

Image: "Tree of Knowledge of Good and Evil" by Lidia Kozenitzky, available from http://commons.wikimedia.org/wiki/User:Effib