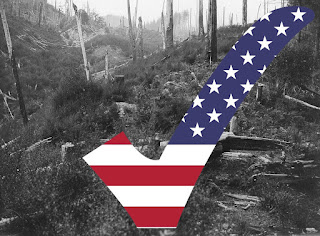 President George W. Bush told the nation in his 2003 State of the Union that Iraq tried to buy yellowcake uranium from Niger. Months after the U.S. invasion of Iraq, when no weapons stockpiles had been found, the head of the Iraq Survey Group testified that it "turns out we were all wrong." President Bush had to admit this in Summer 2003, and he used the line "we were all wrong" in his memoir, Decision Points, in 2010 after he’d left office and while the war was still ongoing.

Americans, then and now, rationalized the national error by compounding it, insisting on an additional mistaken belief that Iraq somehow contributed to the Sept. 11, 2001 terrorist attacks. A majority of Americans believed it at the time, and even today in 2018 the narrative still has traction.

In reality: None of the hijackers were Iraqi. Deputy Secretary of Defense Paul Wolfowitz “was not able to justify his belief that Iraq was behind 9/11” but had the idea of “using” outrage over the terrorist attack “to deal with the Iraq problem,” as the 9/11 Commission cited the memory of Secretary of State Colin Powell. In September 2003, Secretary of Defense Donald Rumsfeld said he’d “not seen any indication” and President Bush said “we have no evidence” of Saddam’s involvement in that plot.

The extremely regrettable takeaway is that the US can start, and maintain, a decade-long, trillion-dollar war that was originally based on wrong information. I don't think the US as a nation ever fully internalized the great shame of this error. Maybe in intelligence circles, but not in the public consciousness.

Truth — our access to hear it, our ability to grasp it, our acceptance of what it means to ourselves and others, our willingness to pass it on — is something we should all care about. It should be a universal value. We need it for science, for journalism, for making the most of the lives we are given. We need it for multilingual, interracial, and interfaith understanding.

Our reactions to error — our own personal errors and those of our nations — do, however, differ. The way in which I feel embarrassment or shame about mistakes, and the way in which I recover from and correct problems, carries for me a bit of religious feeling if anything still does for me these days. Acknowledging fallibility feels tied to reverence, at least in my personal constitution. For me, the wow feeling that some call "spiritual" often means: Look how much we don’t understand. Look what we still have to learn.

I feel the shame of colossal error in my bones, and so I ask: What have we collectively learned about how to speak truthfully about weapons inspections over the last fifteen years since the invasion of Iraq? To judge by this week’s results — the abandonment of the Iran nuclear deal, an impressive and deeply serious work of diplomacy — we have learned less than nothing.

Major diplomatic agreements are intended to endure through multiple administrations. They are not designed to be exited when a newly elected leader finds them inconvenient. Pulling out of the 2015 Iran nuclear deal, as the U.S. president did yesterday, weakens the nation’s credibility in making long-term deals with any country going forward. Iranian President Hassan Rouhani declared that the US “doesn't respect international agreements” and “has officially undermined its commitment to an international treaty”; he intends to renegotiate the deal with the other signatories (the UK, France, Germany, the European Union, Russia, and China). The US has simply isolated itself.

The deal had provided assurance that Iran would be unable to begin developing a nuclear weapon for at least the ten years’ duration of the agreement. If the deal collapses, there is no assurance that Iran will not begin developing a bomb immediately. Today, the US has no leverage within the tatters of the 2015 deal and no credibility with which to secure a new deal in the future. So much for the real estate mogul who was elected to the U.S. presidency touting his dealmaking skills.

The claim by the U.S. president today that Iran isn’t complying with the nuclear deal is worse in at least one way than the 2003 claim that Iraq had illicit weapons of mass destruction: This time around, the lie is more profound.

UN weapons inspectors say that Iran is in compliance. No significant faction of the U.S. intelligence community promotes the opposite claim. Journalists and think tanks everywhere rip this thin claim of noncompliance to shreds. Accordingly, no information-based argument of Iran’s noncompliance has even managed to be successfully sold to the American public or the world. “The [U.S.] president’s decision is a wholly baseless rejection of the conclusion of our closest allies’ military and intelligence services, international nuclear experts and his own Secretary of Defense that the agreement is working,” as a J Street statement put it.

But truth-assessments don’t stop this president from saying what he wants to say and doing what he wants to do. Since his inauguration, he has made thousands of false and misleading statements, an average of six per day, according to the Washington Post’s “Fact Checker” department; he manages this prolific output despite having essentially abandoned the presidential tradition of giving formal press conferences. In disputing news reports, he doesn’t use the word “false” so much as he uses the word “fake,” a term he applies to dismiss anything that is unflattering to him. He drew this equivalence the very next day after announcing his withdrawal from the nuclear deal by referring to “News about me [that] is negative (Fake).” For him, the fake is the negative — not the untrue. Why, then, should anyone believe anything he said about Iran the previous day, or at any time about anything, for that matter? The hard lesson we continue to learn here is that war is still about power, not truth. The so-called Information Age has done nothing to change that, U.S. democracy hasn't been able to put the brakes on it, and the Nuclear Age makes the potential consequences ever more frightening.

Politically, we are not in the Information Age, but the Post-Truth Age. Post-truth means employing falsehoods to gain power, which, says Lee McIntyre, is “the first step towards authoritarian rule.” There is a long, grim tradition of this. "Speaking truth to power" can make a difference only as long as power cares about truth. Today in the United States, it does not.