Katherine Stewart's The Good News Club: The Christian Right's Stealth Assault on America's Children is based on interviews with people involved in the deliberate intrusion of evangelical Christianity into public schools: those who are doing it, and those who are affected by it. Stewart writes: “In 2012, when this book was first published, America’s public elementary schools hosted 3,400 Good News Clubs — evangelical clubs that deceive children young as five into thinking that their public school endorses a certain fundamentalist brand of religion. As of this writing,” she wrote in the Preface to the 2017 Edition, "there are close to 6,000." The effects of the religious agenda are wide-ranging since the Religious Right fears that “the subjects of biology and history and more” are part of an effort to indoctrinate kids with a secularist agenda, and their abstinence-only sex education seems based, in Stewart's estimation, on "sectarian ideas about gender roles."

Whereas the Religious Right maintains a narrative that 1960s Supreme Court decisions against school prayer meant that “God was kicked out of the classroom,” Stewart found by traveling the country to research this book that there were many “religion-driven programs and initiatives inserting themselves into public school systems with unprecedented force and unexpected consequences.” Most of these programs are driven by “a very conservative, even fundamentalist” evangelical Christianity. She spoke with activists who are Biblical infallibilists who believe "they are engaged in a daily struggle with Satan. They also believe that most people who call themselves Christian...will not be among the saved.” Many of them also “believe that the United States has a special role to play in preparing for the imminent end of the world.” Child Evangelism Fellowship (CEF) has a creed that people are saved only through faith, not through good behavior. Rich Lang is quoted as calling CEF “a purity cult. It is intentionally exclusive” of those with different religious beliefs. A. Charles Ware, the president of Crossroads Bible College in Indianapolis and a man who is in an interracial marriage, said in a lecture she attended that he wished to redefine “interracial” to use it to disparage relationships between Christians and non-Christians.

Evangelical programs in public schools are harmful not only to people with minority identities but often to the majority of the school population, as the programs sometimes “enter the schools from outside the community together, and are at odds with it from the beginning.” Stewart quoted Jerry Falwell in 1979 as anticipating the day when “we don’t have public schools. The churches will have taken them over again and Christians will be running them.” Perhaps for this reason, Good News Club wants to operate inside the public schools, not in nearby churches. “Liberals tend to take for granted," Stewart writes, "the part of the right-wing narrative that suggests that religious activity in the public schools arises from a grassroots demand for it," but she contends that "it is the handiwork of well-tuned and very well connected conservative Christian legal groups, and is imposed upon rather than demanded by communities.”

One of their outreach tactics is plying small children with sweets. “Because the Good News Club seeks to reach children who in many cases are not old enough to read, a centerpiece of its program is the ‘wordless book,’ a simple picture book intended to convey religious doctrine....The CEF itself makes quite clear that the purpose of these exercises is not to educate, but to convert.” Stewart listened to some of the presentations to six-year-olds and said: “It’s like hearing a comedy routine for a second time...Everything is scripted...This is religion on an industrial scale, streamlined and codified into a tight set of procedures crafted by experts for maximum ease of use by middle-aged volunteers and maximum impact on the six-year-old mind.”

Older children have participated in events like “See You At the Pole” where they gather near a flagpole and nail pieces of paper containing names of non-Christian classmates to a cross. The first such event happened in 1990. Such so-called “peer-to-peer evangelism” enables “adults [to] use children to do what they’re not allowed to do on their own.”

Stewart spoke to one parent who, in 2009, emailed the other parents in his child’s first-grade class on a closed mailing list to let them know — in an "innocuous" manner, he thought— what CEF was and that it was present in the school. One parent challenged him with the question “How is this [Christian] group different from any other group?” while another said “I need to protect my kids from people like you.” The email spread off the list and he began receiving anonymous rants, one of which especially concerned him with its strident tone and its claim that “your school is harassing and persecuting christians”. Other parents also felt afraid and did not want to identify themselves to Stewart for the book because, as one put it: “When you get into these extreme forms of religion, it always brings out the crazies.”

Many supporters of the Religious Right have ordinary concerns about modernity: crime, declining educational standards, incivility, and the rate of technological change. What unites them into a movement is their attribution of social ills to a perceived loss of Christian power in the mainstream culture (as indicated by support for the belief in a nonexistent "War on Christmas," as Stewart mentioned once and as I have described in an article for Medium), and their solution is that others “are the problem because we are of the ‘wrong’ religion.” (Robert P. Jones concluded his 2016 book The End of White Christian America in favor of Christians adopting an attitude that ”accepts the death of White Christian America and encourages evangelicals to participate fully in a pluralistic society, but avoids the temptations toward domination and sectarianism, each of which is driven by nostalgia for a lost Christian America.”) Stewart doesn’t claim that Christian influence is dying. On the contrary, she fears: “We are witnessing the creation of an industrial-scale evangelical conversion machine.” History suggests it “will never succeed in changing the world in quite the way it imagines, but that it may very well change the world in ways that we would not wish to imagine.”

I was reminded of something in Asad Haider’s recent book Mistaken Identity by the following passage in Stewart’s conclusion, specifically her reference to “the language of liberalism":

“One reason why we haven’t seen what is happening right in front of us is that the leaders of the religious assault on public education have learned to cloak their agenda in the language of liberalism and relativism. We are all children of the civil rights era now. We all agree that discrimination is bad. We all want to respect one another’s worldview, and we all cherish the right to freedom of speech. We are so used to the idea that the First Amendment is for liberals, and that it is our bulwark against fascist movements, that we fail to notice when it has been turned around and used as a wedge instead.

As I wrote in my review of Haider’s book, he argues that “the modern liberal state begins with ‘collectivities of people’ and inflicts its power upon them which somehow atomizes them into individual ‘political subjects — the basic political unit of liberalism, after all, is the individual.’ People are taught that they have rights as individuals so they must state that their personal identity has somehow been wronged if they are to get reparations from the state.” That’s how we end up with what we call “identity politics,” whether we like it or not. And, as Stewart implies, it's important to be able to tell the difference between a plea to address religious discrimination and a bid to assume control. 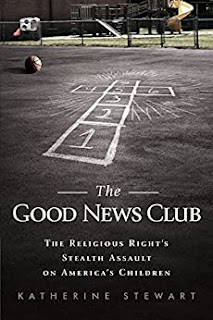 Update: Katherine Stewart wrote "Christian Nationalism Is One of Trump’s Most Powerful Weapons" for the New York Times in 2022:

"A decade ago, the radical aims at the ideological core of the Christian nationalist movement were there to see for anybody who looked...[but] most Republican Party leaders at the time distanced themselves from theocratic extremists. They avoided the rhetoric of Seven Mountains dominionism, an ideology that calls explicitly for the domination of the seven “peaks” of modern civilization (including government and education) by Christians of the correct, supposedly biblical variety.

What a difference a decade makes. National organizations like the Faith & Freedom Coalition and the Ziklag Group, which bring together prominent Republican leaders with donors and religious right activists, feature “Seven Mountains” workshops and panels at their gatherings. Nationalist leaders and their political dependents in the Republican Party now state quite openly what before they whispered to one another over their prayer breakfasts."