Praying with the U.S. president

In 1950, the evangelical preacher Billy Graham, then 31 years old, landed a brief private meeting with President Harry S. Truman at the White House. Graham offered to pray, and Truman consented.

Outside, on the White House lawn, reporters were waiting for Graham. Graham eagerly revealed details of the conversation. Tell us more about the prayer, the reporters asked. And Graham, not realizing the reporters were looking to sensationalize the story, knelt in prayer for the cameras. 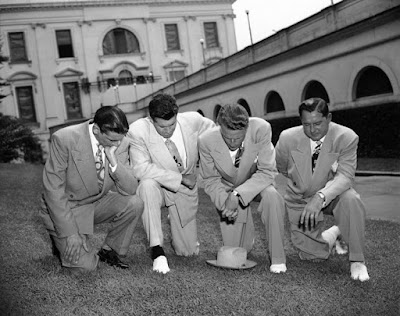 Truman was furious. He thought the preacher's prayer stunt looked ridiculous and made him look ridiculous by association.

What changed in the assumptions of proper presidential behavior?

Flash forward nearly 70 years. Today, the President allows people to pray for him — not just one preacher in private, but multiple preachers, touching him, with official cameras in the room. 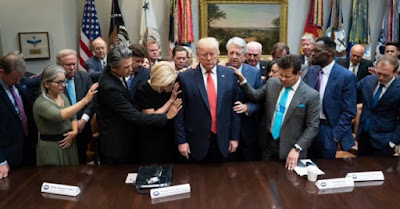 Does it not make him look ridiculous? It does indeed. To me, it appears that the president is the center of a cult and that he wants to be seen as such. Do these white evangelicals care that they are making themselves and the president look ridiculous to everyone who doesn't share their religion? Nope.

And do they care that the president secretly mocks them? Also nope. (Michael Cohen's 2020 book Disloyal reports that Trump said "Can you believe that bullshit?" after pastors "laid hands on him" to bless him in 2011.

Today, this is deliberately promoted. A lot has changed.

.@realDonaldTrump receives a blessing he attends a Church Service at the International Church of Las Vegas in Las Vegas, NV. pic.twitter.com/3pIiGLY03P

A statue of Billy Graham

As of early 2019, sculptors were sought "to design and cast a life like statue of the Rev. Dr. William Franklin 'Billy' Graham, Jr. The statue will become part of the National Statuary Hall Collection in the United States Capitol in Washington D.C."

Rev. Rob Schenck, a white evangelical who acknowledges that he himself once used "street theater" of religious performances (including publicly displaying a Bible, for example), has moved away from those tactics. He reacted to Trump's photo-op in front of St. John's church during the George Floyd protests as a "sacrilege." Schenck says he used to hear his fellow evangelical clergy speak about the transactional nature of their relationship with Trump, but that argument has become uncommon. "That's even more distressing to me," he said, "because what it seems to suggest is that a kind of final conversion has taken place, at least in their thinking, if not in their hearts." In other words, they believe what Trump is saying and doing. They no longer recognize their choice as an unpalatable transaction; it has become less objectionable to them. Schenck worried about their possibility of "reclaiming their moral integrity, regaining a sense of ethics and what is right and wrong — and if they have lost that ability to discern that, then they are indeed in very grave danger, personally. Certainly as a community: I mean, we know what the history of demoralized churches are. They quickly become relics of history, and not good ones. And then, of course, — I'm still a believer in salvation. I believe we have to have a certain standing before God. And if we lose that, we've lost everything."

The religious cult iconography may just be another version of overall fascist iconography, which I submit as an addition to Sarah Churchwell's observations in the New Statesman on September 2, 2020:

"The first fascists emphasised individual heroism and physical perfection: Trump emphasises it, too, but only in regards to himself. He is his own fascist sublime.

Anyone doubting this needs only to consider the iconography he and his family routinely share, such as the photo of Trump’s face superimposed on to the sculpted body of Rocky Balboa, which Trump himself trumpeted on social media. As historians have pointed out, this is fascist imagery, in its glorification of the physical perfection of a mythologised leader. Meanwhile, on 4 July, Trump’s son, Donald Trump Jr, shared a meme of his father’s head Photoshopped on to George Washington’s body, standing in front of the American flag and holding a Minigun and an eagle. Both memes rework images from the entertainment industry, whether it’s Rocky or an image made by the Call of Duty video-game franchise, into neo-fascist propaganda."

Even and perhaps especially following his COVID-19 diagnosis, Peniel E. Joseph argues, he now embodies "a living church whose political insinuations of racial superiority attract unstinting loyalty from his most ardent supporters, no matter how nonsensical and dangerous he becomes; they seem comforted, not horrified, that he is capable of articulating and revising political, medical and personal doctrine on the fly." He "has managed to become a one-person church worshiped by an overwhelmingly, although not exclusively, White congregation that seems to believe he can do no wrong." His "uncanny ability to detect political vulnerabilities allowed him to not just remake the GOP in his own image, but to erect a kind of parallel religious faith — the Church of Trump — where in a crowd of White faces, wearing masks that might save the lives of fellow human beings during a pandemic is never required." If a church is "a gathering place or grouping point for like-minded individuals to learn, express and amplify a set of beliefs that they collectively define and refine over time," then that is what Trumpism is. "While unable to articulate any meaningful religious experience, biblical knowledge or deep belief system, the President has become, for many, the embodiment of a peculiar definition of American exceptionalism."