I have collected these links. Who knows what to do with them? You do. Go do it, please.

"We may avoid the very worst climate scenario. But the next-worst is still pretty awful." Chris Mooney and Andrew Freedman, Washington Post, January 30, 2020. 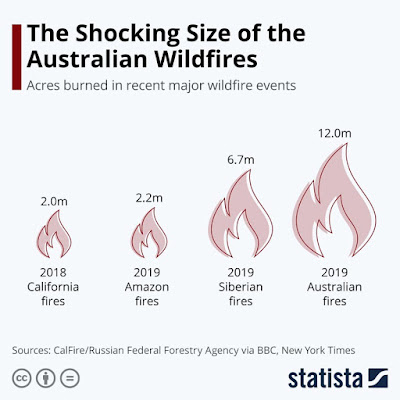 "The 2010s were a lost decade for climate. We can’t afford a repeat, scientists warn." Sarah Kaplan, Washington Post, January 1, 2020.

"A Forecast for a Warming World: Learn to Live With Fire," Thomas Fuller and Kendra Pierre-Louis, New York Times, October 24, 2019

"New Report Suggests ‘High Likelihood of Human Civilization Coming to an End’ Starting in 2050: The climate change analysis was written by a former fossil fuel executive and backed by the former chief of Australia's military," Nafeez Ahmed, Motherboard (Tech by Vice), June 3, 2019

"Only rebellion will prevent an ecological apocalypse," George Monbiot, The Guardian, April 15, 2019

"This Sci-Fi Plan To Beat Rising Seas Could Change The Way We Live – If It Works" Senay Boztas, Huffington Post, April 3, 2019

"While the rich world braces for future climate change, the poor world is already being devastated by it," Tara John, CNN, April 1, 2019

"Greenland's most critical glacier is suddenly gaining ice, but that might not be a good thing," Brandon Miller, CNN, March 28, 2019

"For Climate Safety, Call in the Engineers: At the recent United Nations Climate Change Conference in Katowice, Poland, diplomats delivered a "rulebook" to guide all countries in combating global warming. When world leaders convene at the UN next September to advance climate safety further, the world’s leading engineers should greet them with a global framework for action." Jeffrey D. Sachs, Project Syndicate, December 20, 2018

"David Attenborough: 'The collapse of our civilizations is on the horizon'," Mark Tutton, CNN, December 4, 2018

"Australia is devastated by drought, yet it won't budge on climate change," Angela Dewan, CNN, August 22, 2018

" Scientists lay out how to save a melting Antarctica — and the grim future if we don't," Jen Christensen, CNN, June 28, 2018

"Pediatricians are concerned about climate change, and here's why," Jacqueline Howard, CNN, May 8, 2018