Van Jones: We are called to 'a personal and spiritual accounting'

"It is too late to be innocent."

This is Van Jones explaining things on CNN on May 29, 2020. Jones worked in the Obama administration and is now a political commentator and civil rights activist. (The man who appears on the right later in the video clip, but who isn't shown speaking, is W. Kamau Bell, a stand-up comic and political activist.) 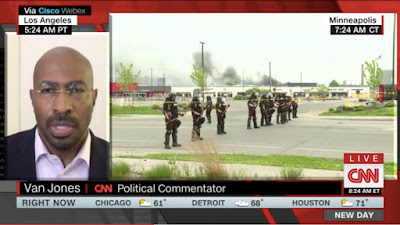 The subject matter is the protests against police brutality in the United States in late May 2020.

I encourage everyone (especially white people) to play this video and listen to Van Jones directly. The video is not captioned, so, for those who are hard of hearing, as well as for those who need a little context to understand where Jones is coming from, here's my paraphrase:

- May 30, 2020
Email ThisBlogThis!Share to TwitterShare to FacebookShare to Pinterest
Labels: activism, knowledge, race