Some highlights of the eunuch narrator in Russell Hoban's Pilgermann (originally 1983). The novel presents as a stream-of-consciousness dream experience across time and beyond mortality. To the extent that this can be said to have a "plot," there are spoilers.

Pilgermann is a German Jew who, having transcended his human existence, has become "waves and particles" and may choose to "turn up as an owl." He is narrating from some far-off spot in history. He most vividly remembers the early morning of July 31, 1096 C.E., which was the Jewish holiday of Tisha b'Av. He is not especially religious but does go to synagogue on occasion. He remembers nothing of his profession — "I think I may have been a tailor or a surgeon or something of that sort" — but he remembers lusting after a woman who he sees through her upper-floor bedroom window.

She happens to be married to a tax-collector who leads the town's militia. Of him, Pilgermann remarks, "such a man as that cannot live without a Jew to be other than. If there were no Jews he would invent them, he would dress up as a Jew and flog himself." And of her, Pilgermann says: "...such nakedness! It continues in my eye, splendouring. It will always be there, an image of such power as to confer unending Now upon the mind that holds it. Always now the great dark house in the Keinjudenstrasse late at night. Always now I, the solitary late-night Jew walking where he is not wanted."

He climbs a ladder, and she welcomes him: "Thou Jew! My Jew!" and reveals her name to be Sophia. He reflects: "The centre of time is, as I have said, the waiting. This is now off the centre, this is the motion of the everything, the action of the universe, the destined world-line of the soul, the living heart of the mystery." As he walks home in the early morning hours, he is assaulted by Christians who lift his robe and remove his pants, noting his circumcision and saying, "You can be sure he's had Christian women with it, filthy brute." As they mutilate him with a knife, allegedly to "make a Christian of him," removing his "member and testicles," he says: "I think of Rabbi Hananiah ben Teradyon martyred in the Hadrianic persecutions, wrapped in the Scroll of the Law and burned at the stake. As he died he said that he saw the parchments burning but the letters of the Torah flying up out of the fire. I too now see the black letters shimmering and twisting as they rise on the heated air, soaring above the flames like birds of holy speech to the blue sky. I see the black letters writhing round the holy nakedness of Sophia going up, up, out of sight into the blue morning." His assailants argue whether to kill him, and just then the tax-collector shows up and orders them to let him live.

He lies alone on the road, in pain, expecting that a nearby sow has eaten his severed genitals, and observes that in the distance the synagogue is burning. Just then, a vision of a blond, blue-eyed Jesus appears to him. "He was no one in whom I had any belief but there he was and there was no mistaking who he was." The injured man objects: "You're not the one I was calling." And Jesus answers: "I'm the one who came through. I'm the one you'll talk to from now on."

Jesus insists that his mutilation “is what you wished.”

He denies it. “I am young, the blood in me runs hot, I lust but I am unmanned. I lust, I long, I yearn, I hunger, I hum like a tuning fork, I flutter like a torn banner in the wind. That which I was I can never be again, that which I am is intolerable, that which I shall be I cannot imagine. I glimmer like a distant candle, I mottle like the sunlight on the carpet, like the shadows of leaves. I am something, I am nothing, I am here, I am gone.” He didn’t want to be talking to Jesus, either, he insists.

Jesus says: “Always you wished it, and most of all when you put hand and foot to that ladder of love and pleasure…the only wholeness is in letting go, and I am the letting go.”

He decides to set out as a pilgrim to Jerusalem. What happens then seems to be a continuous dream-sequence in which he collapses the concept of time. At one point, attacked in the forest, he slashes back with a knife, and says to himself: "When I had balls I didn't have this much balls."

He fights with a woman, who says, as he wrestles her down and sits on her: "Are you just going to sit there, aren't you going to have me?"

Soon he begins to reflect that, had he not been castrated, none of this adventure would be happening. And eventually he compliments his own transformation: "When I had my proper parts I must have been blind and deaf, the world had not come alive for me, I had never talked with Christ, had never put my feet into the footsteps of my road away, had never, alone in a dark wood, seen the light of Now. So, Pilgermann, let your heart have balls, and on to Jerusalem."

In one episode, he comes across a man who is hanging a bear by a rope. The man calls to the bear as he strangles it: "My God, my God, why hast thou forsaken me!" Pilgermann uses his knife to cut the rope. The bear falls from a great height and lies still. The man accuses Pilgermann of having killed God. "He was a bear," Pilgermann attempts to correct him. The man explains: "God can be whatever he likes, completely and divinely; he always used to find me honey trees. And you've killed him, you've killed God." The man is going to shoot Pilgermann with a bow and arrow, but the bear stands up, so the man shoots the bear instead. The man again mourns: "O my God, my God, why hast thou forsaken me!" Pilgermann responds that "he hasn't forsaken you—you've killed him. The man clarifies that he forsook him in this manner: "He wouldn't show me any more honey trees."

Propositioned by a sow, he muses silently "whether a penis and testicles might have such a thing as a ghost, and whether a live eunuch might couple with a dead sow by means of the ghost of a penis. Never in my life had there been so many sexual invitations as now when I was castrated."

A ghost insults him as a "clipcock" and then revises the insult: "I forgot, you ain't even that no more, you're a no-cock clipcock."

He boards a ship which is taken by pirates, and he is sold to the pirates, who strip the new slaves of their clothes and possessions. "The pirate captain was delighted to find that I was a eunuch in good condition; he made that gesture of kissing the fingers made by all vendors who reckon that they have something especially fine to sell." They go to a slave market in Tripoli. He is mildly excited at the thought of serving a harem, since "orchards are pleasant even if one can't climb the trees." He is bought by a merchant in Antioch, and immediately they make the arrangement that he is not to be a slave but rather a free man and a friend. The merchant interprets for him the verse in Isaiah about the eunuch being given "an everlasting memorial, that shall not be cut off." The merchant says: "Better than sons and daughters is to be with the stillness that is always becoming motion."

He narrates his ordinary life: "Every morning when I woke up I had perforce to put on the identity of Eunuch....I would say, 'Yes, but still there are things to be done, still there is life and world, still there is action required of me.'"

The merchant tells him that Noah in the Bible "ended up like you" and adds that "the crux of the matter is whether you start out as a eunuch or only end up as one. Did you start out complete?" Pilgermann says he did, "at least physically." The merchant tells him to contemplate "this tradition of a castrated Noah" and says that there is a cosmic system of "debits and credits." He admits: "I don't know what the Lord has given you in exchange for what has been taken from you."

Pilgermann's next difficulty is confronting his status as dhimmi, a non-Muslim in a Muslim land. Dhimmis "wore yellow turbans and belts and were not allowed to ride horses or carry weapons. Perhaps because I was already castrated I found this further diminution galling. I had not so far flouted the law by carrying weapons or riding a horse but I had not put on a yellow belt and turban. In my mind I tried to, but could not, put into words my reasons for not wanting to be welcomed into a community of yellow turbans. Nor would I ever again be a member of any congregation other than that vast and erring one called the human race." The Rabbi warns him that he can't "pass for a Muslim" anyway and "will simply be known as the eunuch Jew who does not wear the yellow belt and turban." Pilgermann replies: "So be it." He is later questioned by a Muslim, and he claims that Jews don't consider a eunuch to be properly a Jew. Pilgermann expects the man to reply that he is nonetheless Jewish according to Muslim standards, and therefore still a dhimmi, but the man says nothing.

He then muses that mortality itself is a kind of castration. He imagines God telling him: "I have already castrated you with mortality but you pay no attention to it. So now let it be done with a knife, then let's see what happens. Let's see if you'll grow yourself some new balls and jump into the mystery with me."

He then dreams he sees Sophia's murdered body on a pile of corpses, but her two-year-old son is alive, and he realizes it is his son. 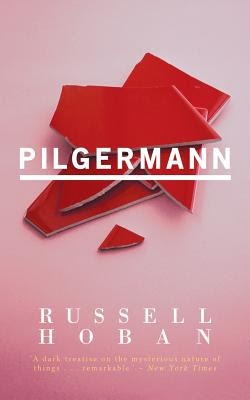 - May 22, 2020
Email ThisBlogThis!Share to TwitterShare to FacebookShare to Pinterest
Labels: eunuchs in literature