Poul Martin Møller (1794-1838) is known for his poem "Joy Over Denmark." As I collect references to eunuchs, here, I point out the eunuch in the third-to-last stanza. The translator wrote "Listen to the eunuchs' voices whining," but Möller's original Danish is "Lytte paa den sorte Halvmands Triller" ("Listen to the black half-man's trilling"). The implication is that the eunuch is a harem guard, as he is physically near an Eastern lord and the women he has paid for ("Østens Drot blandt kjøbte Friller"). The poem's overall point is that, while other countries are imagined or known to be wealthy or exotic, the relatively modest Denmark remains beautiful to the poet. The exoticized treatment of other lands is unlovely to me, but it is typical of Western literature that mentions eunuchs.

Here between the shadows of the shifting
Ocean never come the budding springs;
Only heavy whales go slowly drifting.
While the silent seagulls hover, lifting
Quarry from the waves, with moveless wings.

Friends afar in shining Danish summer,
Do you hail your comrade any more?
Here the tropic wind, a tireless drummer,
Beats against the sails, and this newcomer
Dreams of native fields by Dana's shore.

East or west, however far I wander,
I will think of you by Denmark's Sound;
Even where Constantia's vineyards squander
Splendid beauty, I imagine yonder
Bright Charlottë's beechwood, summer-crowned.

Slaves of silk-clad Orientals hear them
Stir their fans in torrid discontent,
With their heartless, jeweled mates that fear them,
Gorgeous birds, but not a song to cheer them,
Gaudy tinsel flowers that have no scent.

Could you buy the faith of Northern maiden
With the promise of a golden boon?
Buy a gust of sea-waves fragrance-laden,
Clover fields for slumber, or a glade in
Denmark's fields to dream away the noon?

Poor men who have ploughed their Danish furrow
Shake the fruit from their own orchard trees;
Mind and body quick at work and thorough,
Corn and milk aplenty for to-morrow;
Heifers drowse in grass up to their knees.

Let the Master of the East, reclining
With his purchased women, doze and nod,
Listen to the eunuchs' voices whining
Through the columns echoing and twining,
While he dozes, an exhausted god.

Underneath the beech, the Danish lover
To the loveliest repeats his vows.
Drifting moonlight showers white above her;
Mirrored swans on haunted waters hover;
Nightingales sing loudly in the boughs.

If such things be poverty's true measure,
Silk-clad eastern prince, I understand;
Then I break my Danish bread at leisure,
Thanking God, I too exclaim with pleasure,
'Denmark is a little, beggar land!' 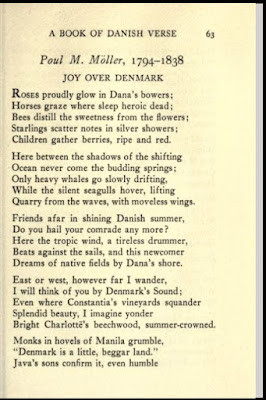 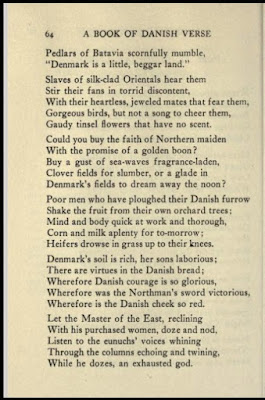 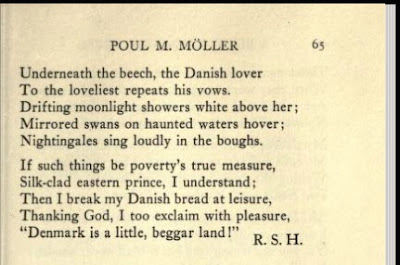 - October 04, 2021
Email ThisBlogThis!Share to TwitterShare to FacebookShare to Pinterest
Labels: eunuchs in literature