Quotes on the drive for a romantic relationship

"In spite of what I've experienced and observed, I still cling to the image of a relationship between a man and a woman in which each can function better, and grow further, and love more because of the other. Sometimes all this has seemed so close that I believe it's possible.

But always, as those relationships became more intimate, I felt instead how they limited my growth, how the compromises required to keep the relationship alive were deadening important parts of me, and I decided that my wholeness was more important than the love. But I miss that kind of love a lot.

And I still wonder what's so radically wrong with me, so absolutely unlovable about me, that no man has ever loved me in a way that I can now respect as love.

"The supreme happiness in life is the conviction that we are loved."

”Relationships are murdered in the pursuit to define love. Love is sibling to faith, as they are both natural responses to a mystery. We have captured love and now we can buy and sell it, we can withhold it to be punitive; we even write books instructing us how to feel it. It is no more enough just to love; now people want this love to give them something. To validate themselves, to give a sense of worth to their lives, in this way love becomes currency, we barther with this love, that began as an inspiration; and all too often becomes a means to manipulate a price from another, I love you therefore you owe me this...”

"They do agree on a passage from The Late Bloomer to be read at the service by one of Amelia’s college friends.

'It is the secret fear that we are unlovable that isolates us,' the passage goes, 'but it is only because we are isolated that we think we are unlovable. Someday, you do not know when, you will be driving down a road. And someday, you do not know when, he, or indeed she, will be there. You will be loved because for the first time in your life, you will truly not be alone. You will have chosen to not be alone.'”

“In encountering another, one is confronted not with an immutable fact but a pathway of possible intimacy. One speaks of someone being ‘closed’ or ‘open,’ of ‘getting through’ to them, of finding the ‘chinks in his armor.’ A person is like a path: a space whose trajectory we may or may not be invited to share. We long to trust others enough to dismantle the boundaries we initially want them to respect. To be intimate with another is to be allowed inside their life and to let them enter yours. As we embark on the seemingly endless quest of mutual understanding, we become a chapter in each other’s story, figures in each other’s dreams, creators of each other’s self. To know another intimately is not achieved by dissolving the differences between us but by allowing the space to draw them out. Such differentiation is realized through probing and being probed by the otherness of the other.”

”Where the myth fails, human love begins. Then we love a human being, not our dream, a human being with flaws.” 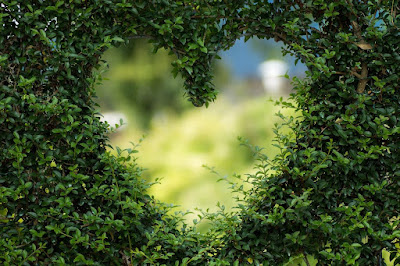 Image by 2023852 on Pixabay
- April 28, 2016
Email ThisBlogThis!Share to TwitterShare to FacebookShare to Pinterest
Labels: love