The 2017 persecution of gay men in Chechnya 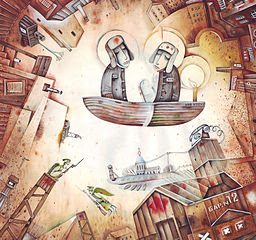 Gay men in Chechnya already had to use assumed names to meet at cafes, but today Chechnyan police agents are leading sting operations in which they conduct online chats with gay men, arrange in-person meetings, then ambush, kidnap, and torture them and force them to inform on other gay men. A possible triggering event for the violence:

"The crackdown began after GayRussia, a rights group based in Moscow, applied for permits for gay pride parades in the Caucasus region, prompting counterprotests by religious groups, the men said. In Chechnya, it became something even worse — a mass 'prophylactic' cleansing of homosexuals, the security service agents told the gay men as they rounded them up."

The persecution was first reported on April 1, 2017 by the newspaper Novaya Gazeta as having resulted in over 100 arrests and three deaths up to that point.

In response to these reports, the press secretary for Chechnya's leader Ramzan A. Kadyrov essentially affirmed his support for the policy of killing gay men without directly admitting to it. "If there were such people in Chechnya," the press secretary said, "law-enforcement agencies wouldn’t need to have anything to do with them because their relatives would send them somewhere from which there is no returning."

Of the three reported fatalities, one was due to torture and the other two were victims of so-called "honor killings" by family members after they were released. Tanya Lokshina, the Russia Program Director for Human Rights Watch said that, in Chechnya, "victims of torture and other horrific abuses refrain from seeking justice or withdraw their complaints as a result of threats, including death threats and threats of retaliation against family members."

On April 13, the Geneva-based office of the U.N. Commissioner for Human Rights said that Russia should "put an end to the persecution of people perceived to be gay or bisexual." On April 15, former U.S. Vice President Joe Biden said: "The United States must lead the way to demand an end to these egregious violations of human rights." On April 18, a CNN video interviewed one man whose face and voice were blurred to protect his identity. On April 19, Putin said the claim of the pogrom was "libelous," and the next day, Putin's spokesman maintained that Russia had found no evidence of arrests in Chechnya.

Andrew E. Kramer interviewed several men for his article "'They Starve You. They Shock You': Inside the Anti-Gay Pogrom in Chechnya." Published in the New York Times on April 21, it provides disturbing details. One man in his 20s reported that he was brought to an apartment where five other gay men had already been brought for the same reason and that his assailants "strapped him to a chair, attached electrical wires to his hands with alligator clips and began an interrogation." The men were held for up to several weeks.

On April 21, Sir Alan Duncan, Britain's deputy to Foreign Secretary Boris Johnson, told the House of Commons that "sources have said that he [Kadyrov] wants the [LGBT] community eliminated by the start of Ramadan." Ramadan begins on May 26 this year. Duncan also said that he and British Embassy representatives had spoken to the Russian government about the persecution.

On May 2, Lewis Corner wrote for GayTimes that a man had told France 24 News: "They tell the parents to kill their child. They say ‘Either you do it, or we will.'" On May 3, Will Stroude wrote for Attitude "that the families of those imprisoned are eventually summoned to the prison, where they are tasked with carrying out their own relative’s execution" in the account of a victim who spoke to France 24. Stroude wrote that Novaya Gazeta had increased its fatality count to over 30 men "executed by the authorities or their own families".

"Russia has faced increasingly loud calls from the international community to bring an end to the violence, and while a Russia Foreign Affairs minister confirmed to Yahoo News’s Katie Couric last week that an investigation into the situation was currently taking place, she was reluctant to comment on the matter further."

In a July interview with HBO's Real Sports, Kadyrov tried to evade a question abut the persecution of gay men and then said: "We don't have those kinds of people here... If there are there take them to Canada... Take them far from us so we don't have them at home... To purify our blood, if there are any here, take them." Of the reports of torture, he said, "They are devils. They are for sale. They are not people." And of the United States, he said, "Even if our government was completely destroyed, our nuclear missiles would be automatically deployed. We will put the whole world on its knees and screw it from behind."

Emergency legal and travel assistance is coordinated in Russia by the Moscow Community Center, the Russian LGBT Network, and by Canada-based Rainbow Railroad that says it is working with the Russian LGBT Network. The head of LGBT-Set-Russia has been quoted in the news regarding the need for such assistance. Amnesty International UK has petitions called "Chechnya: Stop Abducting and Killing Gay Men" with over 170,000 signatures and Protect Journalists Who Revealed Abuse of Gay Men in Chechnya with 30,000 signatures as of May 4.

In 2017, “secret” me was outed to state authorities. I still don’t know how or by whom. I can only guess that the police tortured someone I knew until they gave me up. I believe this because I, too, was tortured. Kidnapped from my place of work. Beaten. Electrocuted. Starved. Held with a gun to my head and told to give up other “secret” people. I refused, ready to die.

He was helped by the Russian LGBT Network and Rainbow Railroad.