With headlines like these, it is normal to feel anxious

Apart from my four newspaper subscriptions, TV, and radio, here are some articles about the current U.S. government that I've stumbled across online over the past month, most of which I haven't had time to read or digest in full. The headlines alone are intense. Mostly what I am learning is that it is normal to feel overwhelmed, anxious, and worn out. If you feel the same way, you are not alone. 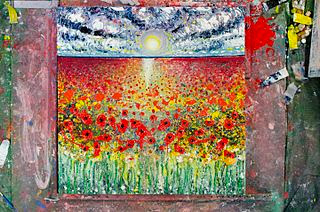 "A display of unbelievable ignorance: In a real country with a real president, Trump’s AP interview would destroy him." Our president thinks the Pentagon is a company, terrorism was a recent invention and 9/11 was a ratings coup. Bob Cesca, Salon, April 25, 2017.

"Trump's Fitness To Serve Is 'Officially Part Of The Discussion In Congress'," New Yorker writer Evan Osnos with NPR's Fresh Air hosted by Terry Gross, May 4, 2017.

"Why the Sally Yates Hearing Was Very Bad News for the Trump White House," David Corn, Mother Jones, May 8, 2017.

"Experts on authoritarianism are absolutely terrified by the Comey firing," Zack Beauchamp, Vox, May 11, 2017.

"The End of Trump," Robert Reich, RobertReich.org, May 14, 2017.
"The law is reasonably clear. If Trump removed Comey to avoid being investigated, that’s an impeachable offense."

"Trump Team Knew Flynn Was Under Investigation Before He Came to White House," Matthew Rosenberg and Mark Mazzetti, New York Times, May 17, 2017.

"Here Comes the GOP Bloodbath," Erick Erickson, Washington Post, May 19, 2017.
Quote: "Trump is increasingly disliked, and the Republicans who enable him are increasingly distrusted....Unless Republican leaders stage an intervention, I expect them to experience a deserved electoral blood bath in November 2018."

"Former CIA Director Brennan: “With every last ounce of devotion to this country, resist," Kaili Joy Gray, ShareBlue, May 23, 2017.

At the NATO conference in Brussels on May 25, 2017, Trump shoved his way in front of Montenegro's Prime Minister Dusko Markovic (VIDEO) and publicly lectured the allies that they were not paying enough into defense (CNN VIDEO).

"Zombie Trumpcare at a glance, from the CBO," Joan McCarter, Daily Kos, May 25, 2017.
"By 2026, 51 million people will be uninsured...the [cost] increase would be disproportionately larger among older people with lower income...premiums for people buying comprehensive plans would be unaffordable...It would cut $834 billion from Medicaid in the next ten years, and cut 14 million people out of Medicaid coverage."

"Big-time backlash: When all polling on Donald Trump is dismissed as fake," Howard Kurtz, Fox News, May 26, 2017.

"Boehner: Trump's presidency so far is mostly 'a complete disaster'," Deirdre Shesgreen, USA Today, May 26, 2017.
"The Ohio Republican [and former House Speaker] said Trump has handled national security and foreign policy issues well, but added: “Everything else he’s done (in office) has been a complete disaster...He’s still learning how to be president."

- May 27, 2017
Email ThisBlogThis!Share to TwitterShare to FacebookShare to Pinterest
Labels: trumpism