'This is Pride Month': So simple, even a burrito can do it

Making a statement in favor of LGBTQ rights and dignity is easy. Today in the United States, it isn't even politically risky, since a clear majority of Americans say they believe that same-sex relations are morally acceptable, should be legal, and should be permitted the rights of marriage.

A football team can make a statement. Two Los Angeles football teams, the Rams and the Chargers, are sponsoring June 2017 Venice Pride in Venice, Calif. Spokespeople for the teams mentioned motivations like "acceptance and equality" and "equity, diversity and inclusion."

A fast-food chain can make a statement. In Massachusetts, the burrito restaurant Chipotle will donate 50% of the proceeds of each sale on Sunday, June 4 to Boston Pride if the customer mentions the promotion, according to an email sent by Boston Pride.

The president can make a statement, but he will not. On June 1, the White House issued proclamations to celebrate June as "National Homeownership Month," "National Ocean Month," "African-American Music Appreciation Month," and "Great Outdoors Month," according to Nick Duffy, who added that the president "maintains a hardcore base of gay Republican supporters. They mainly point to that time he waved an upside-down rainbow flag." (The event in question was one week before the election; the flag was hand-lettered with his own name. Note its literal message "LGBTs for Trump," not "Trump for LGBTs.")

(Update: As of June 30, the White House still would not comment on CNN's question about the neglect of Pride Month.) 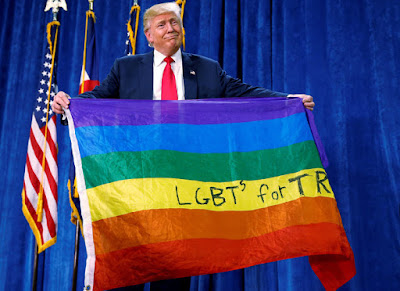 In the past, then-Presidents Bill Clinton and Barack Obama issued proclamations supporting Pride Month. Obama also hosted receptions for leaders in the movement. Zack Ford wrote that the current president, "who has long claimed to be an LGBTQ ally, could have become the first Republican president to acknowledge Pride Month with a proclamation, but he didn't — and the silence is deafening." Furthermore, Ford wrote,

LGBTQ issues were mentioned during his campaign only "when he was trying to convince the queer community to embrace Islamophobia."

As candidate, on June 13, 2016, he implied that supportive words may not be necessary because he was going to demonstrate his commitment with actions. What kind of actions? Cracking down on immigration. He was blaming immigrants for holding anti-LGBT values and, by making this comment, he tried to shift attention away from his own values.

"Why does Hillary Clinton want to bring people in in vast numbers who reject our values? Why? Explain. Ask yourself who is really the friend of women and the LGBT community, Donald Trump with actions or Hillary Clinton with her words?"

"LGBT Americans face an assault on their rights from the White House and House Republicans, who are gutting HIV prevention and treatment initiatives, dismantling protections for transgender children in public schools and conspiring to render LGBT Americans invisible in the census."

The website of the Log Cabin Republicans, a group that self-describes as "the nation’s largest Republican organization dedicated to representing LGBT conservatives and allies," does not publicly challenge the current administration on the subject of Pride Month. In fact, their website does not mention Pride Month at all. It is not clear if they celebrate it.

My burrito will make a small statement, but the president will not.