Robert B. Greenblatt was a mid-twentieth-century endocrinologist who contributed to the development of oral contraceptives.

His book Search the Scriptures places a modern endocrinological interpretation on certain Biblical references. His first case examines the likelihood that Esau, who transferred his anticipated inheritance to his younger brother in exchange for lentils when he suddenly felt he was about to die of hunger, was probably hypoglycemic. This book has a chapter on eunuchs titled "And They Sang Like Cherubs." The epigraph is Matthew 19:12 and the leading questions are "Why emasculation? What is the role of the endocrine glands in the development of character and personality? 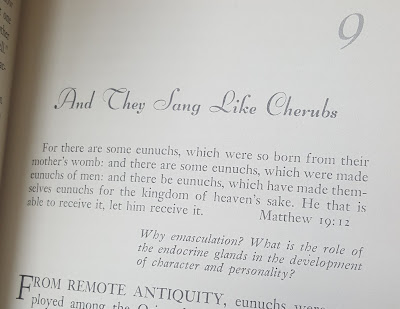 Apart from some advice about how sex glands operate (noting Brown-Sequard's folly), most of Greenblatt's comments are of a historical nature. He acknowledges that servants were castrated "in the Orient, in the Middle East, and later in Greece and in the Roman Empire" since ancient times (though not by the Hebrews, according to Josephus and likely in obedience to the law in Deut 23:1) and more recently "for Moslem harems," and he reveals that an Assyrian bas-relief produced in some century BCE "depicts a vizier and a eunuch, in which the contrast between a normal and a mutilated male is vividly portrayed." He contradicts himself about the general awareness in ancient times of the differing impact of pre-pubertal and post-pubertal castration: "Eunuchs castrated in boyhood are known," he says, "for their fidelity; those castrated later in life have been often suspect, correctly," (p. 54) yet he also says that pre-Christians did not know that "this form of mutilation, for the best results, must be performed before maturity in both man and beast." (p. 56) It is unclear how to reconcile those two statements.

He mentions Christian sects that encouraged castration: the Valesii in the 3rd century and the Skoptsi in the 18th century. He also mentions that Pope Leo XIII banned the castration of singers, then a popular practice in Italy, in 1878. He says that the KJV Bible contains 26 instances of the word "eunuch," but that readers should be aware that the term, "especially in Egypt, was even applied to non-castrated, but loyal, servants and administrators of the king."

He says that inmates of the Nazi concentration camps Belzen and Auschwitz were castrated by "x-ray irradiation," though he implies conflicting descriptions of whether this injury was "punitive" or experimental pseudoscience "to study the tissue changes induced by X-rays." (He was aware of two survivors of these Nazi experiments living in the U.S. who had consulted doctors about their hormone deprivation.)

This history notwithstanding, he says his main interest lies in the Biblical recognition in Matthew 19:12 that "some eunuchs...were so born from their mother's womb," something that he sees, as an endocrinologist, as a "diagnosis of congenital eunuchoidism or primary testicular failure." However, he does not explore this further. He does not give any examples of congenital eunuchs.

As a bonus, he quotes the description of the "beardless and goat-voiced Pardoner" from the Prologue of the Canterbury Tales in the Middle English.

Robert B. Greenblatt. Search The Scriptures: A Physician Examines Medicine in the Bible. Philadelphia: J. B. Lippincott, 1963.