LGBT people struggle to survive a purge in Tanzania

In Tanzania, the Dar es Salaam regional commissioner has asked the public to report gay people. "Give me their names," he said on Oct. 29. "My ad hoc team"—a committee of 17 police and media officials—"will begin to get their hands on them" in just one week. The next day, he reported that he'd already received over 100 names in over five thousand messages. Although the Tanzanian government clarified that this regional effort does not represent the national government's official policy, it was not clear if the national government intended to stop the Dar es Salaam regional purge.

The organization Jinsiangu, supported by the International AIDS Alliance (donate), has helped people relocate internationally to Nairobi, Kenya for their personal safety.

Tanzanian law, an inheritance from British colonialism, punishes men who have sex with other men with 30-years-to-life in jail.

"According to 2014 UNAIDS data, 17.6% of men who have sex with men in Tanzania are living with HIV — a rate more than four times higher than the 4.5% in the nation's general adult population. * * * Being forced into hiding also means people do not want to engage in any way with health services and will not test for infections or go to collect HIV treatment. People will avoid anything that will link them to being LGBT and subject to identification, [International HIV/AIDS Alliance executive director Christine] Stegling said."

Recently, LGBT organizations have been shuttered. In February 2017, Tanzania's deputy health minister claimed that homosexuality is not found among animals, only exists among people who live in cities, and is a social construct. The health ministry prohibited HIV/AIDS clinics from running their programs, and then arrested 13 people—including deporting three South African lawyers—who met to discuss how to challenge that new policy. The shutdown of the clinics and the arrest of the activists was done on the grounds that it is illegal to promote homosexuality.

According to a Guardian article: Geofrey Mashala, an activist who is "making a documentary about the Tanzanian LGBT community," said that, considering “all the steps we made as LGBT activists" over the past several years, "it’s like we have to start over again.” Erin Kilbride of the human rights group Front Line Defenders interviewed 80 LGBT people and sex workers earlier this year; "all but two said they had been sexually assaulted or raped by police in custody." 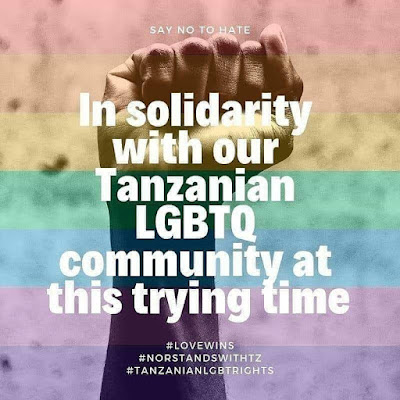