Insights emerging from a strange actor in the US Capitol riot: How some people believe rights and responsibility work

One of the stranger and yet most revealing comments about ethics I have personally seen has appeared in the context of the riot at the US Capitol on January 6, 2021.

Richard Barnett, 60, from Gravette, Arkansas, is one of the people who stormed the U.S. Capitol. He entered the office suite of Nancy Pelosi, Speaker of the House of Representatives, and sat at a desk full of papers, a computer, and a telephone. In one photo attributed to photojournalist Jim Lo Scalzo, Barnett gleefully holds up an envelope with Nancy Pelosi's name in the return corner and a typed address for Republican Rep. Billy Long. Barnett removed the envelope from Pelosi's office, replacing it with a coin. 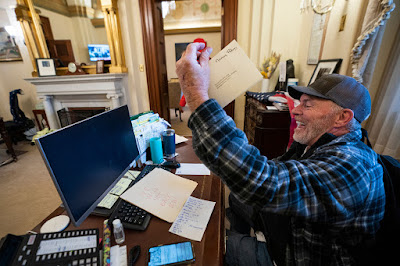 [This photo is by Jim Lo Scalzo/EPA-EFE/Shutterstock and was published by the New York Post.]

New York Times reporter Matthew Rosenberg interviewed Barnett and posted video of the interview to Twitter. In that interview, Barnett maintained: “I didn’t steal it [the envelope]."

Here is his argument: "I bled on it because they were macing me and I couldn’t f-ing see." He added: "So I figure, ‘Well, I’m in her office, I got blood in her office, I’ll put a quarter on her desk even though she ain’t f — ing worth it.'"

He also told 5News: "I put a quarter on the desk because I’m not a thief."

His rationalization seems to be: He was injured while storming the Capitol. (He may feel sorry for himself about that.) Because he has bled on the envelope, it now somehow belongs to him or it otherwise ought to be removed. Additionally and separately, the envelope seems to be purchaseable: If he leaves $0.25 in its place, he has paid for it. The envelope at least is worth that much, even if the Speaker of the House herself is not worth anything, in his view.

Rosenberg tweeted that Barnett had bragged: "I wrote her a nasty note, put my feet up on her desk and scratched my balls." He claimed that the note said: "'Nancy, Bigo was here you bitch.'" Inside Edition published a photo showing a sheet of paper inside a manila folder; directly on the manila folder, someone had written: "WE WILL NOT BACK DOWN."

The Daily Dot reported that Pelosi's "office was vandalized by a number of President Donald Trump supporters, who flipped desks, tore pictures off the walls, and rifled through the speaker's property."

Rosenberg added: "[Barnett] claimed that he was politely knocking on the door of Pelosi’s office when he was pushed in by other protesters. It was a story he knew no one would buy — 'I’ll probably be telling them this is what happened all the way to the D.C. jail,' he said." 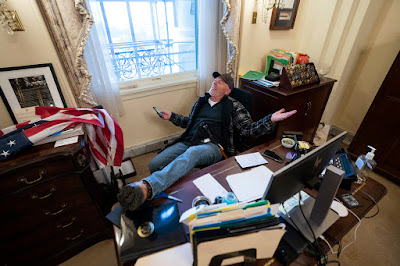 On January 2, on a Facebook page under a fake name, Barnett had criticized Pelosi "for using the description 'white nationalist' as a 'derogatory term.'" He argued: "I am white. There is no denying that. I am a nationalist. I put my nation first. So that makes me a white nationalist." Thus, he concluded: Anyone who doesn't identify as a nationalist should "get the f--- out of our nation." (Note: The definition of "white nationalism" is not the appreciation of the nation in which one happens to live while simultaneously happening, quite incidentally, to be white. The correct definition is, rather, the ideology of white identity and the desire to build a white ethno-state.) The Washington Post also reported that he has recently shared conspiracy theories online about the coronavirus vaccine and helped fundraise for a campaign tied to QAnon. Though he supported the police in the context of the 2020 George Floyd protests, the storming of the Capitol in which he participated led to the death of a Capitol police officer, Brian Sicknick.

Apart from possible charges of domestic terrorism for breaking into the Capitol, he might face federal charges of stealing mail under US Code Section 1708. He was indicted on seven counts and remained in custody as of March 2021.

In April 2020, Barnett received a PPP loan of $9,300. PPP loans are a form of government assistance that were created to address the economic troubles of the coronavirus pandemic: generally, they are supposed to be repaid, though in certain circumstances they can be forgiven.

One could pull this apart for a long time, if one had time and interest. For me it provokes some insights about how some people believe ethics works and what they believe liberty is about.