A teenager’s vision of utopia: Kill off the criminals!

'Death Note' is a clever, absorbing manga series about a teen who acquires supernatural power to kill people.

"Death Note" is the clever, absorbing, illustrated tale of a teenage boy who stumbles across a supernatural tool. Simply by writing someone's name into the so-called Death Note, a book originally belonging to a death god, the teenager is able to determine the time and manner of their death.

The book's new owner doesn't write in the names of his personal enemies, as one might expect some teenagers to do. Rather, as an excellent student and the son of a police officer, he immediately begins a social experiment by writing in the names of jailed criminals. He believes he is crafting a crime-free utopia over which he will eventually rule as a righteous dictator (after he graduates, of course). 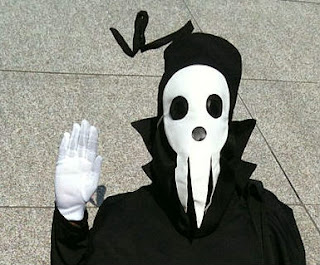 His mentor in this project is the death god himself. The being's name is Ryuk, and he is one of many shinigami, the Japanese word for the death gods. Ryuk does not outwardly express loyalty to any particular person or social agenda, but he occasionally reveals one of the supernatural rules that govern the use of the Death Note. He also proffers the Faustian bargain of additional magical powers in exchange for a reduced lifespan.

Ryuk wins the award for the creepiest, most evil invisible friend ever. In the art by Takeshi Obata, the death god has the physique of an orangutan and the wings of a pterodactyl. He has bulging, unblinking eyes and a freakish, fixed grin that looks as though it was carved into his face with a knife, revealing pointed teeth. He follows the protagonist around, but no one else can see him or hear him.

The godlike power to kill people mainly by the power of imagination is reminiscent of the Twilight Zone episode "It's a Good Life," based on a 1953 short story by Jerome Bixby. In that episode, a six-year-old boy can make anything on earth die or disappear simply by wishing it. The narrative flaw in "It's a Good Life" is that the existence of the entire planet depends on a boy's petulance, so the world - and therefore the story - ends too quickly.

Death Note's writer Tsugumi Ohba avoids this plot pitfall by restricting its protagonist's powers. The teenager who possesses the death god's notebook can ordain anyone's death, but only if he knows the victim's name and face. This is a clever restriction, as it enables potential victims to protect themselves by remaining total strangers and hiding their identities, and it also enables them to guess at the killer's identity based on the assumption that all the victims' names and photographs were available to the killer.

The mystery is not resolved in the first volume. The full story is told across 12 volumes.  It is available in English translation with "unflopped" art – that is, it is still laid out to be read from right to left, as originally designed for Japanese readers. The font used for the English-language Death Note is both funny and creepy.

At the time of Death Note's publication in 2004, Japan was the only industrial democracy apart from the United States that still practiced capital punishment. (This remains true in 2013.) This, no doubt, helps drive the teenager's assumption that it is acceptable for him to target incarcerated people by imposing his own death sentence. He thus plays into the death god's ruse.