Hollywood celebrities protest hotel owned by the Sultan of Brunei

The Sultan of Brunei is one of richest people on the planet. He recently imposed a harsh form of sharia law upon his small country. Americans have reacted by boycotting his hotel. This article was originally posted to Helium Network on May 10, 2014. Photo: Sultan Omar Ali Saifuddin Mosque in Brunei, taken by Sam Garza of Los Angeles © Creative Commons Attribution 2.0 Generic license Wikimedia Commons. 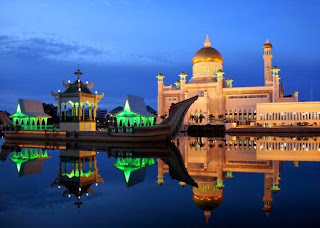 Hassanal Bolkiah, the 67-year-old Sultan of Brunei and one of the wealthiest men in the world, recently announced that the country would be held to a form of sharia law beginning May 1, 2014. "Sharia" refers to law based on Muslim religious principles. Brunei is majority Muslim; the one-third of the population that is non-Muslim will also be subject to at least parts of the law.

Sharia — spelled "Syariah" in news reports coming out of Brunei — is subject to variations and interpretations, and different regions have their own versions of it. In Brunei, the new law will be implemented in three phases.

In the first phase, women will be punished with prison and fines for becoming pregnant while unmarried or for violating the dress code. The law's Section 197, "Indecent Behaviour," defines as criminally indecent any act that "upsets eyewitnesses"; an officer of the new law admitted that indecent dress would be defined subjectively and that people should "look to public opinion" for guidance. People would also be punished for failing to attend Friday prayers.

Later this year, a second phase will see theft punished by amputation, while women who have abortions will be flogged, as will people who consume alcohol or who have sex with a person of the same gender. Next year, in 2015, a third phase will permit death by stoning for sex outside of marriage or with a person of the same gender. Blasphemy against Islam would also be punishable by death.

Brunei is a small country that borders Malaysia and the South China Sea and is near Indonesia and the Philippines. Fewer than a half-million people live there, and they enjoy a good material standard of living. Brunei's economy relies on oil exports.

The Sultan has a palace for each of his two wives. One of these palaces is bigger than the Vatican. In 1987, he spent an estimated $185 million for the Beverly Hills Hotel.

Many women residents of Brunei voluntarily cover their heads. Alcohol has long been banned there, and sexual acts between men has been illegal since colonialism, punishable by 10 years in prison. Scott Long speculated that "probably (as in Pakistan, which also formally embraced Sharia years ago) most gay cases will [continue to] be tried under that provision, because proof is easier." Several witnesses to the crime will be required under the new Sharia law before a person can be sentenced to be executed for same-sex acts.

News of this particular law was taken personally by some Americans, thousands of miles away from Brunei. They were concerned that the Sultan of Brunei owns the Dorchester Collection chain that manages the Beverly Hills Hotel and the Hotel Bel-Air, both in Los Angeles.

On May 5, a sign-waving crowd including comedian Jay Leno protested the hotel. Other celebrities calling for a boycott included Ellen DeGeneres and Richard Branson. On May 8, the Beverly Hills City Council voted unanimously for a resolution, urging Brunei to sell its property in Beverly Hills.

The boycott of a luxury hotel (or two) does not put much pressure on the Sultan of Brunei, who already has an estimated $20 billion, making him one of the richest people in the world. The people who will be more immediately affected, rather, are the roughly 1,000 employees of the two hotels. The CEO of the Dorchester Collection, Christopher Cowdray, warned that the boycott "will affect the livelihoods" of hotel employees in Los Angeles who have no connection to the Sultan of Brunei. Cowdray continued to say that "we are an exemplary employer, exemplary contributor to society and to the finances of this city." Another argument may be advanced that, if the Sultan were compelled to sell the hotel, he would simply stand to gain money from the sale.

It is nonetheless understandable why some people may wish to boycott. The activist culture in Hollywood, featuring many accomplished actors, is supportive of women's rights and gay rights. It is understandable that these rich celebrities would feel uncomfortable paying to hold and attend functions at a hotel owned by someone who is instituting a draconian law.

Throughout the United States, especially since the terrorist attacks of Sept. 11, 2001, some people have felt and spread fear that Muslim culture and religion will somehow overtake the country. This is unlikely, as only a fraction of 1 percent of Americans are Muslim.

Nevertheless, as an expression of this fear, several U.S. states have passed laws to prevent judges from considering "foreign laws" in their rulings. (Previously, some states had explicitly tried to ban "sharia," until federal courts ruled that it would be unconstitutional to specify sharia in the ban.)

The sense of proximity to sharia law that is felt by some Americans when walking into a hotel owned by the Sultan of Brunei — however tenuous that connection may be — may leave them feeling uncomfortable and personally threatened, in addition to the moral outrage they may assert when analytically considering the impact of sharia law on others who actually live in Brunei.

The new law in Brunei is an offense against human rights, according to the International Commission of Jurists. Many people will suffer greatly if these penalties are carried out; many others will suffer simply from the threat of these penalties. The reality of this surprisingly brutal penal code should remind people everywhere of the need to work for a more peaceful world.

International objections succeeded in delaying Brunei's implementation of the law. Years later, however, Brunei announced that, beginning April 3, 2019, it would execute people for having extramarital or homosexual sex; the execution would be carried out by stoning or whipping. George Clooney wrote an opinion piece for Deadline calling for a boycott of hotels that do business with Brunei. "Every single time we stay at, or take meetings at or dine at any of these nine hotels we are putting money directly into the pockets of men who choose to stone and whip to death their own citizens for being gay or accused of adultery," he said. The hotels are: