The panel "Jerusalem 2017: Crisis and Opportunity" was presented by the organization Ir Amim. The session was livestreamed at conference.jstreet.org. 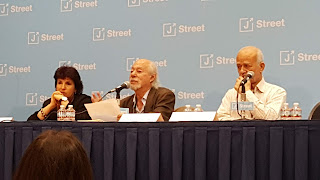 Hillel Schenker, Co-Editor, Palestine-Israel Journal: He has a "utopian" vision of Tel Aviv as the capital of Israel, and though it may not be achievable, he believes that "all three faiths should play a role" in shaping Israel's future. "The great advantage of Tel Aviv is that it has no holy sites to argue over," he said. He divides his time between Tel Aviv and Jerusalem were there is more religious conflict. "Today, most Israelis do not go to East Jerusalem."

Yudith Oppenheimer, Executive Director, Ir Amim: The Palestine-Israel Journal and Ir Amim have a joint project for young people called "Empowering East and West Jerusalem." About 40 percent of Jerusalem's residents are not citizens of Israel. People are aware that the prospects for a two-state solution are dimming, which is unfortunate because "any other option is not a resolution" to the conflict. She says that her utopian vision is different from Schenker's: "In my dream, Jerusalem is given back to its residents" and the city's future is worked out on a grassroots level.

Abu Zayyad: "I am in favor of building bridges, not walls. The wall is separating the Arabs from the Arabs." His own village has been split in two by the wall, preventing commerce even between two areas that are both within East Jerusalem. "This wall is a segregation wall. It's claimed to be for security, but it's not possible."

Oppenheimer: "We see the problems getting more and more extreme, and the methods used against the residents of East Jerusalem is getting harsher and harsher. The house demolition doubled itself this year."

Abu Zayyad: Some Arabs build without a permit because they are expensive and difficult to get. Housing is needed because the population is growing. They take a risk that their houses will be demolished.

Oppenheimer: The status of Palestinians in East Jerusalem needs an answer, as well as the "democratic challenge" that their collective existence poses to Israeli society. "Government is involved in all level of life in East Jerusalem, so to create that dual system so that they can take part, so-called, in municipal elections, which has very limited effect on their life, and not take part in national elections — that is a situation rejected by the Palestinians and with very good cause."

Oppenheimer: A new generation of children in Jerusalem is growing up in poverty. Today Jerusalem needs not only the value of "humanism" but also that of "pragmatism."

Oppenheimer: "We share the vision of an open city."

Abu Zayyad: "Our politics are poisoning our life." It is a dream, but it's not realistic, to have Israeli-Palestinian youth integration. The youth project referred to on this panel "is a drop in that ocean." Many Palestinians are "offended" by the idea of "normalizing relations with the occupation."

Schenker: His "realistic" vision for Jerusalem is a city that serves as the capital of two states.

"Jerusalem is constantly in the news, usually with headlines about violence and tension between Israelis and Palestinians. Talk of unilaterally moving the American Embassy to Jerusalem has sparked concern of adding fuel to the flames. The future of Jerusalem is one of the core issues of the Israeli-Palestinian conflict, and determining its future will be one of the most daunting tasks in achieving a negotiated peace. Join two Jerusalem-based NGOs, Ir Amim and the Palestine-Israel Journal, to discuss the possibilities and learn about their work together to empower Jerusalem’s youth."