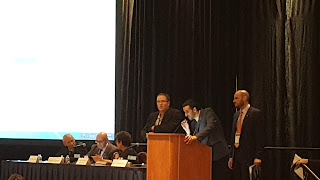 Ilan Goldenberg, Senior Fellow, Center for a New American Security demonstrated an outline of a "final security system." The purpose is to show the public what it would look like, to assist future negotiators, and to set the goal so it is possible to take steps to reach it. A key parameter is placing some limit on Israel's military presence in the West Bank while still upholding Israel's right of its own national defense. It is also important to establish timetables, or at least to establish rules for ongoing collaboration on how to schedule implementation of each step of the agreement.

Rolly Gueron, Ret. Mossad Division Chief: How to get from the "status quo" to a "permanent status agreement"? Avoid ideology and pursue "a constructive dialogue with reality." First, it is important to address security issues. Taking a long-term view, this means, in part, addressing the difficult conditions under which many people grow up. There is a three-fold proposal of "security measures," "civil-economic measures," and "policy clarifications." The goal is a Zionist state that is both Jewish and democratic, and any means to that end is "welcomed." The two-state solution is one possible means to that end. It is not itself an end.

MK Omer Bar Lev, Zionist Union: An agreement may need to deal with Gaza first and then deal with the West Bank. Today Hamas has a single leader; whether that is convenient for Israel can be debated. Most Israelis do not trust that they have a partner for peace. The international community also needs to be convinced that Israel "does not want to rule the Palestinians." He prefers the slogan: "Israel should be a secure democratic state with a clear Jewish majority." In the first stage of separating the Israeli and Palestinian states, there would be certain key steps, such as Israel ceasing to build in contested areas and Palestinians taking responsibility for governance in areas previously under Israel control.

Brigadier General (ret.) Israela Oron, Former Deputy National Security Advisor, Israel’s National Security Council: "The 'security argument' is used all the time in order to make the peace plan fail. It's not as if we don't have serious concerns about security." However, "Israel really enjoys a very good period of security. We really don't have serious security issues that we cannot really deal with." She said, "A temporary plan that is dealing only with the current situation, from my point of view, doesn't give a serious answer....We cannot talk about security plans disconnected from a peace plan." There are many needs, such as a neutral third party involved in policing a future arrangement, but this in itself is not a sufficient plan.

Bar Lev: There needs to be an ongoing process of convincing everyone involved that it is possible and progressing toward a two-state solution. Leaders need to demonstrate that it can be achieved without any negative impact on security. "We can and should begin a two-state solution today."

Gueron: Israel should suggest economic measures to improve life in East Jerusalem. No more radical steps are likely right now. "Any radical step in Jerusalem, by the way, can bring about hell."

Gueron: "I don't think it's fair to compare the Israeli extremists and the Palestinian extremists. These are different volumes and, I would say, different atrocities." "There is no ultimate solution to extremism...and nobody is immune to extremism." The first step is separation. Israelis and Palestinians cannot live "inside one another."

Bar Lev: If everyone in Jerusalem is allowed to vote, "we'll have a Palestinian mayor in Jerusalem." The borders of Jerusalem were drawn hastily after the '67 war. "It's not [merely] a stigma, it's true: We are occupying the West Bank."

Gueron: "Politics of morality in the Middle East do not work...Obviously, it's not moral to occupy territories, but it's not moral for a nation to commit suicide."

This panel was held Sunday, Feb. 26, 2017 at 1:45 p.m. Official panel description from the conference program:

"Engage with top Israeli and American security experts as they address Israel’s security needs, including the preservation of a two-state solution. Come hear about two complementary plans designed to ensure Israel’s security needs are met through a peace agreement with the Palestinians. Commanders for Israel’s Security (CIS), a non-partisan movement comprised of former senior Israeli security officials, will discuss “Security First,” a plan to improve Israel’s security and international standing that preserves conditions for a two-state agreement. The Center for a New American Security (CNAS) will then present “Security System for the Two-State Solution.” Join us to hear and discuss responses to the plans from veteran senior Israeli security and policy officials."