'Daylight to No Daylight: Switching Gears on US-Israel Relations'

The panel "Daylight to No Daylight: Switching Gears on US-Israel Relations" was moderated by Noa Landau, editor for Haaretz English Edition. 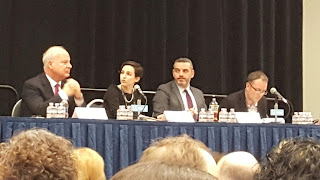 Ambassador Alon Pinkas, Former Israeli Consul General to New York: "There are two ways of looking at this [U.S.-Israel] relationship: One is that it has been normalized, which is something that we should take as a positive. It is no longer unique, it is just a very strong alliance, and every time there's friction, we shouldn't panic and assume that the sky is falling. The other approach is more ominous....it is that the United States is in the process of reprioritizing its foreign policy interests" and is deprioritizing the Middle East.

Ilan Goldenberg, Senior Fellow, Center for a New American Security: He noted that there are still some key leadership roles in the new U.S. administration for which no one has been nominated. Furthermore, the Trump administration isn't following a normal process of listening to advisors and then making an executive decision in favor of a single clear policy and sticking to it. "There's no clarity what's it's going to mean for Israel." Although "part of me takes comfort in the dysfunctionality and their inability to get things done, if you really oppose some of the initiatives," he said he worries about what will happen when the next crisis is not internally manufactured but rather external: "What happens when there's a real shock to the system?"

Khaled Elgindy, Fellow, Center for Middle East Policy, Brookings Institution: He noted a "lack of clarity" on the new U.S. administration's policy about settlements and a two-state solution. He mentioned Trump's comment about his willingness to go with either one state or two states, depending on what the parties want — that is, what Netanyahu wants. "I'm not sure he's [Trump is] entirely aware of what he's deferring to."

Pinkas: On the subject of David Friedman, who has been nominated to become the U.S. ambassador to Israel: "I would not ascribe too much importance to Mr. Friedman's views" in favor of Israeli settlements in the West Bank. He believes Friedman "confuses two simple things": He will be "the American ambassador to Israel, not the West Bank's ambassador to Washington. And the sooner he realizes this...the better for everyone.

Elgindy: "During the Reagan area, there was this notion of 'strategic convergence'" about cooperation between powers...It didn't really work then and I think it's unlikely to succeed now. Arab states are not going to go along with the idea of bypassing the Palestinians." They're "going to make their views known wherever they differ." He also said that, whereas President Obama contacted Palestinian leadership on one of his first days in office, now, under the Trump administration, he fears that now "we deal with the Palestinian leadership on a purely utilitarian basis" when it is relevant to security issues.

Goldenberg: Trump's statement on settlements encourages Israel to expand any settlement that they already have, which will make it harder to eventually move people out of the settlements in the service of a two-state solution, although "to his credit," Trump expressed opposition to new settlements. "Who's driving policy is still a little bit unclear." He also said that the Trump administration's comment that "Iran is on notice" is acceptable, but that it's important to know what one means by that and to have a plan for consequences when the line is crossed. Many Iranians already believe that they got the short end of the stick on the nuclear deal with the U.S., and Trump's "provocative" comments in this regard may not help international relations.

Pinkas: "There won't be a deal — not to disappoint anyone here, not because of Donald Trump. There won't be a deal because if you look at it historically — since 1967 in fact — or since the Oslo agreement was signed not far from here in 1993, the one enduring thing that Israelis and Palestinians always had in common and always stood side by side about is that it's always the Americans' fault. It's always the President's fault." He called this "an abundance of excuses". "There is nothing that Donald Trump can do [for peace in the Middle East] that John Kerry didn't try to do," or that Bill Clinton or George H.W. Bush before him didn't try to do. Furthermore, he says the Israeli-U.S. relationship is "unnatural," not part of the essential order of things, and thus may become obsolete: "Our shared values exist, but the relationship that emerged and grew into an alliance is a Cold War thing." The U.S. has decreasing interest in the Middle East in part because the U.S. is approaching "energy independence." "We know what a two-state solution is going to look like," but the Israeli and Palestinian parties don't seem "willing, capable or intent on doing anything to get there." The U.S. can do little in this situation.

Goldenberg: Netanyahu rejected a regional peace plan; the coalition government he built does not support it. Netanyahu is not likely to change his efforts in this regard.

Elgindy: "I was betting against the Kerry negotiations." He said he thought they had "almost no chance of success" in part because Israel "was occupying the other party that it is talking to." He added: "The United States has a responsibility in those repeated failures because they have not played the role of a mediator in trying to somehow level the playing field."

Elgindy: The United States hasn't accepted the concept of "Palestinian agency," treating them as an "object" in the peace talks and "punishing them for going to the U.N. He said: "Once Palestinians put their own house in order, that in itself is proof that they are a partner."

Pinkas: "Israel needs to think hard, and do everything it can, to maintain" its unique diplomatic relationship with the US. "From an American point of view, this has become...an issue in the sense that...from an American point of view, how does it differ from relations with Great Britain, or France, or Canada?" The peace process needs to be the central issue. "If our [Israel's] only added value" to the United States is a partner in the war on terrorism, it's no longer unique. Trump could easily lose his patience.

Goldenberg: He worked for Kerry and he believes that the importance of an Israeli-Palestinian peace deal was a "deep personal belief" for Kerry. "It is a holy grail in some ways. It's the diplomatic holy grail."

Pinkas: "The Trump administration could conceivably be one of the first ones that will not care about this."

Pinkas: It is "silliness" only held by the Israeli government that peace can be achieved while "bypassing the Palestinians." There is a possibility that "the two-state model cannot be preserved," but while "there are many flaws in it, I see more flaws by burying it."

Elgindy: "The real test of when a two-state solution is not feasible is when one or more of the parties do not want it anymore." The "fragile and precarious" political consensus (by Israeli politicians, not necessarily by the Israeli public) in favor of the two-state solution "has collapsed" in Israel. In the United States, language in favor of it has been "expunged" from the platform of "the Republican party that controls both houses of Congress and the White House...If nobody wants two states, you're throwing a party for people who don't show up, essentially."

Pinkas: He doesn't see "seriousness" in the Trump administration on foreign policy issues in comparison to past presidents. In response to someone who asked what news stories he thinks the concerned public should focus on ("What are we missing?" the audience member asked), Pinkas said: "Oh, you're not missing anything. The abundance of bad news is such that you don't know where to start. You're not missing anything because right now it's like a hiatus of sorts. Right now, everyone is trying to figure out what this administration is about. And it's not just the policies. They're trying to figure out whether they [the Trump administration] carry the credibility" of previous administrations. It's "an administration that begins with a credibility problem. Let's wait and see."

Goldenberg: He said that "the members of the Knesset are still two-staters." Polled support for a two-state solution jumps when the question specifies a situation in which the other side agrees to the deal.

Pinkas: "All in all, American public opinion is pro-Israeli but there are cracks in this support for a variety of reasons." This is happening among American Jews due to how non-Orthodoxy is treated in Israel, and the American public in general is "fatigued" by involvement in foreign conflicts that aren't perceived to serve American interests.

Elgindy: Post-9/11 "polarization" continues. The far right sees a dualistic "battle" between good and evil, while the far left "questions Israel's role in the region".

"American policy toward Israel appears set to undergo one of its biggest shifts in recent memory. President Obama and Secretary of State Kerry focused on resolving Middle East conflicts diplomatically — whether with Iran or between Israel and the Palestinians. Their view was that the US-Israel relationship did not require full and constant alignment on views and policy. The new administration — symbolized by the President’s choice of David Friedman as Ambassador to Israel — has signaled a clear intent to reverse course. It has de-emphasized pursuit of the two-state solution and re-surfaced the principle that there should be “no daylight” between the US and Israel. It may well take action that — intentionally or not — undercuts the Iran nuclear agreement. Join our panel of experts in exploring what this rapid shift means for Israel, for the region and for American interests."