'Between the Lines: Deciphering a New US Approach to the Broader Middle East'

The panel "Between the Lines: Deciphering a New US Approach to the Broader Middle East" was moderated by Nahal Toosi, Foreign Affairs Correspondent for POLITICO. 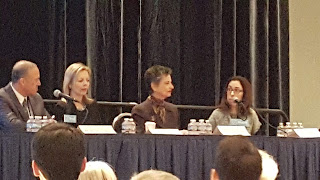 MK Akram Hasson, Kulanu Party: "It's very hard to have only two states. I believe that we need three states because Hamas will not accept any relation between Israelis and the Palestinians."

Lucy Kurtzer-Ellenbogen, Director, Arab-Israeli Conflict Program, United States Institute of Peace: "We've had a long history of administrations getting involved in this conflict with the best of intentions and then getting stuck." She said, "There is a body of 'lessons learned' out there." The new U.S. president goes back and forth on whether he endorses a two-state or a one-state solution, perhaps based in part on what he thinks the parties want. "If you want to look at what the parties would actually be able to agree to," there is a "consistent shared vision" of a two-state solution.

Barbara Slavin, Acting Director, Future of Iran Initiative, Atlantic Council: Iran's nuclear deal with the United States produced with the Obama administration doesn't forbid Iran from launching ballistic missiles, although there is a separate agreement that addresses this. This nuclear policy has not yet changed significantly since the transition from the Obama administration one month ago. However, the Trump administration's travel ban "disproportionately affected Iranians," approximately 30,000 of whom visit the United States every year for reasons like academic study and family visits. "Donald Trump is fulfilling their worst expectations about how he would treat the Iranian people (as opposed to the Iranian government)."

Hasson alleged, although he acknowledged that it may come as a "surprise" to many in the room, that Iran sends fighters to the Syrian civil war and supports Daesh (ISIS). "We know about many acts and agreements under the table that Iran did." Slavin responded: "I think Iran benefits in some ways from the existence of Daesh...but to say that Iran is directly supporting Daesh I think is a step too far.

Kurtzer-Ellenbogen said that "the idea of a regional approach to the Israeli-Palestinian conflict is not a new one."

In response to Toosi's question, "What does everything that happened since Trump won mean for Bashar al-Assad and the civil war in Syria?", Hasson said that he expects that Syria will split into two countries. It will be "impossible," he said, for Syrians to reconcile and live in the country the way it was before. Slavin acknowledged that Trump's alleged "secret plan" for Syria is still unknown. "Once Raqqa falls, I don't know what Trump's interests in Syria will be." She added, "This is probably one of the first priorities for H. R. McMaster, the new [U.S.] security advisor." She anticipated a "de facto" division of Syria into "dispersed" areas after the fall of Raqqa. "Assad in the long term I think is untenable. The man is a brute."

In response to Toosi's question about whether leaders have to "hedge their bets" in preparation for the new U.S. president's unpredictability, Kurtzer-Ellenbogen said it's unhelpful "to try to analyze every tweet in terms of its implications for policy" and that countries generally don't "know or feel secure" about what the U.S. president will do. Hasson said "I like" his unpredictability and expressed a desire to allow the president some time to reveal and implement his policies. "Maybe he has a new policy that we don't know. Maybe it will work very good."

Slavin spoke of the potential danger of Iranian nuclear escalation and said "I agree with Akram [Hasson] that many of those actions have been destabilizing." She perceives an increased risk of "actual hostilities as opposed to verbal hostilities."

Kurtzer-Ellenbogen: "I think we should still be looking toward the Arab Peace Initiative, and looking to it not just as a static document" but as a starting point for new discussions by Middle Eastern countries.

Slavin: "I think it's very encouraging that he [John Bolton] has not been chosen for a major role" in the new U.S. administration. She said that "Trump is not a regime-changer" and that his exclusion from a major role is "a rare bright spot."

Kurtzer-Ellenbogen: "I unfortunately don't share the optimism that the war in Syria will end soon...If we get to a point of stabilization...then, with Syria being there, right on the border, it would have a key role to play" in any Israeli-Palestinian peace process, but she thinks it will be a long time before Syria is ready to do this.

Hasson: "We see what happened in Iraq, Sudan, Syria and all these countries. It doesn't give big hope for our future." He indicated a preference for incremental change in human rights. "To take care of human rights in the Arab countries, it's not something very simple." He said that attempts for immediate change sometimes backfire. Of the current president of Egypt, Abdel Fattah el-Sisi, Hasson said: "We must give him big support and give him the time to succeed."

Slavin: The upcoming Iranian elections are unpredictable. An American return to the Bush-era "'axis of evil' rhetoric...always helps the hardliners." She suspects that President Hassan Rouhani will not be reelected because "I think it's in the Iranian interest to show a reasonable face to the world when the United States is showing one that isn't very reasonable."

Last question: What would you say to Trump?

Kurtzer-Ellenbogen: She said she would advise the U.S. administration to listen to its allies and "don't throw out the baby with the bathwater...There are things to be learned from past administrations: mistakes and successes. Radical change is not always the best approach, especially with foreign policy."
Hasson: "I need to see you like a father for everybody around the world."
Slavin: "Don't reinstate the travel ban...The Iranian people are not your enemy."

This panel was held Sunday, Feb. 26, 2017 at 9 a.m. Official panel description from the conference program:

"For several years now, US policy in the Middle East has been caught between a crying need for American leadership and an American desire to disengage. The new president faces tough policy choices — on Syria, Iraq, Iran and more — all made more difficult by some of his rhetoric and his desire to reset relations with other global powers. How this administration decides to wield US power in the region will have significant impact on both American and Israeli security. Join us for an exploration of the opportunities and pitfalls as the United States navigates a path forward through the intertwined and often contradictory geopolitics of the Middle East."