Today one might feel sentimental about the speeches given by then-President George W. Bush in the wake of the Sept. 11, 2001 attacks. On Sept. 20, he addressed the nation:

"Americans are asking: What is expected of us? I ask you to live your lives, and hug your children. I know many citizens have fears tonight, and I ask you to be calm and resolute, even in the face of a continuing threat...I ask your continued participation and confidence in the American economy. Terrorists attacked a symbol of American prosperity. They did not touch its source. America is successful because of the hard work, and creativity, and enterprise of our people. These were the true strengths of our economy before September 11th, and they are our strengths today."

"When they struck, they wanted to create an atmosphere of fear. And one of the great goals of this nation's war is to restore public confidence in the airline industry. It's to tell the traveling public: Get on board. Do your business around the country. Fly and enjoy America's great destination spots. Get down to Disney World in Florida. Take your families and enjoy life, the way we want it to be enjoyed."

In such a moment of crisis and confusion, many people craved greater moral leadership or more explicit instructions on what they could do to help others, and thus Bush was roundly mocked for having told the nation to "go shopping," as his words were commonly paraphrased.

But probably no president has ever told the nation to go shopping the way Donald Trump has just done. 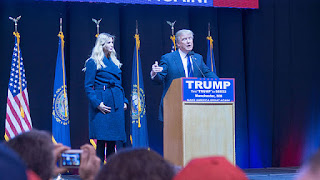 Donald Trump with his daughter Ivanka at a campaign rally in New Hampshire, ahead of the February 2016 New Hampshire primaries. Creative Commons 2.0. Wikimedia Commons.

In early February 2017, Ivanka Trump's clothing line was dropped by Nordstrom while other stores like TJX Companies and Belk have said they will scale back their promotions of the line. Ivanka's father tweeted on Feb. 8: "My daughter Ivanka has been treated so unfairly by @Nordstrom." This was retweeted by @POTUS, the Twitter account of the office of the President. The next morning, the president's counselor Kellyanne Conway spoke from the White House to the Fox & Friends television show: “Go buy Ivanka’s stuff, is what I would tell you. I hate shopping, but I am going to go get some myself today. This is just — it’s a wonderful line, I own some of it, I’m just gonna give a free commercial here, go buy it today, you can buy it online.”

Laurel Raymond explained that Conway's comments "appear to violate federal ethics law, which prohibits the endorsement of products by federal officials." Jill Disis quoted Rep. Elijah Cummings (D-MD) in his letter to the House Oversight Committee chair: "This appears to be a textbook violation of government ethics laws and regulations enacted to prevent the abuse of an employee's government position."

White House press secretary Sean Spicer said the use of @POTUS was appropriate:

"This is less about his family's business, and an attack on his daughter. He ran for president, he won, he's leading this country. I think for people to take out their concern for his actions or executive orders on members of his family, he has every right to stand up for his family and applaud their business activities, their success. When it comes to his family, I think he's been very clear about what they've accomplished. And for someone to take out their concern for his policies on a family member of his is just not acceptable, and the president has every right as a father to stand up for them."

As for Conway's comments, Spicer said she was "counseled on that subject, and that's it."

If there were a crisis, what would we be asked to buy then?

In November 2018, Ivanka Trump was pursuing trademarks for voting machines in China.

In March 2019, it was revealed that then-chief of staff John Kelly and White House counsel Don McGahn had originally balked at granting security clearance to Ivanka, but Donald Trump had insisted upon it. Staff had separate concerns about Ivanka and Jared as individuals; furthermore, as they are married, "concerns that surfaced during one person's security clearance investigation could stall or block both of them from receiving a full clearance." They were both granted clearances.

In June 2019, the White House released information showing that Ivanka Trump and her husband Jared Kushner earned, in 2018, "between $28.8 million and $135.1 million in outside income while working as unpaid senior advisers to her father." This is despite the fact that income from Ivanka's clothing and jewelry line dropped from $5 million in 2017 to $1 million in 2018.

Anne Applebaum wrote in an opinion for the Washington Post in June 2019 explaining that Kushner and his brother co-founded Cadre, a real estate investment vehicle. It recently received at least $90 million through a financial instrument called an “opaque offshore vehicle" through which secret money can be funneled to politicians.

"When he [Kushner] filled out his first disclosure form, he somehow forgot to list Cadre, though later, under pressure, he added the company’s name. ... The company is already the subject of a conflict of interest complaint because it benefits from 'Opportunity Zones,' part of a new tax law — a program that was specifically advocated by Ivanka Trump. ... It’s perfectly possible that Kushner, who has not commented on the Guardian report, himself has no idea who put this large sum of money in his company’s opaque offshore vehicle, which is what Goldman Sachs is claiming. But it’s also possible that, privately, he has a pretty good idea."

"There is nothing inevitable about this secret, offshore world. It is not a fact of nature: Our laws created tax havens, and our laws can also end them. ... There is no reason a completely secret, perfectly legal way to channel money to a government official, or anybody else, needs to exist at all. The fact that we have come to accept this as “normal” is one of the symptoms of a deeper democratic disease."

Occasionally, while on the phone with foreign heads of state, Trump has handed the receiver to his daughter, Ivanka Trump, so she can talk with the leader, according to an individual with firsthand knowledge. https://t.co/SX5E8fNcHy

More on authoritarian family dynamics: Sons in law of authoritarians have been especially corrupt, from Mussolini to Orbán, Putin (Wilbur Ross knows all about that one) Erdogan and our own Trump. https://t.co/YAVS7edBcl

On November 12, 2019, Trump told the Economic Club of New York that Ivanka has created 14 million jobs during his administration so far. No one knows what he's talking about.

Gayle Leslie on Medium: "Trump met with Chinese leadership and that afternoon his Stepford daughter, Ivanka, gets a bunch of trademarks to sell her crappy shoes and clothes in China. Jared’s white elephant at 666 Fifth Avenue is going under, then oh so coincidentally, after a “diplomatic” trip to Saudi Arabia some Arab firm bails the building out with a ninety-nine year lease."

On July 15, 2020, Ivanka used her Twitter account to advertise the Goya food brand after the Goya CEO praised President Trump.

If it’s Goya, it has to be good.
Si es Goya, tiene que ser bueno. pic.twitter.com/9tjVrfmo9z