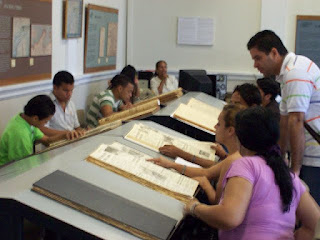 "Rather than reading a book in order to criticize it, I would rather criticize it because I have read it, thus paying attention to the subtle yet profound distinction Schopenhauer made between those who think in order to write and those who write because they have thought."
- Miguel de Unamuno, Ensayos, Vol. 2, p. 1013. Quoted in Clive James' Cultural Amnesia: Necessary Memories from History and the Arts (2007) New York: Norton, 2008. p. 767.

"...I'm not one of those arrogant fools who form their opinions as oysters form their pearls, and then shut them away where nothing can touch them. I have my own ideas and beliefs, but I can hear the rest of the world breathing."
- Amin Maalouf, Balthasar's Odyssey (2000) Translated from the French by Barbara Bray. New York: Arcade, 2002. p. 10.

"The hallway is washed in the smell of library: melancholy scholarship, paper and dust mites. There’s no trace of the shut-in old lady smell, the powder and outmoded perfume. Instead, there’s a hint of beeswax from the furniture, damp oil paint and turpentine, but above all the autodidact scent of knowledge. It is almost too much, too selfconscious, like a stage set built to house Leonardo da Vinci or Albert Einstein. This person is bookish. Neith glances down a hallway and sees, yes, more books."
- Nick Harkaway, Gnomon. New York: Alfred A. Knopf, 2018. p. 35.

”Throughout all the ages, men have been trying to fathom the meaning of life. They realize that if some direction or some meaning could be given to the whole thing, to our actions, then great human forces would be unleashed.”
- Richard P. Feynman. Lecture: "The Uncertainty of Values" presented at the University of Washington (Seattle) in 1963. Printed in The Meaning of It All: Thoughts of a Citizen-Scientist. Reading, Mass.: Helix Books, 1998. p. 32.

"We must not be willing to suffer through quiet lives of discontent."
- Stephen Butler Murray, "Deliverance Where the Streets Have No Name." Printed in Get Up Off Your Knees: Preaching the U2 Catalog. Edited by Raewynne J. Whiteley and Beth Maynard. Cambridge, Mass.: Cowley Publications, 2003. p. 47.

"The way out of the dehumanizing effects of modern capitalism and industrialism is not to change the system but to read good books."
- Thomas Moore. Original Self: Living with Paradox and Originality. New York: HarperCollins Publishers, 2000. p. 143.

"I never feel I have a duty to read something. I read because I love it like I love chocolate. I don't read a book because everyone else likes it."
- Isabel Allende. "Isabel Allende: Starts fresh writing, reading every Jan." Interviewed by BOOKS (Amy Sutherland). The Boston Sunday Globe, Jan. 19, 2014. p. N16.

"Wenn ein Buch und ein Kopf zusammenstoßen und es klingt hohl, ist das allemal im Buche?"
When a book and a head collide and there is a hollow thud, is it always in the book?
- Georg Christoph Lichtenberg

"Your employer [the queen] has been giving my employer [the prime minister] a hard time." "Yes?" "Yes. Lending him books to read. That’s out of order." "Her Majesty likes reading." "I like having my dick sucked. I don’t make the prime minister do it."
- Alan Bennett. The Uncommon Reader. New York: Picador, 2007. p. 86.

"A mind needs books like a sword needs a whetstone. That's why I read so much, John Snow. And you? What's your story, bastard?"
- The character Tyrion Lannister, played by Peter Dinklage, in Game of Thrones, Season 1, Episode 2